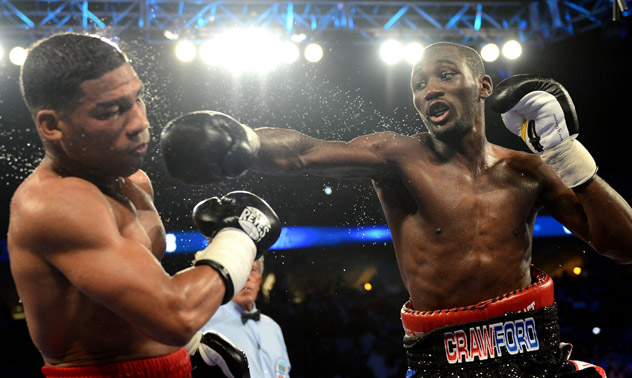 Terence Crawford is focused on defending his WBO belt against Raymundo Beltran in his hometown of Omaha, Neb., on Nov. 29 but the undefeated lightweight will, nevertheless, watch Saturday’s 144-pound bout between Manny Pacquiao and Chris Algieri.

“This is my last fight at 135 and then I’m moving up. I’ve been at this weight since I was 17, so that’s 10 years,” said Crawford, 27, who unanimously decisioned Breidis Prescott in a 140-pound bout in March 2013. “I just feel like it’s in my best interest to move up. But right now, I’m focused on my next fight against Beltran.”

Pacquiao (56-5-2, 32 knockouts) will defend his WBO welterweight title against rising WBO 140-pound titleholder Algieri (20-0, 8 KOs) having stated both his desire to fight RING 147-pound champion Floyd Mayweather Jr. before retiring as well as his consideration for a drop into the 140-pound division.

“I’m going to definitely look at the Pacquiao fight with Algieri,” said Crawford, whose clash with Beltran has been called a potential “Fight of the Year” by Top Rank Promotions CEO Bob Arum. “But I’m not even thinking about fighting either one of them right now. So that fight’s not directly on my mind right now but more in the future.”

Promoted by Golden Boy Promotions, RING junior welterweight champion Danny Garcia (29-0, 17 KOs), also the holder of the WBA and WBC titles, might also be a distant prospect for Crawford given “The Cold War” has ended between Top Rank and Golden Boy. Crawford, like Pacquiao, is promoted by Top Rank.

Having entertained rising into the 147-pound weight class, Garcia, 26, has worked out a step aside agreement with WBC mandatory challenger Viktor Postol that permits him to make a defense before facing the undefeated Russian.

“From 140 all the way up to 147, there are a lot of exciting fights to be made in those weight classes,” said Crawford. “But 140 is next for me and after my fight with Beltran, I’m ready to see what I can do with that division.”

In facing Beltran (29-6-1, 17 KOs) at The CenturyLink Center, Crawford (24-0, 17 KOs) is returning to the site where he scored a come-from-behind ninth-round stoppage victory over previously unbeaten former featherweight beltholder Yuriorkis Gamboa in June.

Crawford’s bout with Gamboa represented the first title fight in Omaha since heavyweight champion Joe Frazier beat Ron Stander by fifth round knockout in 1972. Crawford was coming off a unanimous decision that dethroned Ricky Burns as WBO beltholder on Burns’ turf in Glasgow, Scotland, in March.

“But if he thinks that this belt belongs to him – and he might feel that way – then he’s going to have to come and get it and it ain’t gonna be easy because I ain’t gonna give it to him.”

Crawford envisions a difference in styles between that of Beltran and Gamboa, whom Crawford defeated before 10,943 fans in Omaha.

“I think that Beltran’s style is way different from Gamboa’s. Gamboa was faster on his feet and his hands were faster but I think that Beltran packs a better punch. Beltran has better defense and he’s bigger, stronger and taller,” said Crawford.

“But that’s just going to make me have to work a little bit harder, so it’s going to be very exciting going back home for this fight. Since I fought in front of a big crowd the last time, I’m expecting the same thing this time and I’m just ready to take that all in.”