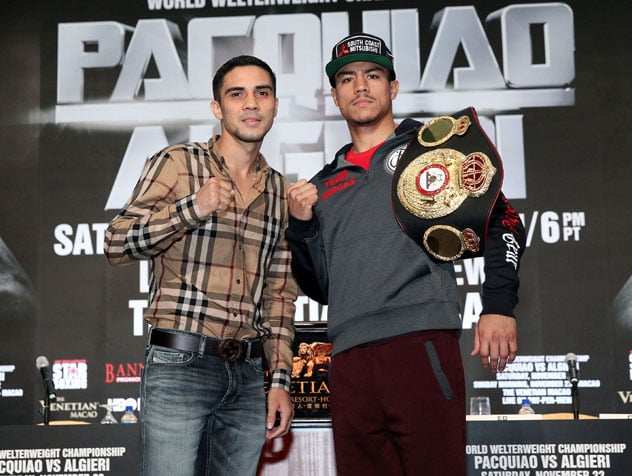 Junior welterweight Jessie Vargas has extra motivation in advance of Saturday’s clash with Antonio DeMarco in Macau, China, that being a potential bout with Manny Pacquiao.

A resident of Las Vegas, Vargas (25-0, 9 KOs) will face DeMarco in his first fight with four-division titlist Roy Jones Jr. as his trainer, having replaced former cornerman Ismael Salas.

While Vargas, 25, has reeled off consecutive unanimous decision wins over previously unbeaten fighters Khabib Allakhverdiev and Anton Novikov in April and August, respectively. DeMarco, 28, is 3-0 with two knockouts as a welterweight and could be stronger against Vargas with the drop into the 140-pound division.

The results of the RingTV.com poll taken from 17 insiders regarding Vargas-DeMarco are as follows.

Jessie Vargas W 12 Antonio DeMarco: I’m not sure how this arrangement with Roy Jones Jr. is going to play out for Jessie Vargas. He was doing really well with Ismael Salas in his corner and won his world title with Salas.

But he claims Jones has taught him a lot in the short time they’ve been together. I’ll give him the benefit of the doubt in this fight. Vargas should be able to outlast Antonio DeMarco, who, no doubt, will look to press the issue.

Vargas has the superior boxing skills and he’ll put them to use here to earn a decision in what will likely be his last appearance at 140 pounds.

Jessie Vargas UD 12 Antonio DeMarco: The combination of Antonio DeMarco’s inviting defense and Jessie Vargas’ adding considerably more muscle mass suggests the unbeaten titlist’s very best shot at a knockout. But I’ll err on the side of history and pick Vargas to once again go the full 12.

Jessie Vargas UD 12 Antonio DeMarco: It’s not much fun fighting Jessie Vargas. More like exhausting. Antonio DeMarco’s best chance is to control the pace. But that’s a little bit like trying to lasso a whirlwind. DeMarco just won’t be able to catch Vargas with a big punch or on the scorecards.

I expect him to go through the motions and post a one-sided decision despite the odd patch of stubborn resistance from the Mexican warrior. DeMarco will give it his all but I doubt he’ll put a dent in Vargas, who is too big for him.

Also, when DeMarco steps up in class, he struggles. If Vargas is an A-level talent, he’ll use his speed and timely punching to pound out a decision.

Antonio DeMarco SD 12 Jessie Vargas: If you’ve been watching Jessie Vargas fights for as long as I have, it might make a whole lot of sense when I say that my mind is blown that Vargas remains unbeaten.

On more than a few occasions, I’ve had Vargas losing only to be shocked when the scorecards were read in his favor. Antonio DeMarco represents yet another challenger that I think can outwork Vargas and snare away his WBA [“regular”] title.

Vargas is a jack of all trades and a master of none, which doesn’t make him a bad boxer but it takes a lot to put away the hard-nosed DeMarco.

Remember, this is the guy that steamrolled John Molina Jr. and his losses to Edwin Valero and Adrien Broner were an accumulation of punishment. I don’t see Vargas possessing the qualities to get DeMarco out of there, unless the judges are blind again.

Jessie Vargas UD 12 Antonio DeMarco: This fight figures to resemble Jessie Vargas’ last two fights in that he’ll win a decision over a southpaw by bigger margins than the mostly uneventful action suggests.

Vargas seems to have peaked but he is a better boxer and fresher fighter than Antonio DeMarco, who won’t be able to use his superior power to take the fight out of the judges’ hands.

We will have to wait to see the effect trainer Roy Jones Jr. has had on Vargas but it should be a positive one. On the other hand, DeMarco having prepared in the Philippines with Freddie Roach, he should be in his best form possible.

This should be an interesting and brisk chess match where the younger Vargas and DeMarco go the distance with Vargas outboxing him and taking a decision.

DeMarco is too tough and proud to allow himself to be simply outboxed and you can count on him staging at least one serious attempt to rough Vargas up and turn the fight into a brawl. Unfortunately, Vargas has enough youth, speed and ring IQ to figure him out and emerge victorious once again.

DeMarco can swat. He’s knocked out 23 opponents in his 31 career fights. Troubling though is the knockdown DeMarco suffered in his last match. Vargas is on a roll and I think he’ll continue his winning ways by pounding out a 12-round decision over DeMarco.

Jessie Vargas W 12 Antonio DeMarco: Jessie Vargas isn’t fighting in Las Vegas, so he might be less likely to get the audience-insulting scorecards that are becoming too common in his fights.

Still, with Vargas being mentioned as a possible Pacquiao opponent – no, really. Stop laughing – it’s hard to imagine that he doesn’t get the decision here against Antonio DeMarco.

Jessie Vargas KO 8 Antonio DeMarco: This is a great test for the undefeated Jessie Vargas. I like the younger, fresher fighter. Antonio DeMarco will cause problems for Vargas, but the 25-year-old may have too much for DeMarco. We’ll see how good Vargas is after this.

Jessie Vargas UD 12 Tony DeMarco: I think Jess Vargas’ youth, speed and boxing ability will be too much for Antonio DeMarco. However, DeMarco is a puncher and Vargas will have to box smartly for 12 rounds as one mistake could mean the end of his short title reign.

Though the young contender isn’t known for his knockout power, he does throw solid combinations and I wouldn’t be surprised to see him drop the Mexican banger at least once before the final bell rings.

Jessie Vargas W 12 Antonio DeMarco: Jessie Vargas is a competent boxer with a big will to win and has been mentioned as a future opponent for Manny Pacquiao. Look for Vargas to box and secure a victory over Antonio DeMarco by close yet undeserving decision.

Jessie Vargas W 12 Antonio DeMarco: A solid fight on the undercard of Manny Pacquiao-Chris Algieri. Antonio DeMarco has gotten a few confidence builders since losing to Adrien Broner a few years ago.

DeMarco is settled at 140, having been a champion at 135 pounds. While some haven’t been impressed by Jessie Vargas, he’s always found a way to win. I expect this to be a fast-paced encounter with Vargas youth prevailing on points in a good action fight.

By the overwhelming vote of 16-to-1, the insiders favor Jessie Vargas to win his junior welterweight bout over Antonio DeMarco.