Scott Quigg faces Otake next, but ready for Guillermo Rigondeaux 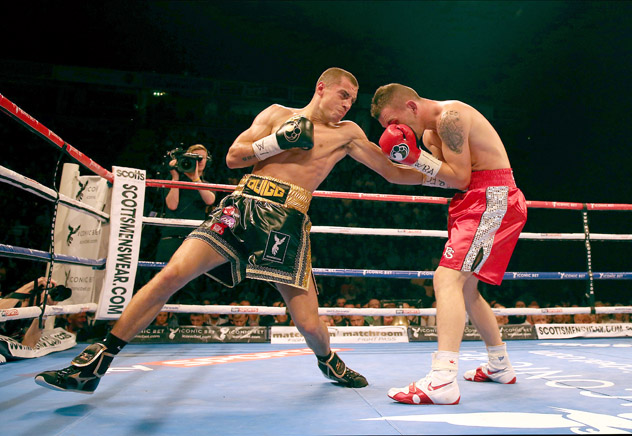 British star Scott Quigg, THE RING’s No. 3-rated junior featherweight, is gearing up to face a very tough challenge in Hidenori Otake this Saturday night in Liverpool, England, but his sights are firmly set on the cream of the 122 pound division.

[Editor’s Note – THE RING only recognizes Guillermo Rigondeaux as WBA champion at 122 pounds.]

“I won’t get a hold of Santa Cruz anytime soon,” Quigg told RingTV.com, with frustration evident in his tone. “He’s happy to stay in America and fight the likes of Manuel Roman and get paid good money for it. Would I go over there? I would love to fight Santa Cruz, in the States or anywhere else, and that is a guarantee.

“Right now there’s nothing I can do except beat who they put in front of me. I have repeatedly called for fights with Carl Frampton and Leo Santa Cruz, but if they don’t materialize then the time has come to take on Guillermo Rigondeaux.

“In an ideal world I would take on Frampton and Santa Cruz first but this isn’t an ideal world, so I simply want the biggest fight possible. Early next year, I have an obligation to fight the winner of Tyson Cave and Oscar Escandon, however a fight with Rigondeaux could supersede that.”

Boxing is the most fickle of sports. Fans descend on forums with outrage when Rigondeaux and Gennady Golovkin are avoided, then mock a fighter who shows the ambition to lay down the gauntlet. It’s a no-win situation but the talented boxer-puncher from Bury, England, promises that this challenge is both legitimate and well timed.

“Rigondeaux is the number one in the division and if you look back at interviews I did you’ll see that I gave myself 18 months to get ready for him,” Quigg said. “That was 18 months ago and I am 100 percent convinced that I can win that fight. I’m not going back on what I said because physically and mentally I’m in my prime and I’m running from nobody.

“Rigondeaux is a phenomenal talent, we know that, but I would get in there and be fully confident of winning the fight. He gets avoided because you don’t get huge money for facing him, and if you did get a couple of million then the queue to fight Rigo would be as long as my street. It’s about the glory and I want to be the best. A win over Rigondeaux would mean more to me than all the money in the world.”

Before Quigg can back up his words he must overcome the formidable challenge of Otake, who is not travelling 6,000 miles from Tokyo to make up the numbers. This will be the first time the Japanese native has fought away from home and he is super motivated to make a name for himself in the biggest fight of his career.

“There is a minimal amount of footage available on Otake, so I’m almost going into this fight blind,” said Quigg (29-0-2, 22 knockouts). “We know he’s aggressive, very durable and his only defeat came all the way back in 2007. From what I hear, he’s highly regarded and this fight has my full attention. I’ve left no stone unturned in training and people should expect to see the best of me.

“Otake said that he’s coming over here for the knockout so I expect him to be very aggressive from the start. That’s okay because I’ll have plenty of answers for him, over the course of 12 rounds, and he won’t have any answers for me.”

British fans can order Nathan Cleverly vs. Tony Bellew (which features Scott Quigg vs. Hidenori Otake) via Sky Box Office. The show is also available on the AWE network in the United States.