The unseen trilogy of Layla McCarter vs. Melissa Hernandez 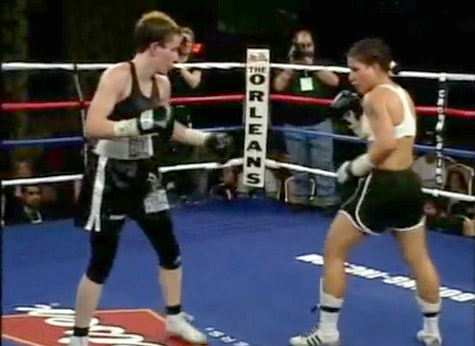 In the world of male boxing, a match between two of the best pound-for-pound fighters in the world would be on pay-per-view or, at the very least, premium cable, aired around the world to fans hungry to see the elite battle it out between the ropes. Add in that the fight is a rubber match, and even more eyeballs would be on it.

But in women’s boxing, that’s not the case, and it won’t be on Friday, November 21 either when Layla McCarter meets Melissa Hernandez for the third time at the Orleans Hotel & Casino in Las Vegas.

“The state of women’s boxing in the USA is sad,” McCarter, who has won world titles in four weight classes, said. “Old-school mindsets are keeping us out of the real opportunities. It will take some guys at the top to recognize that women’s boxing has depth and talent that needs to be included on major shows to change the status quo.”

“The solution is for these promoters to stop looking at us like meat and start looking at us like fighters; you don’t see them only signing pretty guys,” the always blunt Hernandez said, but the three-division world champion adds that even within the women’s boxing world there are two sets of rules.

Miami’s Hernandez (19-5-3, 6 knockouts) has never been one to hide her opinions, which made her a fighter most believed could be a crossover star with the right push. She could fight, she had a great personality, and she could talk trash with the best of them. But the 34-year-old admits that she had gotten so frustrated with the game that she stopped talking for a while, tired of wasting her breath for no return.

“I was quiet for about two years and it didn’t get me anywhere,” she laughs. “Everybody was telling me to get rid of the bad girl attitude, and that got me nowhere. So I went back to being the loudmouth that I am. It’s a huge difference, people are paying attention again.”

In 2013, she faced THE RING’s No. 2-ranked pound-for-pound fighter Jelena Mrdjenovich, and the two engaged in the sweeter science’s Fight of the Year, with the Canadian taking a six-round technical decision that Hernandez still debates. Since then, she’s gone 1-1, losing to Marcela Eliana Acuna and defeating Nicole Woods, and while there have been starts and stops, she will finally get a third bout with McCarter this week.

“I didn’t care to ever see her again, but she’s been moping around, her and (trainer) Luis (Tapia), so I had to do it,” Hernandez said of the rubber match with McCarter.

For her part, the 35-year-old McCarter (35-13-5, 8 KOs), widely seen as one of the best boxers in the world for years, has been on the shelf since stopping Noni Tenge for the WBA junior middleweight title in September of 2012. Like Hernandez, the Las Vegan didn’t expect a third bout to materialize more than seven years after their first two bouts, but it’s a fight, so she’ll take it.

“I thought it may happen but never really cared about it,” she said. “I stopped her (in the first fight) and she won by majority decision (in the second) so I felt I got the best of the two. However, since we are one-and-one I would like to settle any questions with a dominant performance our third time around.”

Back in 2007, the two met twice with the GBU lightweight title on the line. In the first bout on February 14, McCarter stopped Hernandez when the former Bronx resident retired in the corner after the eighth round due to a hand injury suffered in the second round. A little over two months later, Hernandez got her revenge by way of an eight-round majority decision.

Both fights were held at the Orleans and at lightweight, and that scenario will play out again this week, only with no belts on the line. This one’s all about pride.

“Melissa is always hungry for the win and comes to fight, and I have to bring my fire to the fight too,” McCarter said. “My focus is one hundred percent on the training and the fight and I underestimate nobody, especially someone who holds a win over me. It is vital to me as my career winds down to cement my legacy as the best ever.”

“I call her the B-Hop of women’s boxing because she’s so dirty, but she hides it well,” Hernandez said. “And then she fights in Vegas, so Vegas lets her get away with stuff. And she’s so awkward. She’s not the fastest, she’s not the slickest, but somehow it works for her.”

But what of life in the ring for this dynamic duo after Nov. 21? If a fight like this doesn’t bring the networks running, what will? Hernandez isn’t too optimistic, but she’s going to keep punching. It’s just what she does.

“I do not see a light at the end of the tunnel for me,” she said. “I was surprised that I even got a fight again and I’m still surprised that people see me as one of the best, because I never asked to be that. But as long as people keep coming to the fights, I’m going to keep fighting. I love it. I wanted to retire six, seven times because of the pay and the anguish we put our bodies through, but then I’m like, ‘What else am I supposed to do?’ I can go back to the art world, but I want to punch people. So on November 21 you’re gonna see me put on the show I always put on and make people want to come back. Layla, I can’t say so much about – she’s so dry she makes me look like Liberace.”