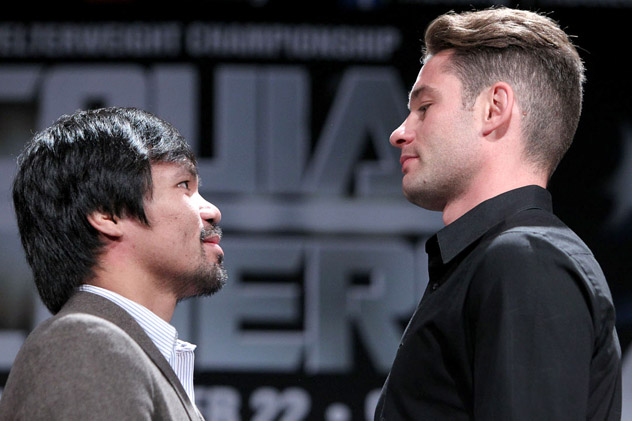 Ruslan Provodnikov, who lost his WBO 140-pound belt to Chris Algieri, was a sparring partner for Manny Pacquiao. Tim Bradley split bouts with Pacquiao and Erik Morales won the first of three fights against the Filipino star.

The three fighters offered their thoughts based on their experiences in advance of Pacquiao’s Saturday defense of his WBO welterweight title opposite rising WBO 140-pound beltholder Algieri on HBO Pay-Per-View.

Pacquiao (56-5-2, 38 knockouts) is 2-2 in his past four fights, including a loss by disputed split decision against Bradley in June 2012 and another by sixth-round stoppage against Juan Manuel Marquez in December 2012. In his last fight in April, Pacquiao, 35, regained the WBO welterweight title by unanimous decision over Bradley.

The loss to Bradley ended Pacquiao’s run of 15 straight victories, eight of which had come by knockout, having previously suffered defeat against Morales by unanimous decision in March 2005.

During his winning streak, Pacquiao had twice stopped Morales, earned split and majority decisions over Marquez, knocked out Oscar De La Hoya, Miguel Cotto and Ricky Hatton and decisioned Marco Antonio Barrera, whom he had also stopped in 2003.

Algieri (20-0, 8 KOs) took Ruslan Provodnikov’s WBO 140-pound belt by a split decision in June, his last bout. Algieri, 30, rose from three first-round knockdowns and fought with a right eye that was nearly closed. The resident of Long Island, New York, will be making his first professional appearance on foreign soil.

Provodnikov, Bradley and Morales offer their opinions during separate Q&As provided in the following release:

What is Pacquiao’s best strategy to employ against Algieri’s length?

Manny will have to pressure Algieri throughout the fight and not give him a chance to let him rest. Body work and multiple combinations. Manny will also have to utilize speed. His speed of punches and speed of movement.

What did you learn about Algieri’s toughness in your fight against him?

Algieri adjusted well in my fight and was able to show that he is a tough fighter. He had the heart of a lion that night. He had a game plan and he stuck with it, even when I had him on the canvas twice in the first round. He’s very smart.

Considering your experience sparring Pacquiao, how would you describe his fighting style?

Manny is very fast, aggressive and sharp. You cannot predict what he will do in the ring, which can be a big distraction. And despite his size, he does have good power and in both hands. His footwork is magnificent.

What can Pacquiao learn about Algieri from watching your fight against him?

Finish what you start. In my case, finish the fight once you get him hurt.

What will be the key to victory for Algieri?

Does Algieri deserve this opportunity against Pacquiao?

Most definitely. Algieri earned his spot.

How do you see Pacquiao going into this fight?

Pacquiao today is more of a thinking Pacquiao. Since his knockout loss to Marquez, he doesn’t come in reckless or with a gang of shots. He is thinking about his plan of attack.

What will be Algieri’s concerns in the ring?

You don’t want to be against the ropes against Pacquiao. His footwork is like no other in boxing. He throws punches while he is moving.

What should Pacquiao be concerned about?

I think after watching video tape of Algieri, he’s going to give Pacquiao a lot of problems. Algieri has excellent movement and range. If he is able to control distance inside the ring, it’s a problem for Pacquiao.”

What does Algieri need to do to have a chance at beating Pacquiao?

He needs to use his boxing skills. Move and jab and make sure he stays away from Pacquiao by using his size and reach.

How have Pacquiao’s skills in the ring changed as he’s gotten older?

Every boxer changes as they get older. Some become more aggressive and some more cautious. Pacquiao is a more complete fighter now than when I fought him. He seems more patienct and more intelligent in the ring.

What is the key to timing Pacquiao’s rhythm?

I don’t think it is about his rhythm. It is about you making him fight your fight. I did it the first time I fought him. Juan Manuel Marquez has his number and Algieri has to dictate the pace of the fight. He wants a boxing match and not a brawl with [Pacquiao].

What is the biggest key for Algieri defensively in this fight?

He needs to keep away from Pacquiao’s power, keep him busy with the jab and make sure you land first. And when he gets aggressive, just counter him. Distance will be a big key.

How much will Pacquiao’s experience advantage affect the outcome of the bout?

Experience is important in any fight. Pacquiao has been in some very big fights and knows how to perform in big fights. I am sure that if he wins, one of the factors will be his experience in big fights.

JESSIE VARGAS ON PACQUIAO-ALGIERI: EXPERIENCE WILL BE THE DECIDING FACTOR

Jessie Vargas (25-0, 9 KOs) will face former lightweight titleholder Antonio DeMarco (31-3-1, 23 KOs) on the Pacquiao-Algieri undercard with a a potential shot at Pacquiao looming if he is victorious.

Not only will Vargas face DeMarco in a junior welterweight bout in Macau, China but he will do so in his first fight with four-division titlist Roy Jones Jr. as his trainer.

Although Pacquiao is said to be considering a drop into the 140-pound division, Vargas said he has spoken to Top Rank Promotions CEO Bob Arum about rising in weight.

During an interview with RingTV.com, Vargas assessed Pacquiao-Algieri.

“So I think that’s going to be the deciding factor. With Manny Pacquiao having been experienced in knowing how to set up angles and how to change directions, I just think that aspect along with his power might throw off Algieri. But it’s going to take Manny Pacquiao a few rounds to really get his accustomed to Algieri because of his height and reach. So Algieri is going to use that reach and move around and try to outbox Manny and it will take Manny a few rounds to adjust and really get a handle on him. But we’ll see. It’s going to be an entertaining match-up.”