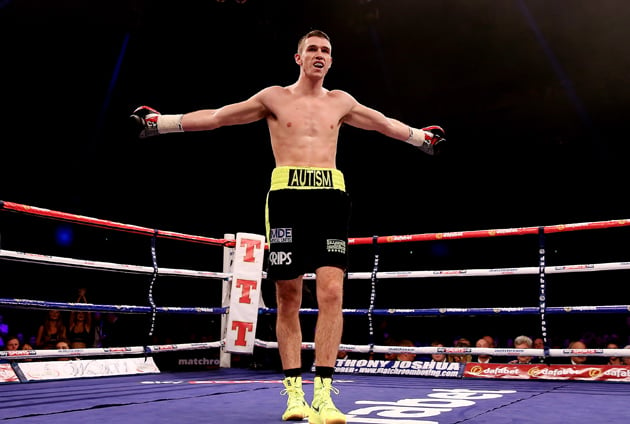 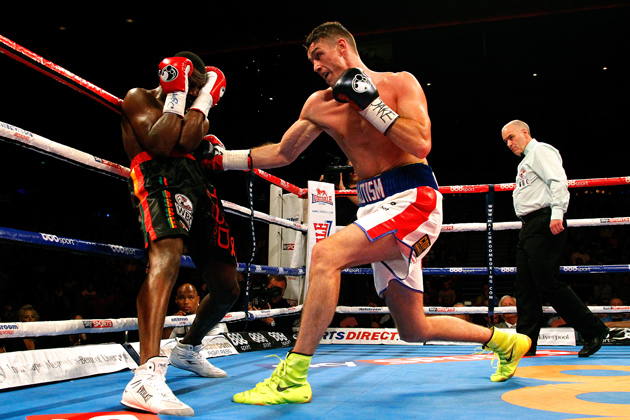 Callum Smith (right) in action with Vladine Biosse during their fight on July 12, 2014 in Liverpool, England. Smith scored a 10-round decision over the American. Photo by Paul Thomas/Getty Images

Unbeaten super middleweight Callum Smith is currently undergoing the metamorphosis from prospect to contender and victory on Saturday over Montenegro-based Serbian Nikola Sjekloca could open up the possibility of a massive domestic scrap against fellow Brit George Groves.

“As long as we keep winning then it will happen,” said Smith, who meets Sjekloca in a WBC eliminator in Liverpool. “I don’t want to look too far past Nov. 22 but if I can do a good job then it’s onwards and upwards. We’ll make the proper decision after I get past Sjekloca but George and I are definitely going to cross paths at some stage.

“I’m lucky to be in a division with so many quality fighters because having great opposition is what it’s all about. Sugar Ray Leonard isn’t who he is without Roberto Duran and Thomas Hearns. We saw with Froch and Groves how big these domestic fights can be and if I’m lucky enough to be part of one then that can only benefit me.”

Groves, who also appears on the stacked Liverpool show, is currently the WBC No. 1 contender and a fight with reigning title holder Anthony Dirrell is top priority in 2015. The hard punching Londoner is ranked No. 4 by THE RING at 168 pounds and there are those who believe Smith’s learning curve remains incomplete.

“I’ve improved across the board,” said Smith, who turned professional in November 2012. “My power has improved but I also focus on throwing the right shots at the right time. A lot of young pros set a high pace, fire off loads of shots, and then wonder why they can’t secure a stoppage. If you work hard on picking your punches then you become a lot more effective.

“I’m a much better fighter than I was when I turned professional two years ago.”

Smith has solid proof when it comes to this philosophy. Following decision wins in his first two pro outings he scored six, yes six, first round knockouts in a row. Not once did he rush his work and when Matchroom Promotions upped the quality of the opposition, the 24 year old upped his game and passed each test with flying colors.

Smith said, “I’ve been in with a good variety of opposition which has been rewarding. There’s no point continually fighting the same style because sooner or later you’ll get found out. I’ve faced short, tall, orthodox and unorthodox fighters and dealt with them all fairly well, which proves that I can adapt.

“Quality sparring has also been vital because you don’t learn much when you knock out six guys inside a round. I’ve had terrific sparring with all the top domestic players, on and around my weight class, and gained invaluable experience during that time. This made up for the lack of ring time I had in some of my pro fights.”

Smith is aware of the expectations which people have but, as a personality, he is the polar opposite of the hype which continues to grow around him. Laid back to a fault, he allowed this writer to coax the George Groves conversation out of him but was keen to point out that all plans go out the window should he not perform well on Saturday.

“Nikola Sjekloca is a real challenge and you only have to look at his record to see that,” said Smith, who is the youngest of four brothers who all box professionally at a high level. “In 30 fights he’s only lost to Sakio Bika and Arthur Abraham, men who have held world titles. This is a massive jump and I know I’m in for a tough night, but I think it’ll bring out the best in me.

“Sjekloca is a very good boxer who likes to keep it long and, at 6ft 1, he’s accustomed to doing that. He likes to throw straight punches and get back into position, so we’re focusing on selecting the shots that’ll work against him. I’m 6ft 3, so he won’t have a height advantage over me.”

If Smith, known as “Mundo”, turns in yet another dazzling performance then the top players at 168 pounds will undoubtedly be looking over both shoulders.

British fans can order Nathan Cleverly vs. Tony Bellew (which features Callum Smith vs. Nikola Sjekloca) via Sky Box Office. This show is also available on the AWE network in the United States.