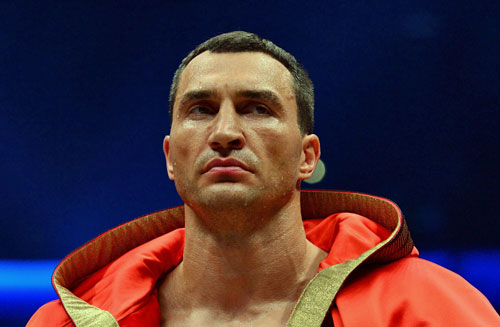 Wladimir Klitschko: Emanuel Steward, Klitschko’s late trainer, understood the marketing value of a spectacular knockout. That’s why he always pushed his monstrous heavyweight to take the steps necessary to end fights early. Steward would’ve been proud on Saturday night. Of course Kubrat Pulev played right into the big man’s hands by fighting aggressively, which made him a relatively easy target for Klitschko’s big blows. Klitschko did his part by seizing the opportunity, though. The champ put the No. 1 contender down four times in four-plus rounds, all with a punch with which he isn’t normally associated: the left hook. The final one rendered Pulev unable to continue 2:11 into Round 5 before delighted spectators in Hamburg, Germany. And remember: Pulev was no pushover. He entered the ring undefeated and Klitschko’s rough equal in terms of size, credentials that offered the promise of a somewhat competitive fight. He left the ring just another pathetic victim of the most-dominating fighter in the world, one who is even more dominating than Floyd Mayweather Jr. and Gennady Golovkin. We all know that this was his 17th consecutive successful title defense, eight shy of Joe Louis’ record, and 23rd successful defense over two reigns. He also has won 21 consecutive fights. And consider his recent performances: Klitschko has lost exactly one round on one card in his last five fights, going back to 2012. He has an edge of 113-1 in completed rounds in those bouts, losing only a single round on one card against Mariusz Wach. That’s about as dominating as it gets. OK, yes, the heavyweight division isn’t strong. That’s not Klitschko’s fault, though. As they say, he’s beating the guys in front of him. And he’s beating them good. I want to see what happens when (if?) Klitschko fights Deontay Wilder. And I suspect Anthony Joshua could succeed Klitschko(63-3, 52 knockouts) as the top big man in the sport. For now, I feel strongly, no one can touch him.

Kubrat Pulev: Pulev (20-1, 11 KOs) deserves some credit for his willingness to engage Klitschko and his ability to survive a brutal beating as long as he did, a testament to the Bulgarian’s toughness and conditioning. And he seemed to give Klitschko some difficultly in the opening minutes of the fight, as he apparently attempted to knock Klitschko off his game with his aggression and roughhouse tactics. I didn’t like all the rabbit punches he threw during clinches but I also don’t like Klitschko’s propensity to hold. Alas, none of that mattered much after Klitschko landed his first big left hook, which put Pulev down in the opening round. It was downhill from there for Pulev. His face was badly beaten and he seemed to be in shock to some degree afterward, as if he wasn’t sure exactly what had hit him. I’m sure most of Klitschko’s opponents feel that way. We shouldn’t be too critical. Pulev’s fate was more a result of Klitschko’s ability than his own failures. At the same time, Pulev undoubtedly hoped – even expected – to set himself up for life by shocking the world with a victory over the undisputed heavyweight king. In the end, he was no better than any of Klitschko’s other victims and worse than most. Now all Pulev can do is continue to develop, continue to beat his fellow contenders and wait for Klitschko to retire.

Gilberto Ramirez (30-0, 24 KOs) continued his impressive run in the super middleweight division, stopping Fulgencio Zuniga (27-10-1, 24 KOs) in eight rounds Saturday in San Antonio. Ramirez has a lot going for him – ability, power, looks and Mexican citizenship. We just have to wait to see how he’ll fare against top-tier opponents. ÔÇª RING junior flyweight champion Donnie Nietes (34-1-4, 20 KOs) stopped Carlos Velarde (26-4-1, 14 KOs) in seven rounds Saturday in Cebu, Philippines. Nietes, who also holds the WBO title, is now 10-0-1 in world title fights dating back to 2007. That’s an impressive run. ÔÇª Yuriorkis Gamboa (24-1, 17 KOs) bounced back from his brutal loss to Terence Crawford by stopping Joel Montes de Oca (18-4, 10 KOs) in six rounds Saturday in Cancun, Mexico. Gamboa dropped down from lightweight to junior lightweight for the fight, although Gamboa and Montes de Oca fought at 131¾ and 131 respectively. Gamboa’s biggest problem against Crawford was his size. I think the Cuban can still be a force at a more-natural 130 pounds. ÔÇª Anthony Mundine (27-6, 27 KOs) won’t go away just yet. The 39-year-old Australian junior middleweight seemed to hit the end of the road when he lost a one-sided decision to Joshua Clottey in April but rebounded to defeat previously unbeaten Sergey Rabchenko (25-1, 18 KOs) by a split decision Wednesday in Melbourne.