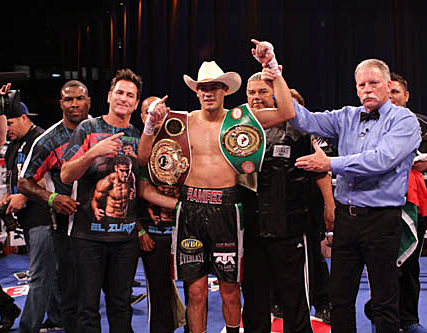 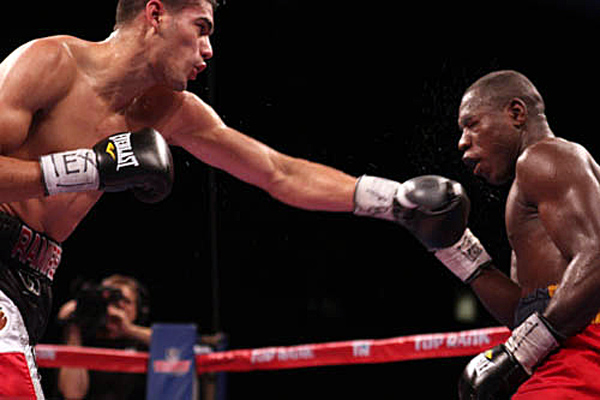 If Gilberto Ramirez was looking to separate himself from the rest of the super middleweights knocking at the door of title contention on Saturday, he certainly did that.

Ramirez overwhelmed and stopped double tough former title challenger Fulgencio Zuniga in Round 8 of the HBO Latino-televised main event at the Alamodome in San Antonio, Texas.

“Zurdo” has substantial physical advantages over every 168 pounder in the world, standing nearly 6-foot-3 in a southpaw stance. Though he doesn’t use them in a conventional “big man” sense, preferring to lead with left hands rather than jabs, his size and activity managed to fluster Zuniga (27-10-1, 24 knockouts).

Throughout the night, the 23 year old landed sharp lefts, and immediately got inside to dig to the body. At times, his attack became predictable without a jab predicating it, but his aging opponent couldn’t do much about it anyway.

The stoppage was more or less a merciful one, as Zuniga’s head was beginning to snap back more and more as uppercuts and straight lefts rained in with him trying to survive along the ropes.

After the fight, the prospect shot for the moon with the help of translator Ricardo Jimenez, suggesting that he would love to fight Carl Froch or Julio Cesar Chavez Jr. in the near future.

With the win, Ramirez (30-0, 24 KOs) becomes the first man to stop the Colombian since Lucian Bute in 2009, and just the third man to do it overall.

Garza was on his bicycle from Round 1 onward, unable to stand and trade with Valdez, who was able to load up and throw almost exclusively power shots all night long with nothing substantial coming back.

Valdez (12-0, 11 KOs) set the tone early on, wobbling Garza in the middle of the second round with an overhand right. He’d do the same with a hard uppercut in Round 4, but the veteran managed to remain standing both times.

Just as the fight was settling into a pattern however, the 2012 Mexican Olympian caught Garza once again, sending him to the ropes on unsteady legs. After a series of unanswered shots, the referee waved the fight off.

The loss marks the fifth time Garza has been stopped in his career, and likely earns him full-on gatekeeper designation at this point.

Top Rank VP of Boxing Operations Carl Moretti told RingTV.com that they wish to have Valdez fight five times in 2015, with hopes of him being in title contention the following year.

Najera is rumored to be a possible opponent for likely Prospect of the Year candidate Felix Verdejo in early 2015.

Despite the lofty hopes, Najera had more difficulty than one would have expected with a journeyman such as Cervantes. Often times he found himself along the ropes looking to load up left hooks, and was met with some sharp shots as he waited.

“I was definitely looking for a knockout,” admitted Najera. “But this opponent was tough, I said that leading up to this fight.”

On the topic of the Verdejo fight, Najera was unsure about whether or not he wants to go that route, even if the fight were officially offered.

“I heard the rumors about the fight against Verdejo on HBO PPV possibly. But I don’t know, I’m working my way down to 130,” said Najera. “I don’t fight for the money.”