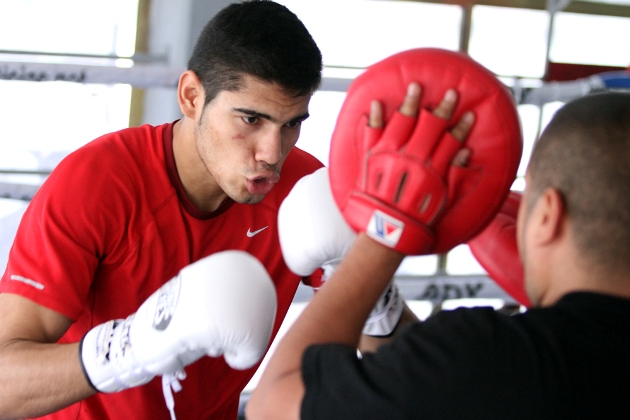 He has knockout power.

He is from the Mexican state of Sinaloa.

Those attributes could describe Julio Cesar Chavez, Jr. Instead, they describe Gilberto Ramirez, who could surpass Chavez on the popularity and ranking scale if he continues his winning ways.

Ramirez hopes to close out a successful 2014 campaign with a win on Saturday night, when he faces Fulgencio Zuniga in a 10 round bout at the Alamodome in San Antonio, Texas.

The bout, along with the Oscar Valdez-Alberto Garza bout, will be promoted by Top Rank and televised on HBO Latino, beginning at 9:45 p.m. ET/ 6:45 p.m. PT.

Ramirez (29-0, 23 knockouts) has become a contender because of his winning ways and exposure he has gotten in recent fights.

Ramirez stopped Giovanni Lorenzo in the fifth round in Las Vegas, Nevada on April 11. The bout took place one day before the Manny Pacquiao-Timothy Bradley rematch. In his last fight on July 19 in Macau, China, Ramirez overwhelmed Junior Talipeau, dropping him three times before stopping him in the first round.

He faces a dangerous puncher in Zuniga on Saturday night. While Zuniga has lost five out of his eight fights, he does have 24 knockouts in his 27 victories.

While there are potential lucrative fights on the horizon for Ramirez in 2015, he cannot afford to overlook Zuniga.

“Zuniga is a strong fighter with a lot of experience,” Ramirez told RingTV.com earlier this week. “He’s been in a lot of wars throughout his career. I’m not intimidated by him. I’m very focused and I’m anxious to go in there on Saturday night and prove what type of fighter I am.”

So far, Ramirez has demonstrated many attributes as a pro. The southpaw has power in either hand, but he has improved his boxing skills during the last couple of years.

While Ramirez enjoys training in his hometown of Mazatlan, he has benefitted from the sparring at The Rock gym in Carson, California in Los Angeles County. Ramirez has become a more well-rounded fighter because of the quality of sparring he is receiving on this side of the border.

“The sparring has been very helpful to my development as a fighter,” said Ramirez, who is promoted by Top Rank and managed by Hector Zapari. “Not only has the sparring in (Southern) California helped me physically, but I feel more confident in myself. The preparation and sparring have given me the added experience, which is why I’m eager for Saturday night.”

The work Ramirez has done in the ring has not gone unnoticed. He is currently ranked in the top five of all major sanctioning bodies as a super middleweight. He is ranked higher in a few sanctioning bodies than his Julio Cesar Chavez, who also calls the Mexican state of Sinaloa his home.

Chavez is embroiled in legal problems with Top Rank, especially since he has signed with advisor Al Haymon. This has allowed Top Rank to focus more on promoting Ramirez, who is eager to fight often and take advantage of television dates Top Rank has with UniMas or in this case, HBO Latino.

Ramirez is eager for a fight with Chavez, along with other notable super middleweight contenders and world title holders.

“I have to maintain my focus for Zuniga on Nov. 15. I have to win that fight. I can’t wait to fight the top guys in the division. Chavez, Carl Froch, Arthur Abraham. I feel ready and I want to demonstrate I am capable of beating those top fighters.”

Fulgencio Zuniga will be a stern test for Ramirez. The boxing world will see how well Ramirez will handle adversity or if he is indeed ready to face the A-level side of the 168-pound division.

Ramirez is one to keep an eye on in 2015. With a high-upside in the ring, Ramirez wants to continue proving he can improve with each fight and make history in the process.

“I’m focused to be a great fighter. I want to be the best. I take every fight as if I’m fighting a champion. I’m hungry to come out on top and I can’t wait to see what 2015 has in store for me.”

Francisco A. Salazar has written for RingTV since October of 2014 and has covered boxing in Southern California and abroad since 2000. Salazar also covers boxing for the Ventura County (CA) Star newspaper, Boxingscene.com, and Knockout Nation. He can be reached by email at [email protected] or on Twitter at FSalazarBoxing