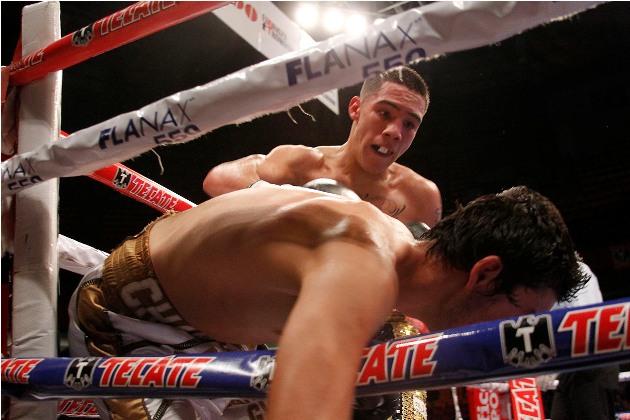 The unbeaten junior featherweight prospect has breezed through average opposition since making his professional debut two years ago this month. The two-time Olympian from Mexico has demonstrated remarkable in-ring abilities for a 23 year old (he turns 24 on Dec. 22).

It’s scary to think just how much better Valdez can be two to three years from now.

In the meantime, Valdez will face the toughest opponent of his pro career thus far on Saturday. He will fight former world title challenger Alberto Garza in an eight-round featherweight bout at the Alamodome in San Antonio, Texas.

The bout will precede the main event bout between Gilberto Ramirez and Fulgencio Zuniga. Both bouts will be televised live on HBO Latino, beginning at 9:45 p.m. ET/ 6:45 p.m. PT. Top Rank will promote the card.

Within the last two years, Valdez mowed through his opposition, stopping his first 11 opponents and picking up a regional title belt along the way. His eight-round unanimous decision win over Juan Ruiz in his last fight on July 26 in Phoenix was the first time Valdez fought to the final bell.

Garza is a good test for the Valdez. Even though he has lost three of his last four bouts, Garza hits hard and has faced some of the best fighters in the featherweight division, including Nicholas Walters, Nery Saguilan, and Robinson Castellanos.

While Valdez is considered a can’t-miss prospect in the sport and could have a breakout 2015, he is not overlooking Garza on Saturday night.

“Garza is a very experienced fighter,” Valdez told RingTV.com in a phone interview earlier this week. “Like any fighter, I’ve trained for this fight 100 percent. I approach any fight as though it’s a world title fight. I’m ready (for Saturday).”

Valdez, who is managed by Frank Espinoza, has benefited from sparing the likes of many world champions and contenders in Southern California.

While there may be young fighters who choose to continue to fight soft opposition, Valdez and his team are eager to push Valdez into facing stronger opposition.

It is the necessary steps to get better as a fighter and to prove he is not a flash-in-the-pan fighter.

“I learn a lot with each fight,” said Valdez, who calls Nogales, Sonora, Mexico his hometown. “I keep fighting and competing and I understand that with each fight, the level of opposition will be tougher. I have to prepare to the best of my ability.

“I set out every day with the goal that I will be a world champion. I have to train as such. I do the best I can do fight as a puncher or a boxer, whether it is to throw and land combinations from the outside or inside.”

While boxing experts and writers may be quick to predict what Valdez will do in the immediate or long-term future, Valdez and his team know they cannot get ahead of themselves.

Valdez is still young and adapting to the pro game after fighting for years as an amateur. While his style is fan-friendly and appealing to many fight aficionados, sending Valdez to the deep end of the pool to soon could hurt his career.

Still, Valdez is eager to improve as a fighter, looking forward to realistic challenges in 2015.

Oscar Valdez has a lot of upside. Many publications are mentioning Valdez as a candidate for ‘Prospect of the Year’ and with good reason.

Valdez knows he is a good fighter, but has the mentality that he wants to get better. Those are the fighters to keep an eye on.

But he does not want to take all of the credit. His confidence and blue-collar approach to the sport may be the secret to his success and where his career could end up one day.

“I have a great team (including trainer Manuel Robles). I don’t want to take all of the credit.

“I just want to improve every day and do the best I can.”