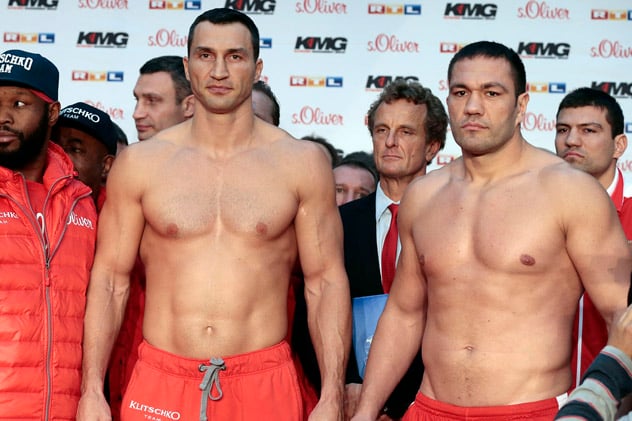 Wladimir Klitschko (L) with Kubrat Pulev at the weigh-in for their Nov. 15 fight in Germany. Photo by Oliver Hardt – Bongarts/Getty Images.

Three of Pulev’s biggest wins were an 11th-round stoppage of Alexander Dimitrenko in May 2012, an 11th-round knockout of Alexander Ustinov in September 2012 and a unanimous decision over two-time title challenger Tony Thompson in August 2013.

By comparison, Klitschko, 38, has twice knocked out Thompson, doing so in the 11th round in July 2008 and in the sixth round in July 2012. In his last fight, with Pulev sitting at ringside, Klitschko made his 16th straight defense with a fifth-round knockout of Alex Leapai, whom he dropped once in the first round and twice in the fifth.

Pulev represents Klitschko’s 26th title fight overall and the champion is 23-2 over that stretch thus far. His record of 21 defenses ranks second only to that of the 25 (all consecutive) by the legendary Joe Louis, having already surpassed the 20 by Larry Holmes.

Jim Lampley will review Saturday’s Klitschko-Pulev fight as well as last Saturday’s unanimous decision win by Sergey Kovalev over Bernard Hopkin when when his 30-minute show, “The Fight Game,” returns to HBO on Tuesday, according to a release.

Hopkins, who turns 50 in January, became the oldest man to unify titles when he floored Beibut Shumenov in the 11th round of a unanimous-decision win in April.

In March 2013, Hopkins, then 48, dethroned previously unbeaten IBF titlist Tavoris Cloud by unanimous decision to extend his own record as the oldest man to win a significant crown. Hopkins first set the record at the age of 46 by outpointing Jean Pascal for the WBC’s title in May 2011.