Aaron Pryor on Floyd Mayweather Jr.: ‘I would win in six’ 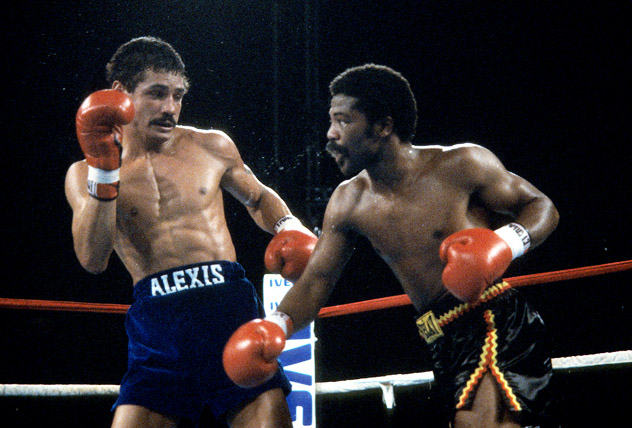 Aaron Pryor's epic first showdown with Alexis Arguello was The Ring's selection as Fight of the Decade (1980s).
14
Nov
by Lem Satterfield

WASHINGTON, D.C. — It was 32 years ago that Aaron Pryor won the first of his two classic battles against the late Alexis Arguello, whom he stopped in the 14th round on November 12, 1982.

On Thursday night, while in attendance at the 25th annual Fight For Children charity event at The Washington Hilton, Pryor was asked how he would do in a fight against RING No. 1-pound-for-pound fighter Floyd Mayweather Jr.

Known for pointing an ominous fist at his opponent prior to his fights, and for crashing a Sugar Ray Leonard press conference before challenging him to a fight at the podium, Pryor, who turned 59 last month, had no problem answering the question.

“Six rounds. I would win in six. I would go like this,” said Pryor, holding up six fingers for emphasis. “I would be going like this, like Muhammad Ali used to do. I would say that it would only go six rounds, and I would win it.”

A former IBF and WBA 140-pound champion who retired with a mark of 39-1 that included 35 KOs, Pryor was 12-0 with 10 stoppage victories when fighting in his native Cincinnati.

Pryor also said that he did not believe that Mayweather could run the gauntlet and remain undefeated against fighters such as himself, Arguello, Leonard or Thomas Hearns.

Of his historic victories over Arguello, Pryor was incredulous at his ability to emerge as the winner.

“When I think about the punches that Arguello hit me with, I don’t really know how I survived it,” said Pryor, who then glanced over at a nearby Mancini. “I mean, he knocked Boom Boom out, but I took that punch. I mean, he knocked a lot of people out.”