Carlos Cuadras to face Marvin Mabait on Thursday in D.C. 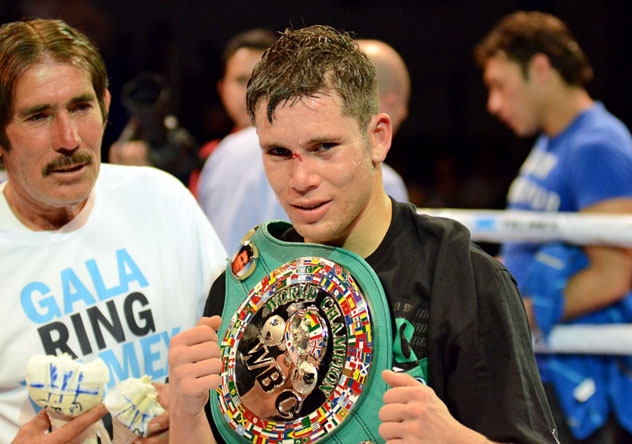 RING No. 2-rated junior bantamweight Carlos Cuadras will defend his WBC title against Marvin Mabait on Thursday night at The Washington Hilton in Washington, D.C., as part of 25th annual The Fight For Children charity event.

Mabait was a late replacement for former RING flyweight champion Sonny Boy Jaro, who was reportedly unable to leave the Philippines because of visa issues.

Mabait (19-2-2, 13 KOs) was knocked out in the third round by Marco Demecillo in April 2012, then reeled off three straight stoppage wins before most recently being stopped in the fifth round by Alejandro Hernandez, who would go on to unsuccessfully challenge Tomoki Kameda for the WBO bantamweight title on Nov. 1.

Cuadras (30-0-1, 24 KOs) won his belt by an eighth-round technical decision over RING No. 3-rated Srisaket Sor Rungvisai in Mexico last May, ending the Thai fighter’s 26-fight winning streak that had included 24 knockouts.

Cuadras was ahead, 77-74, 77-75, and, 78-73, on the cards when a nasty cut over his left eyebrow, caused by an accidental headbutt in the fourth round, worsened and led to referee Jay Nady halting the fight on the advice of a ringside doctor.

Cuadras’ last fight ended in a fourth-round technical draw with Jose Salgado, again caused by a clash of heads.

Mouton, 36, is coming off a recent losing streak comprised of setbacks against then-unbeaten fighters Brandon Gonzalez, Badou Jack and current WBC super middleweight titleholder Anthony Dirrell, all by decision, as well as Gilberto Ramirez Sanchez by 91-second knockout in February. Since then he has scored consecutive knockouts over journeymen in a pair of six-rounders.

The card will also include the return of former two-time world champion Ava Knight (12-2-3, 5 KOs), who will be fighting for the first time since her loss to WBC junior flyweight titleholder Ibeth Zamora Silva in October 2013.

Knight’s past victories include decisions over Kaliesha West and then-WBC flyweight titleholder Mariana Juarez, plus a second-round knockout of Arely Mucino for the IBF title in 2011. Her only other loss was by unanimous decision in 2009 while fighting for the WBC junior bantamweight title owned by Ana Maria Torres, who eventually logged 11 consecutive defenses. Knight will face Guadalupe Martinez (7-7, 3 KOs) of Mexico.