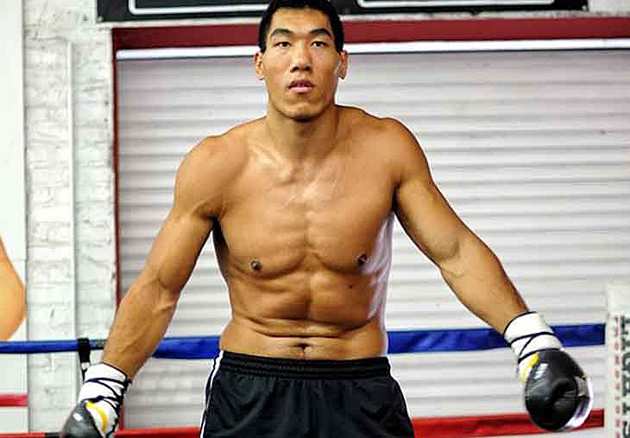 THE RING heavyweight champ, who stands 6-foot-6 to 6-4 for rival Pulev, will be in his 17th consecutive world title fight as well as his 26th title bout overall.

“I really like Klitschko,” said Dong, 26, who stands “almost, but not quite” 7-feet. “Klitschko is also very tall, like me. He’s also very powerful, and he fights well. That’s why I like him.”

Dong (1-0, 1 KO) will try to pin the third consecutive loss on Tommy Washington Jr. (3-6, 2 KOs) on the undercard of a “Golden Boy Live!” event to be televised on Fox Sports 1 and Fox Deportes.

“I’m really excited about my second fight. I’m looking forward to doing my best,” said Dong, who has a background in the practice of Sanshou, a form of Chinese kickboxing.

“I feel like my height is my advantage, and, of curse, I want to use that. But I’m also going to show all of the people not only that I’m tall, but also, that I have technique.”

“We’ve got a lot of work ahead of us, but as long as he keeps his head on right, then, there’s incentive,” said McGirt, who trains Dong out of the Powerhouse Gym. “If he keeps the focus that he has going now, then he’s going to be something, man. He’s just unbelievably strong and he’s so dag gone big. But for a guy his size, he’s quick.

“He tightens up every now and then, and he can be plodding. But I think he’s growing in confidence and we’re trying to keep him relaxed. We’re trying to get him to understand that when you’re relaxed, you’re at your best and your punches are more effective. We need him to be more technically sound, but I think that we’ll get there.”

Ramirez (12-0, 7 KOs), the 21-year-old great-nephew of the late former titleholder Genaro Hernandez, knocked out Ricardo Hernandez in the sixth round, also in September. Ramirez will fight Pedro Melo (9-6-2, 2 KOs), a 26-year-old who was stopped in the second round by Daniel Roman in August.

“Definitely, with every fight, you want to give it your best. Jo Jo or Diego can look like Mike Tyson that day, but I really don’t care about that. I just want to do my best and to always be ready. I just want to go out there and give the fans a good show,” said Ramirez.

“There are good nights and bad nights, and hopefully, I have a good night. But I’m not really trying to compete with Jo Jo or Diego. If we’re going to compete, just make the fight happen already, you know? I’m just going out there to look good, and then, hopefully, one day, we could fight each other.”

Diego De La Hoya (7-0, 5 KOs) is the 20-year-old cousin of Oscar De La Hoya and will appear at Fantasy Springs for the fifth time. De La Hoya meets Ali Gonzalez (6-3, 1 KO), a 27-year-old who was knocked out in the third round by Azat Hovhannisyan in September.

“I’m never nervous. I’m just anxious to get in there. But when I get the chance, I do study the other guys. I’ve caught a couple of their fights, and if we ever fought each other, that would have to be for a world title. That would be a huge fight in Los Angeles,” said Diego De La Hoya.

“It would be on the level of a Sugar Ray Leonard vs. Tommy Hearns or a Marvin Hagler vs. Roberto Duran. We all want to be world champions, but we have to get to that level, first. As far as the others, the rivalry really hasn’t set in yet because we’re all just starting out. Eventually, that’s going to happen.”

Below are the weights of the eight-fight card: