Manny Pacquiao hints his goal is to fight Floyd Mayweather Jr. before retiring 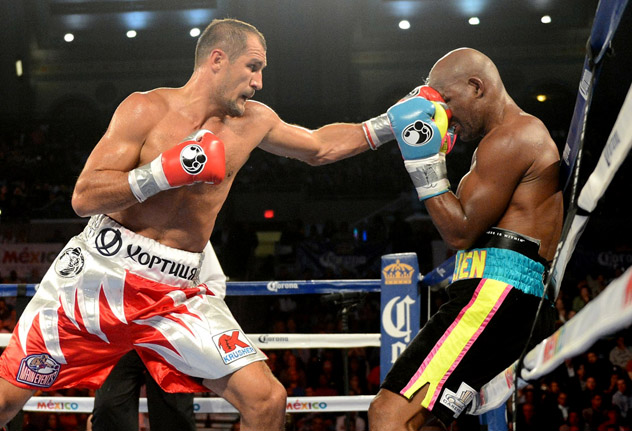 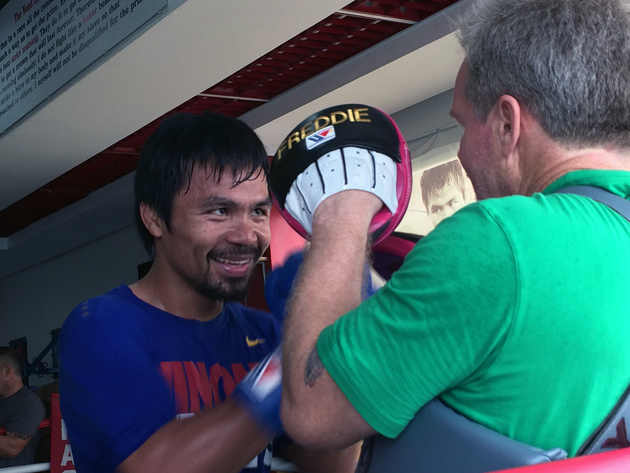 HBO has provided the third week of training blogs taken from interviews on Monday with Manny Pacquiao and Chris Algieri in advance of their Nov. 22 pay-per-view headliner in Macau, China.

Pacquiao (56-5-2, 38 knockouts) is 2-2 in his past four fights, including a loss by disputed split decision against Tim Bradley in June 2012 and another by sixth-round stoppage against Juan Manuel Marquez in December 2012. In his last fight, in April, Pacquiao, 35, regained the WBO welterweight title by a unanimous decision over Bradley.

In the following comments, Pacquiao, without mentioning Floyd Mayweather Jr. by name, obviously expresses his desire to fight Mayweather before retiring.

“I do have one specific goal and that’s to give the boxing fans the fight they have always asked for,” said Pacquiao. “I want that fight too. I believe good faith negotiations could produce that fight.”

Algieri (20-0, 8 KOs) took Ruslan Provodnikov’s WBO 140-pound belt by a split decision in June, his last fight. Algieri rose from three first-round knockdowns and fought with a right eye that was nearly closed shut in that fight. Algieri, from Long Island, New York, will challenge Pacquiao at a 144-pound catchweight in his first professional appearance on foreign soil.

Question for Pacquiao: What kind of goals do you still have for your career at age 35?

“As I have said before, boxing is my passion and public service is my calling. As I approach my title defense against Chris Algieri, I have found that my passion for boxing has increased. I do not feel old. I feel great and I find I am able to train as hard as I always have and I enjoy it.

“More importantly, I still enjoy boxing a lot. As long as my skills and my passion remain strong, I want to continue my boxing career. When I retire, I want it to be on my terms. I do not want to spend my retirement regretting that I walked away from boxing before I was ready. I do not want to come back and fight after I retire.

“My goals are to finish as a world champion, winning my remaining fights. Since the last [Juan Manuel] Marquez fight, I have approached every training camp and every opponent with 110 percent dedication. I would like to keep challenging myself in the opponents I will face in the future.

“I have not set a date or determined an age when I will retire. As long as I can keep fighting at the level I expect from myself, I will continue my boxing career. I do have one specific goal and that is to give the boxing fans the fight they have always asked for. I want that fight too.

“I believe good faith negotiations could produce that fight. But it is impossible to negotiate when you are the only one sitting at the table. Two fighters who WANT to fight each other have never been kept from fighting each other.”

ALGIERI ON PACQUIAO: ‘IT IS GOING TO BE MY JOB TO TEST HOW BAD HE ACTUALLY STILL WANTS THIS’

Questions for Algieri: What is it about your opponent’s style that makes it so difficult? Is your kickboxing knowledge an advantage? How is leg movements important when you have to fight against an opponent like Manny Pacquiao?

“It is not so much Manny’s style but his experience level that makes him such a dangerous opponent. He has had over 60 pro fights and been fighting for a very long time against the top fighters in the world. It is going to be my job to test how bad he actually still wants this.

“My kickboxing experience is an advantage, not so much my knowledge of the sport. It is another one-on-one sport, the training and preparation is similar and at the end of the day, you are in a fight. I have been fighting pretty much all my life.

“Yes, Manny has great footwork. He is in and out and side-to-side, so being able to control the space in the ring is very important when fighting with someone with a style like Manny. Being a ring general is going to be a big part in this fight as it is with all my fights.”