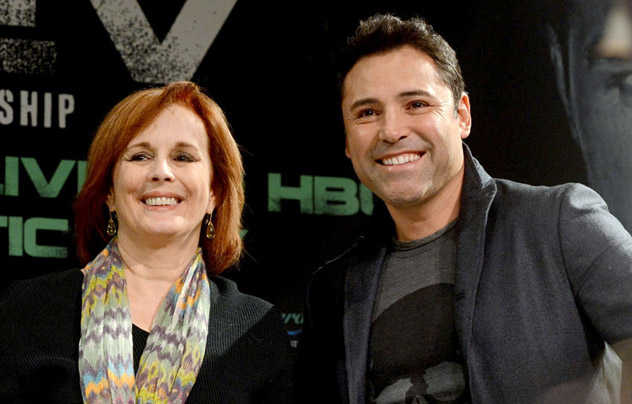 “I was looking for that one moment and for that one punch that he can land,” said De La Hoya, president of Golden Boy Promotions, who was stopped by a Hopkins left hand in a middleweight championship bout in 2004.

“Maybe it’s just because he’s 49 years old and I’m giving him all of the benefit of the doubt. I thought he’s going to land that perfect punch that shocks the whole world. I was playing that in my head, you know? I don’t know why.”

But the momentum-changing blow never arrived for Hopkins (55-7-2, 32 knockouts), who was dropped in the first round and heavily battered during the 12th by Kovalev (26-0-1, 23 KOs), whose unanimous decision victory added the IBF and WBA belts to the WBO title he already owned.

“To beat somebody like Hopkins, Kovalev did a tremendous job. He executed his game plan perfectly,” said De La Hoya.

In March 2013, Hopkins, then 48, dethroned previously unbeaten IBF titlist Tavoris Cloud by unanimous decision to extend his own record as the oldest man to win a significant crown. Hopkins first set the record at the age of 46 by outpointing Jean Pascal for the WBC’s title in May 2011.

Some of De La Hoya’s post-fight comments are as follows:

Oscar De La Hoya on his thoughts that Hopkins could pull it off:

“As a fighter, I was looking for that one moment and for that one punch that he can land. I did see Bernard Hopkins have difficulties but I still felt that he was in control and that something wanted to make me believe that he was still in control.

“But I was hearing, like, a Howard Cosell and then that voice of, you know, ‘Bernard Hopkins shocking the world with that one punch.’ But he faced ‘The Krusher.’ He faced a guy that is no joke. But, look, that’s Bernard Hopkins. He’ll tell you himself that it’s about facing the best and the toughest at 49 years old, win or lose or draw.

“He’s already a winner in my book. In the 12th round, my thoughts were still that Hopkins was still going to land that perfect punch and that he’s going to make him fall into that trap. I was thinking that until the last second, but Sergey Kovalev is a really good fighter. He’s a really good, solid fighter.”

On Kovalev’s first-round knockdown of Hopkins:

On the 12th-round punishment inflicted on Hopkins:

“[Hopkins] took some heavy shots; yes, he did. Bernard Hopkins is the type of fighter that will slip a few here and there. You’ll never catch Hopkins solid with a punch. He took a few solid punches but he seemed OK. We looked at each other inside the ring and he took a deep breath as if to say, ‘This guy was a tough guy,’ but he’ll be OK.”

“I was actually surprised. I was surprised because he would engage and he would throw his thunderous punches and then he would take a step back. He wasn’t waiting that extra second to get hit. He was taking a step back and that really presented a problem. That caused Hopkins to think twice about throwing his punches. He did a great job.

“There’s nothing you can say but good things about Kovalev. He did a tremendous job. I just believe that Kovalev was using his distance and timing Hopkins instead of just coming in and using his power; he was timing him.

“He knew when to get out just in time so that Hopkins couldn’t come back with his counter punches. I give a lot of credit to Kovalev to beat somebody like Hopkins and I don’t care how old he is. That doesn’t matter how old he is.

“Obviously, what it does to you as a fighter, facing a guy like Bernard Hopkins, a legend, it just takes you up to a whole new level So I’m sure that Kovalev is going to become a complete fighter now because of this experience. Look, Kovalev is a tremendous fighter who is going to do big things.”

On Hopkins and his future:

“At 49 years old, Bernard Hopkins is a living legend. He will forever solidify his career as one of the world’s best to ever lace up the gloves, and I overheard him say he’s not done yet. He just faced a guy who was a big, big puncher who had never been past eight rounds and a guy who was 49 years old was able to take him the distance.

“So obviously, I mean, Bernard Hopkins deserves and will always get all of the respect in the world from anybody who knows boxing or who has even seen boxing ever in their life. What Bernard Hopkins has accomplished and what he tried to accomplish tonight, obviously, is commendable.”

“He could do down and challenge, let’s say, a Julio Cesar Chavez Jr. or he could challenge a fighter like ‘Triple G,’ who could come up to 170 pounds or 168. Fighters like that, why not? I don’t know what he’ll do but one thing for sure that I know is that he’s not going to retire.”