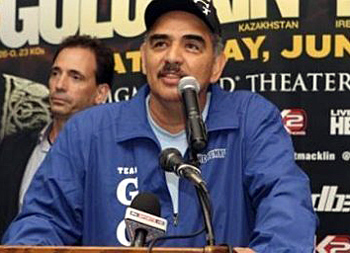 ATLANTIC CITY, N.J. – Trainer Abel Sanchez celebrated his 59th birthday with a couple of knockout victories by his fighters on Saturday at Boardwalk Hall.

Mohammedi (36-3, 22 knockouts) registered his third straight knockout against Demetrius Walker (7-8-1, 4 KOs), flooring him twice in the first round before referee Randy Neumann stopped it at the 2:16 mark.

Having last been in action for a seventh-round stoppage of Anatoliy Dudchenko in June, Mohammedi, 29, is 12-0 with 10 knockouts since being stopped in the second round by Dmitry Sukhotsky in Oct. 2011.

“Mohammedi and I have some mutual friends that put us together,” said Sanchez, “so that was our first fight together and we’re just started.”

Mohammedi is the mandatory challenger to Kovalev (26-0-1, 23 KOs), who added Hopkins’ 175-pound IBF and WBA belts to the WBO strap he already held.

“Abel Sanchez was the trainer tonight in my corner. This was my second fight on American soil. Tonight was just a warm-up. I’m ready for the unification,”said Mohammedi, just prior to Kovalev-Hopkins.

“I’m glad that I got to watch Hopkins-Kovalev tonight. I’ve been watching the fight tonight very closely and now I have my own game plan to become the next IBF light heavyweight champion of the world,” said Mohammedi, after the card.

Barrera (14-0, 9 KOs) dropped Rowland Bryant (18-5, 12 KOs) in the third of a fourth-round technical knockout with Neumann halting the one-sided match-up between the fourth and fifth rounds.

A native of Cuba now living in Miami, Barrera, 32, prepared for the fight in Big Bear Calif. alongside WBA middleweight titleholder Gennady Golovkin.

After fighting under Sanchez for the first time, Mohammedi is expected to soon join Golovkin and Barrera at Sanchez’s Summit facility in Big Bear to prepare for Kovalev.

“He’s coming out to see me and to visit me at our place up there next week,” said Sanchez. “Then we’ll see when we can get him into camp. He’s going to get better because things happen when they go to The Summit. They become different.”

Mohammedi is part of a talented stable of boxers under Sanchez, including Puerto Rican featherweight Jayson Velez, who will challenge Russian IBF titleholder Evgeny Gradovich on Nov. 29.

Sanchez also has 21-year-old Russian cruiserweight Murat Gassiev, a 6-foot-3 prospect who has stopped his past four opponents. In his last fight on Halloween, Gassiev scored a first-round knockout of Engin Karakaplan.

“[Gassiev] just turned 21 on Oct. 12 and I’m telling you, he’s the next Golovkin. He’s a bad man. He comes to camp next week and I’ve had him once in camp and we took him to Russia and he knocked out Krakaplan in 99 seconds,” said Sanchez.

“Now he comes to camp and he’ll fight again in about eight weeks. He’s about 210 pounds but by the time he cleans out the cruiserweight division in a couple of years, he’ll be fighting as a heavyweight.”