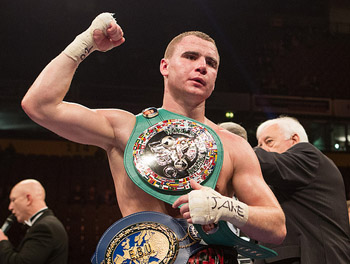 Sergey Rabchenko will try to put a frustrating year behind him when he fights Anthony Mundine on Wednesday in Melbourne, Australia.

Because of botched visas and conflicts with the European Boxing Union (EBU) it will be the first time he has fought in 2014. However, it’s not something that he considers a problem.

“No, because I have kept training regularly,” Rabchenko (25-0, 18 knockouts) told RingTV.com through his manager, Philippe Fondu. “And the opportunity to box Anthony Mundine, in Australia, for the defense of my WBC Silver title has kept me focused.”

He hopes to become only the second Belarusian-born fighter to capture a world title, following former heavyweight titlist Sergei Liakhovich.

“Sergei Liakhovich has an impressive career in professional boxing, and furthermore in the heavyweight division,” said the 28-year old Rabchenko. “He won a world title against Lamon Brewster in April 2006, he lost it in his first defense and never won it back after.

“I certainly intend to win the WBC world title and keep defending it successfully several times before retiring from the sport.”

One of the members of his management team, respected agent/manager Philippe Fondu (who has also worked with many top fighters from the former Eastern bloc, including Alexander Gurov and Roman Karmazin) speaks glowingly of his fighter’s ability: “Sergey has an immense natural talent, can punch and has a good chin. He is dedicated and ambitious but in the same time, he is respectful and I truly believe he’ll go all the way.”

Rabchenko features prominently in the junior middleweight rankings of all four major sanctioning bodies: WBC (No. 2), WBA (No. 5), IBF (No. 3) and WBO (No. 14).

Here’s what he said when RingTV.com spoke with him on a variety of subjects, including his bout with Anthony Mundine, working with former world champion-turned-promoter Ricky Hatton and his life away from boxing.

Anson Wainwright – What are your thoughts on fighting Mundine?

Sergey Rabchenko – I am totally confident I’ll win this contest, no doubt in my mind.

AW – I’m sure you’ll have watched Mundine in action before – what do you see in terms of strengths and weaknesses?

SR – I have the utmost respect for Anthony Mundine and for what he achieved, but it’s time now for younger people to take over.

AW – The fight takes place in Australia. Is that a concern for you fighting in his homeland?

SR – Not at all, I’ve almost always performed away from home anyway.

AW – Mundine lost his last fight to Joshua Clottey, so he’ll be keen to get the win to put himself back in the picture on the world scene. The fight is also important to you. Do you see it as a fight that can propel you into a big fight with one of the top names at junior middleweight?

SR – Anthony Mundine is a name and after I beat him, hopefully, this will open me the doors for fights with the elite of the junior middleweight division.

AW – You’re training in the U.K. – tell us about your training camp.

SR – I started my physical preparation in Valence (France), with Nicolas Riffard and Alexandre Komurian, and then in Hyde (England), at the Ricky Hatton gym, not leaving any stone unturned.

I’ll finish my preparation for the last four weeks prior to the contest, on the sunshine coast, north of Brisbane where everything is planned regarding accommodation, training and sparring on-site.

I’ve had already excellent sparring in the U.K., and will have several good ones with the likes of former Olympian and undefeated Cameron Hammond, as well as Paddy Murphy and Jeff Horn in Australia.

AW – You’re part of Ricky Hatton’s promotional stable. How does having him as part of your team help?

SR – Ricky is a legend all over the world, and particularly in Australia, as he defeated Kostya Tszyu. I’m sure it will help me enormously to have him with me Down Under.

Furthermore, the guidance from Ricky Hatton is what helped me to reach the level I did in professional boxing, so this means everything.

AW – The flight to Australia from the U.K. is very long, and the time difference is many hours. How long before the bout do you intend to arrive to acclimatize?

SR – My manager Philippe Fondu has secured an excellent agreement in this respect. I’ll be flying to Australia, with Philippe and my physical conditioner Alexandre Komurian, in October, which is three and a half weeks before the contest. We’ll be staying in Brisbane, with all facilities at hand (gymnasium, sparring partners, nice accommodation) up to November 6th. Ricky will arrive on-site on October 29th with Zhanat Zhakiyanov, who also boxes on the card.

AW – By fight night it will be a year since you last fought. Why has this been?

SR – There has been a terrible mess-up from an Italian promoter and also from the EBU, and I consider that the EBU has certainly not showed me any respect!

Indeed, I had trained very hard and was perfectly ready to defend my European title against Emanuele Della Rosa …

Beside many urgent requests from both Valery Kaplia and Philippe Fondu, the Italian promoter never provided the right document for the Schengen visa application, which is his duty, and as a consequence, I didn’t get the visa issued by the Italian consulate. [Note: The Schengen Area is a coalition of 26 European countries that do not require visas to travel between them. Belarus is not a member.]

It was a real shock when the EBU threatened to strip and punish me if I didn’t relinquish the title, but obviously this was done so as to allow the Italian promoter to select a Spanish boxer, Isaac Real, who has a record of 9-0-1 and was rated at the bottom of the classification, to face Della Rosa.

Incredibly, the Spaniard dropped Della Rosa three times in the second round and stopped him in the eighth to win the European title, in what is probably the upset of the year (Della Rosa was rated No. 3 by the WBC at the time).

To add to the infamy, the EBU decided to nominate Cedric Vitu (whom Rabchenko defeated in 2012) as the EBU official challenger of the new champion, disregarding the fact they had forced me to relinquish the title beside no fault of my own or my team!

It became a further mess as they allowed Isaac Real to defend his title against Jack Culcay, and Real got beaten. …

I must say that I am extremely disappointed about this behavior of the EBU, considering that I won the EBU title against Ryan Rhodes, and then defended it successfully three times afterward, never losing it in the ring.

AW – What are your thoughts on the junior middleweight division?

SR – This is one of the best divisions in boxing, and I would love to challenge either Saul Alvarez or Floyd Mayweather of course.

SR – First defeating Anthony Mundine on November 12th in Melbourne, and then becoming a world champion.

AW – In closing do you have a message for Mundine?

SR – I’m coming to you and will go back home with my WBC belt.