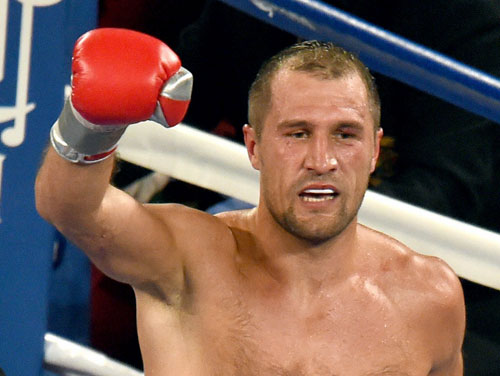 Sergey Kovalev: Those who predicted that Kovalev would defeat Hopkins knew he was no Beibut Shumenov, Karo Murat or Tavoris Cloud, the last three fighters beaten by Hopkins. And the Russian proved it by dominated boxing’s grand old man en route to winning a shutout decision, the worst defeat in Hopkins’ 26-year career. Few could’ve foreseen how he would win, though: He outboxed a boxing wizard. Kovalev drew from his vast amateur background and 26 pro fights to pick apart Hopkins, rather than overwhelm him. He landed hard punches but was never reckless, which gave the slower, weaker Hopkins little chance of doing damage. Hopkins landed only 5.4 punches per round. Kovalev put Hopkins down with a short right in the first round and pounded him mercilessly in 12th. Make no mistake, though: The victory was more the product of cunning than punching power. Kovalev’s only failure was his inability to become the first to stop Hopkins, which would’ve made a stronger statement in his bid to become a marquee attraction. That was as much the result of Hopkins’ defensive skills and solid chin as any deficiency on Kovalev’s part, though. In the end, Kovalev did what he came to do: He dominated a legend.

Bernard Hopkins: The last thing Hopkins is is a loser. I’m not sure I’ve ever written this about a fighter but I was proud of him before, during and after the fight. One, he accepted an extremely difficult challenge. That alone is worthy of admiration. Two, he lost badly to a far-better fighter but fought bravely and with great sportsmanship. Even though he could accomplish very little, he never complained. He never held. He never fought dirty. He never looked for a way out. He tried to win the fight fairly and squarely until the bitter end, taking a great deal of punishment in the final round as a result. And three, during HBO’s post-fight interview, he gave Kovalev all the credit he deserved and made absolutely no excuses. When asked to explain what happened, he said simply: “The better man was Kovalev.” Every boxer who loses a fight could learn from that statement. I don’t think Hopkins knows what his immediate future holds. If he fights again, don’t be shocked if he wins. He just needs an opponent better suited to his current skills. And if he decides to call it quits, well, we’ve been privileged to witness one of the most-remarkable careers of this or any era. I don’t think he would want to go out on a shutout loss. At the same time, he will have ended his career with undeniable class. There are worse things.

Sadam Ali: Ali, a 2008 U.S. Olympian, was impressive on paper. Strong amateur background, meaning he is well schooled. Good athleticism. And success through the first 20 fights of his professional career. However, those who have followed his development couldn’t be certain of his potential because he had never faced an elite opponent as a pro. Now we have a pretty good idea. Ali not only beat the very capable veteran Luis Abregu, he beat him up before finally scoring a ninth-round knockout in a scheduled 10-round welterweight bout on the Kovalev-Hopkins card. Ali was every bit as quick and skillful as billed, boxing circles around the hard-punching Argentine from the opening bell. Then the boxing lesson turned into a beat down, as Abregu (36-2, 29 KOs) went down in Round 6 and never had much of a chance thereafter. Ali finished the job in the ninth by putting Abregu down with a combination from which he couldn’t recover. I don’t want to say that Ali (21-0, 13 KOs) has instantly become a major player at 147 pounds. After all, he has exactly one victory over a true contender. That was a very strong statement, though. He clearly took a huge step in his young career.

Tomasz Adamek (49-4, 29 KOs) might be finished after losing his second consecutive fight, this time to countryman Artur Szpilka (17-1, 12 KOs) by a unanimous 10-round decision on Saturday in Poland. Adamek is 37 and has been in many hard fights, which might make this the time to walk away. He should be proud of what he accomplished. He won world titles at light heavyweight and cruiserweight and then became a solid heavyweight, one who was always limited by his size. When I think of Adamek, I think of a tough, skillful, supremely conditioned warrior, traits that add up to success. I always admired Adamek. ÔÇª The career of Grzegorz Proksa (29-4, 21 KOs) probably isn’t over at 29 but the once-promising middleweight is at a crossroads. He was stopped in seven rounds by Maciej Sulecki (19-0, 4 KOs) on the Adamek-Szpilka card, Proksa’s third defeat in four fights. ÔÇª

Vyacheslav Glazkov (19-0-1, 12 KOs) remained in the heavyweight mix with a seventh-round knockout of 40-year-old warhorse Darnell Wilson (25-18-3, 21 KOs) on the Kovalev-Hopkins card. Glazkov is rated No. 7 by THE RING. ÔÇª Felix Sturm (39-4-3, 18 KOs) and Robert Stieglitz (47-4-1, 27 KOs) fought to a draw in a 12-round super middleweight fight on Saturday in Germany. The fight was Sturm’s first at super middleweight, although they fought at a catch weight of 166.45 pounds. I’m not sure where that leaves Sturm, a 37-year-old who always seems to be on the verge fading away. A draw with Stieglitz isn’t a disaster but it wasn’t the statement Sturm wanted to make. The same can be said of Stieglitz, who is winless in consecutive fights. ÔÇª Damien Hooper (9-1, 8 KOs) of Australia was a top light heavyweight prospect until the right fist of Rob Powdrill met Hooper’s head and knocked him out cold on Saturday near Brisbane. The fight lasted 21 seconds. And if that weren’t bad enough, Powdrill (4-1, 1 KO) was a late replacement known more for his experience in martial arts than boxing. Ouch.