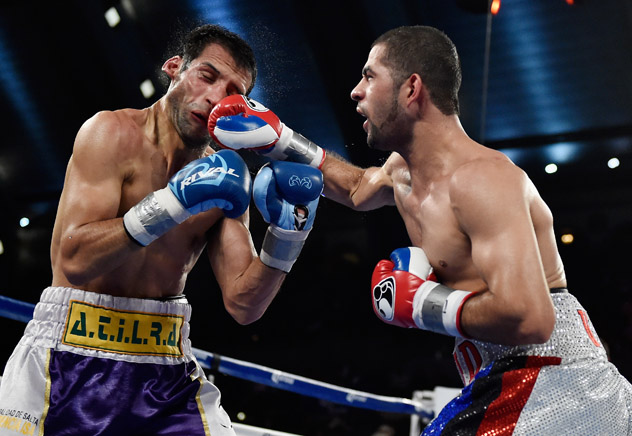 Sadam Ali scored the biggest victory of his career, stopping Luis Abregu in the ninth round of a welterweight fight on the Bernard Hopkins-Sergey Kovalev card Saturday in Atlantic City.

Ali, a 2008 U.S. Olympian, showed his amateur pedigree by thoroughly outboxing his more experienced opponent for most of the fight. Ali punched and moved throughout, leaving Abregu frustrated.

That dominance eventually evolved into a beatdown, though.

Ali put Abregu down with a right counter in the sixth round, which was the beginning of the end. After that, he landed more and more hard punches — mostly counters — as Abregu desperately attacked.

Finally, in the ninth, Ali put a damaged Abregu down with a combination midway through the round. He got up but Ali continued to pound him, forcing the referee to stop the scheduled 10-round fight at 1:54.

Ali (21-0, 13 knockouts) had never faced a fighter of Abregu’s caliber. That means he passed a significant test. And he did it in impressive fashion.