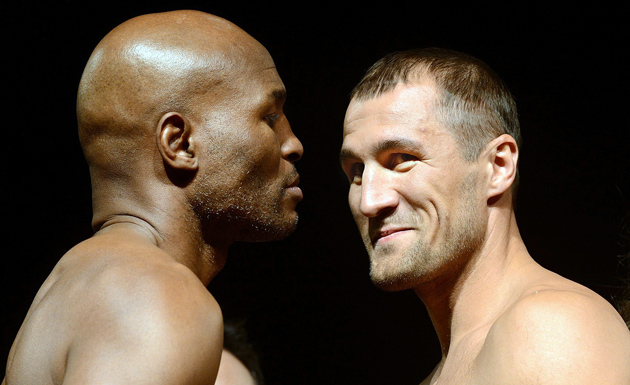 Hopkins and Kovalev were 173.5 and 174.5 on Friday. Hopkins (55-6-2, 32 knockouts) is putting his IBF and WBA belts up against the WBO title held by Kovalev (25-0-1, 23 KOs). The second day weigh-in is mandated by the IBF, which will not allow boxers fighting for their titles to weigh more than 10 pounds over the contracted limit. In this instance, Kovalev is exactly 10 pounds over the division limit of 175.

“No problem,” said Daryl Peoples, president of the IBF. “The 10 pound requirement refers to 10 pounds over the weight limit for the division…185 is permissible because 175 is the light heavyweight limit.”

During a Thursday press conference at Caesars Hotel, Hopkins told Kovalev that he “looked as dry as a raisin.”

“It’s dehydration. So we’re going to push him the first couple of rounds, because he’s only gone more than about four rounds a few times,” said Hopkins of Kovalev, who has gone eight rounds only once in his pro career. “I want that in his mind that I noticed that. So he’s going to have to deal with that for the next 48 hours.”

Hopkins, who turns 50 in January, has twice become the oldest man to earn a major title, as well as the eldest to unify. He is trying to eclipse the third record against Kovalev, 31.

The trainer of WBA middleweight titleholder Gennady Golovkin (31-0, 28 KOs), Abel Sanchez, will be ringside for Hopkins-Kovalev since his light heavyweight prospect, Sullivan Barrera (13-0, 8 KOs), is fighting Rowland Bryant (18-4, 12 KOs) on the card.

Along with Kovalev, Barrera, 32, is part of a deep pool of 175-pounders promoted by Main Events, and is looking to distinguish himself against Bryant, 35.

“I’m happy for the opportunity. I understand the importance of being on this undercard, and it’s great to be a part of it,” said Barrera. “It’s awesome to be on an undercard where the two best in the division are going to be duking it out.”

A native of Cuba now living in Miami, Barrera said that he gained plenty of experience and perspective while preparing for the fight alongside Golovkin in Big Bear, Calif.

Should Hopkins get beyond Kovalev, he has expressed interest facing Golovkin, whose second-round knockout of Marco Antonio Rubio last month represented his 12th title defense and his 18th consecutive stoppage win.

“Training with Gennady Golovkin, who is one of the best guys in the sport, I’m learning so much every time. I have not sparred with him, but I’ve actually learned a lot from Gennady’s work ethic and from his level of discipline inside and outside of the gym. He’s a very hard-working man who very dedicated to his craft,” said Barrera.

“That inspires me and give me the motivation to stay in the gym every day and to basically mimic and do the same things for my career. There’s not really much pressure. I’m proud, I’m happy and I feel blessed to be part of such a great team,” said Barrera. “I basically want to put on a good show to represent the great team, as I’ve already stated. It’s something that I really look forward to for my career.”

While Barrera’s sixth round knockout of Eric Watkins in September represented his second straight stoppage win, Rowland has gone 4-4 with three knockouts in his past eight fights. During that time, Bryant was knocked out in the eighth round by Yunieski Gonzalez in March 2013. In his last fight in August, Bryant lost by unanimous decision to Pawel Glazewski.

“I’ve done all of the work necessary in the gym, and I’m a firm believer that the knockout comes on its own. Hopefully, everybody likes my performance,” said Barrera.

“My team and I are working hard, and I’m being patient as I put in the hard work and dedication necessary to improve myself. Hopefully, by the end of next year, I’ll be able to have the opportunity to fight for a title. So I can’t wait to show the fans what I can do.”

Welterweight Yoshihiro Kamegai (24-2-1, 21 KOs), who was last in action for a unanimous decision loss to former titleholder Robert Guerrero in a slugfest in June, will face an opponent to be determined on Dec. 13 at the MGM Grand. Kamegai will be on the undercard of the welterweight bout between ex-beltholders Devon Alexander and Amir Khan, according to Golden Boy Vice President and matchmaker Eric Gomez.

Kamegai, who turns 32 on Nov. 12, is 2-2 with two knockouts in his past four fights. Kamagai’s other loss was by unanimous decision to Johan Perez in June 2013.

Khan-Alexander represents the Showtime-televised portion of the card that will also boast welterweight Keith Thurman against Leonard Bundu in a clash of unbeatens, and undefeated junior middleweights Jermell Charlo and WBO titleholder Demetrius Andrade.

Also on the card will be three-division title winner Abner Mares in a featherweight bout, and former welterweight beltholder Victor Ortiz. Mares and Ortiz will fight opponents to be determined.

Featherweights Rocky Juarez (30-10-1, 21 KOs) of Houston and Robinson Castellanos (20-10, 13 KOs) of Mexico could fight in January on a Golden Boy Live! card on Fox Sports 1 and Fox Deportes, according to Gomez.

An Olympic silver medalist in 2000 and a title challenger, Juarez, 34, ended a nearly two-year ring absence with a unanimous decision over Rene Alvarado in May.

Castellanos, 32, scored a shocking fifth-round knockout over previously unbeaten Ronny Rios last month, dropping Rios in the second round. Prior to Rios, Castellanos had suffered a ninth round stoppage loss to Alvarado in April that ended his run of 11 consecutive wins, seven by way of knockout.

In his last fight in August, Linares stopped Ira Terry in the second round for his sixth straight victory and his fourth knockout during that run. In his previous fight in March, Linares, 29, out-boxed Nihito Arakawa for a unanimous decision.

Linares won the WBC’s vacant featherweight belt with a 10th-round knockout of Oscar Larios in July 2007 and won three straight bouts before falling by first-round knockout against Juan Carlos Salgado in October 2009.

The loss to Salgado dethroned Linares as the WBA’s 130-pound titleholder. The Japan-based Venezuelan earned the belt with a fifth-round stoppage of Whyber Garcia in November 2008, and defended it with an eighth-round knockout of Josafat Perez in June 2009.

Linares bounced back as a lightweight with four consecutive wins before being knocked out twice in a row by Antonio DeMarco and Sergio Thompson in 11 and two rounds in October 2011 and March 2012.

Prieto, 27, is 8-0-2 with seven knockouts in his past 10 fights, and is coming off consecutive draws with Ivan Cano in May and September. Prieto last suffered defeat in April 2012 by split decision to Robert Ortiz.