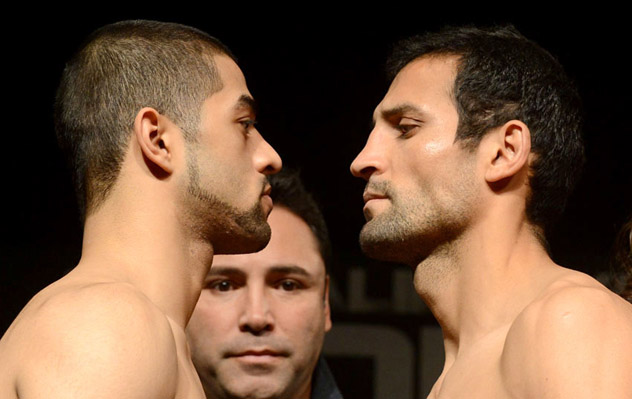 Ali, 26, floored Abregu once each in the sixth and final rounds, having registered knockouts in six of his past eight fights. Ali was coming off a split-decision victory over Jeremy Bryan, whom he floored in the ninth round in August.

Abregu, 30, had won seven straight fights, six by knockout, since being unanimously decisioned by two-division titlist Tim Bradley in 2010. Among Abregu’s victories during his run was a seventh-round knockout against previously unbeaten prospect Thomas Dulorme in 2012.

In April, Abregu ended a nearly one-year ring absence against the previously unbeaten Jean Carlos Prada, rising from a seventh-round knockdown to score a knockout in the eighth before his countrymen in Argentina.

Abregu had been out of action action since April of last year due to an injured right hand, but impressively ended a streak of three straight knockout victories by Prada. Prior to Prada, Abregu scored a unanimous decision over Antonin Decarie, who entered their fight with a mark of 27-1.

Fighters are in the ring, being introduced by the one and only Michael Buffer!!!!

SADAM ALI WINS BY NINTH-ROUND TECHNICAL KNOCKOUT AT THE 1:59 MARK!!!

Round 1: Fighters at ring center. Ali keeping his distance, Abregu stalking. Ali jabs three times, all short. Ali jabs and lands a right. Abregu fires a right to the body. Jab, jab, right by Ali. Decent pace, in and out movement so far by Ali. Crowd’s booing. Abregu reaches and misses with a right and a left. Right by Ali. Jab by Ali. Right to the head and short one to the chest by Ali. Ali, 10-9

Round 2: Ali maintaining distance, lands a grazing right after a short jab. Another jab lands for Ali. Right to the body by Agreg, but all the punches are light ones. Grazing left uppercut from Ali. Right by Ali. Left-right by Ali, both grazing. Abregu has to get busy. Left by Agregu after an Ali miss. Nothing significant landing by either fighter. Right to the body by Abregu, left by Ali. They swap lefts. Agrebu lands a hard left. Ali, 10-9, Ali 20-18.

Round 6: Abregu lands an early right hand. Right by Abregu and left by Ali. Jab and right by Ali. Crowd chanting “Ali!” Double-jab by Ali. Right to the body by Abregu. Ali doing a great job keeping his back off the ropes. ABREGU DOWN FROM A RIGHT HAND!!!! He rises. Abregu appears to still be hurt, Ali’s moving in. Jab, jab, right by Ali with Abregu in retreat. Ali, 10-8; Ali, 58-55.

Round 7: Ali more confident, jabbing to set iup the right. ABREGU’S WOBBGLED AGAN AND IN TROUBLE, GETTING NAILED WITH RIGHTS AND LEFTS. Abregu holds to escape trouble. Right hand and left hook by Ali shake Abergu again. Crowd is behind him. Abregu lands a decent left and a right, the latter of which pops Ali’s head backward. Decent jab by Abregu, but Ali still is in control. Great patience. Jab by Ali, who remains elusive. Left hook and a right hand by Ali. Ali, 10-9; Ali, 68-64.

Round 8: Ali continues to box from a distance, lands a flush left hook and a right hand. Another left hook against an oncoming Abregu. Jab lands for Abregu. Right for Abregu, but he gets nailed again with the hook. Ali back to jabbing and avoiding Abregu’s punches with good head movement on the ropes. Solid jab by Ali. Abregu is having a tough time finding Ali’s head. Three right hands land for Abregu, but he takes a couple of lefts in return. Ali, 10-9; Ali, 78-73.

Round 9: Abregu has Ali stunned in a corner, but gets wobbled, yet again, by a right hand followed by a left. Another hook by Ali, who needs to avoid getting into a war. Right and left and right hurt Abregu again. HARD RIGHT HAND AND A LEFT HAVE ABREGU DOWN AGAIN ON HIS KNEES!!!! He rises. ALI CORNERS HIM AND DRIVES A LEFT, A RIGHT AND A LEFT HOME, FORCING REFEREE HARVEY DOCK TO STEP IN AND STOP THE FIGHT.

SADAM ALI WINS BY NINTH ROUND TECHNICAL KNOCKOUT AT THE 1:59 MARK!!!