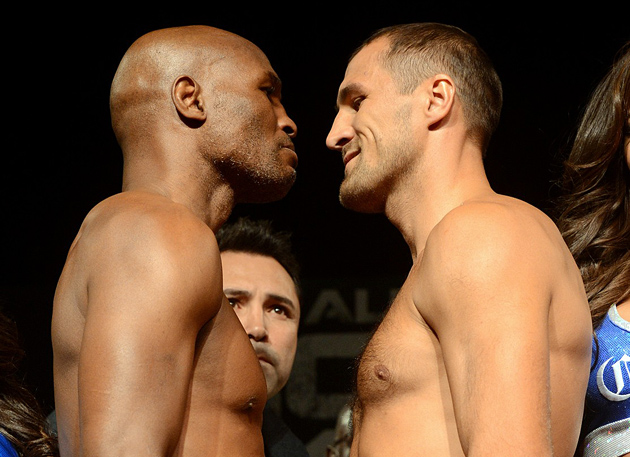 ATLANTIC CITY, N.J. — Bernard Hopkins weighed in at 173.5 pounds on Friday for his light heavyweight title unification bout against Sergey Kovalev at Boardwalk Hall. Kovalev weighed in at 174.5 in advance of Saturday’s HBO-televised fight.

Hopkins (55-6-2, 32 knockouts) is putting his IBF and WBA belts on the line against the WBO title held by Kovalev.

During the staredown, Hopkins looked directly at Kovalev, who smiled and then avoided eye contact by bobbing his head from side to side. Eventually, Kovalev did lock eyes with Hopkins, swirling his left hand in a circular manner as an indication that he thinks that the swift-talking Hopkins is nuts.

Hopkins, who turns 50 in January, has twice become the oldest man to earn a major title, as well as the eldest to unify. He is trying to eclipse the third record against Kovalev (25-0-1, 23 KOs), 31.

For the welterweight co-feature, Luis Carlos Abregu and Sadam Ali weighed 146 and 146.5 in advance of their bout.

Abregu, 30, ended a nearly one-year ring absence with an eighth-round TKO of previously unbeaten Jean Carlos Prada in April, rising from a seventh-round knockdown to do so before his hometown fans in Mexico.

Having been out of action action since April 27 of last year because of a right hand injury, Abregu, nevertheless, was impressive against Prada, who had scored knockouts in three of his previous four bouts.

Abregu (36-1, 29 KOs) has won seven straight fights, six inside the distance, since falling by unanimous decision to Tim Bradley in July 2010. Among Abregu’s victories during his run was a seventh-round knockout against previously unbeaten prospect Thomas Dulorme in October 2012.

Prior to Prada, Abregu scored a unanimous decision over Antonin Decarie, who entered their fight with a mark of 27-1.

Ali (20-0, 12 KOs) , 26, is coming off last month’s split-decision victory over Jeremy Bryan, whom he floored in the ninth round at Barclays Center in Brooklyn, N.Y.

Below are the weights for the remaining bouts on the nine-fight card.