Oscar De La Hoya: ‘The Cold War is over’ 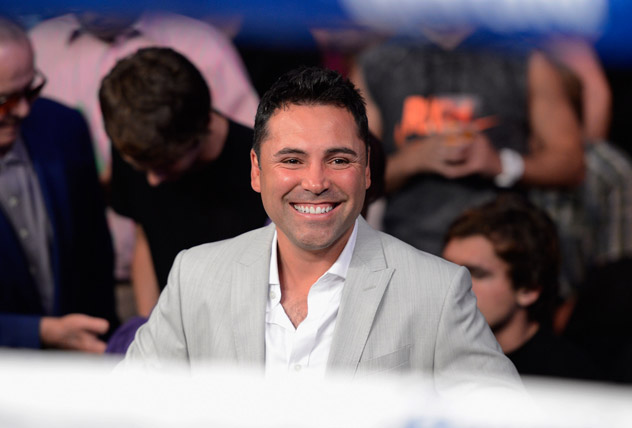 The pronouncement was made during the final press conference at Caesars Hotel in advance of Saturday’s light heavyweight title unification bout between Bernard Hopkins and Sergey Kovalev, which will be televised on HBO from Boardwalk Hall.

“This is just an indication,” said De La Hoya. “We at Golden Boy Promotions are willing to work with any promoter out there in the world just to make the fights that the fans deserve.”

With De La Hoya being president of Golden Boy Promotions, and Moretti, the vice president of boxing operations at Top Rank, the fact they were so cordial, let alone, in the same room and promoting together represents a breakthrough in what had been a standoff between the two promotional giants.

De La Hoya began his quest to end the Cold War back in May, when he visited longtime rival Bob Arum, CEO of Top Rank. Arum declared his relationship with De La Hoya a “totally repaired” after their meeting, which led to the June resignation of Golden Boy CEO Richard Schaefer, with whom Arum was a bitter rival.

“Everything changes, and this was a change for the better. It’s really not as big a deal as people make it out to be,” said Moretti, who has had frequent conversations with Golden Boy Vice President and matchmaker Eric Gomez. “It makes it easier doing your job and trying to make potential matchups. That’s one of the things that was blocked in the past and which isn’t there anymore.”

The union produced Saturday’s welterweight undercard bout between Luis Carlos Abregu, who is handled by Top Rank, and Sadam Ali, who is aligned with Golden Boy.

“This was a very easy fight to make,” said Moretti. “It’s a tough fight for both guys, so we’ll find out, but it’s not a bad decision on anybody’s part.”

“In addition to representing myself, I always feel like I’m representing Golden Boy, too,” said Ali, 26. “It’s great to bring everyone together. I think we should all work together. It’s for the boxing fans and everybody that’s watching.”

There is another collaboration happening on Dec. 13, when junior welterweight Jose Benavidez Jr. of Top Rank meets Mauricio Herrera of Golden Boy in support of the Tim Bradley-Diego Chaves at the Cosmopolitan in Las Vegas.

“That’s more evidence that what Oscar said is true, and that we look forward to making bigger and better fights,” said Moretti. “We’re taking a step in a positive direction. We’re stepping forward, not backwards.”

That was among the reasons Hopkins benefited from sparring with Shabranskyy, who has stopped five of his past six opponents heading into Saturday’s fight with Emil Gomez (11-8-1, 8 KOs) on the Hopkins-Kovalev card.

“What I really liked the most was that when Bernard tried to do s–t to him, he would try to do it right back to Bernard. That’s what I like to see in a young fighter. He can do different things, which I expect Kovalev to do, also. We don’t know how hard Kovalev punches until we face him.”