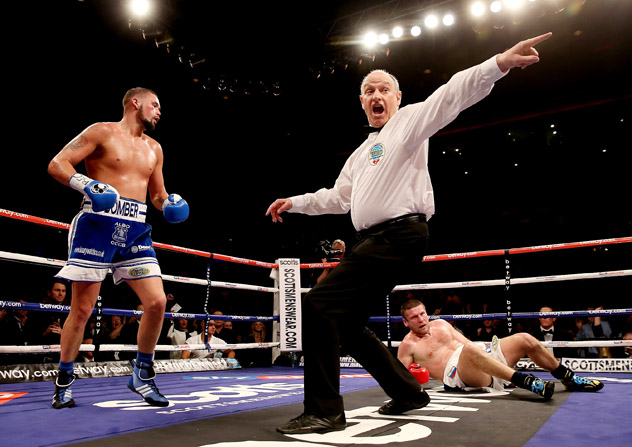 If cruiserweight Tony Bellew lands “at any time” during his Nov. 22 rematch with Nathan Cleverly, “it will be all over,” said Bellew’s trainer, Dave Coldwell.

Bellew (22-2-1, 14 knockouts) will face Cleverly (28-1, 14 KOs) at the Echo Arena in Bellew’s hometown of Liverpool, England, site of his majority decision to then-WBO light heavyweight titleholder Cleverly in October 2011.

“Tony is showing incredible punching power and Nathan has already said on Sky Sports that he expects to take a shot at some point. If Tony lands at any time in the fight, then I’m convinced it will be all over.”

Bellew, 31, is 6-1-1 with four knockouts since losing to Cleverly and has scored knockouts over Valery Brudov in the 12th round in March and Julio Cesar Dos Santos in the fifth round in July since rising into the cruiserweight division.

“Tony is a totally different proposition at cruiserweight and Cleverly will find that out on Nov. 22,” said Coldwell of Bellew, who last suffered defeat by sixth-round stoppage to RING light heavyweight champion Adonis Stevenson last November.

“I expect the pair to make a fast start and try to gain an advantage early but all the attributes needed in a battle like this are with my man. He’s absolutely smashing every single training session and I know what he’s capable of.”

Since entering the cruiserweight division, Cleverly, 27, has scored knockout victories over Shawn Corbin in the second round and Alejandro Emilio Valori in the fourth in May and July, respectively. Those triumphs helped Cleverly bounce back after being dethroned as WBO 175-pound titleholder in a fourth-round stoppage loss to Sergey Kovalev in August 2013.

“This fight means everything to Tony, so it means everything to me and I’m not letting my focus get distracted from anything. Tony and I have been friends for a long, long time, longer than what people think, and we’ve had conversations in the past about long-term ambitions and targets,” said Coldwell.

“The likes of Marco Huck and Denis Lebedev are the names leading the way at cruiserweight, so it’s only natural that they’ll appear on our radar afterward. But for now, it’s all about Nathan Cleverly. A career in this sport can be a very short one, so it’s essential you take every opportunity presented to you. After Nov. 22, I’m very confident that there’ll be a ton of opportunities for Tony and that victory against Cleverly will only be the beginning for him.”

OTAKE ‘GOING FOR THE KNOCKOUT’ VS. QUIGG’

Otake is vowing to take down Quigg (29-0-2, 22 KOs), 26, who is 8-0-2 with eight knockouts over the course of his last 10 fights and was last in action for a third-round stoppage of Stephane Jamoye in September.

“I’m not going to England just for the memories. I’m ready to give everything to bring home the belt. Quigg looks like he is strong and hits hard,” said Otake, 33. “He’s also good at controlling the distance. He has many good qualities but in boxing, you never know what will happen until you get in the ring.”

Otake will be making his debut on English soil, having fought exclusively in Japan.

“Since we’ll be in enemy territory,” said Otake, “it will be tough to win on points. So I’m going for the knockout.”

Nathan Cleverly-Tony Bellew II on AWE in the U.S.