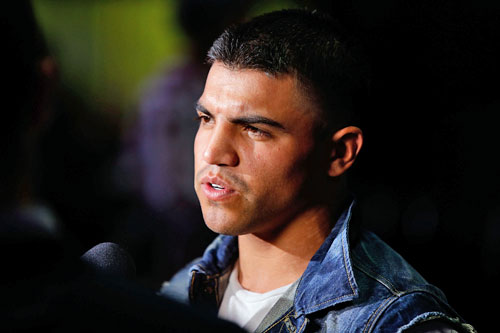 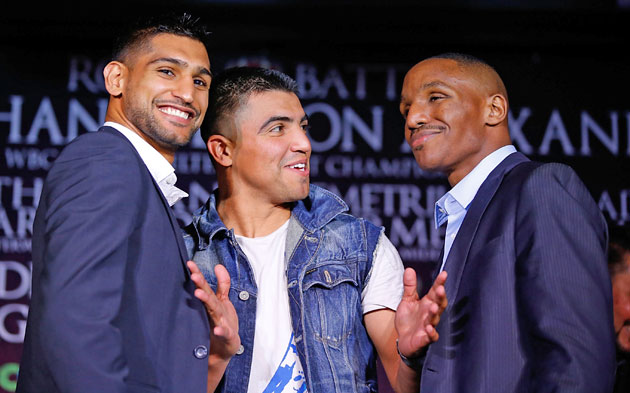 Victor Ortiz breaks the fighters who will headline the card on which he will return to the ring. Photo: Joe Scarnici/Getty Images

Victor Ortiz is back ÔÇª again. Cue the eye rolling.

Ortiz, the former welterweight titleholder, has to be one of the most ridiculed former champions in the world. And his merciless detractors will say he has earned the criticism with his missteps in the ring.

Ortiz said he long ago stopped paying attention to those who seem to revel in bashing him. Robert Diaz, a Golden Boy Promotions matchmaker, said the criticism is overly harsh. And Ortiz’s always-candid new trainer, Joel Diaz, understands where some fans are coming from even as he supports his fighter.

The three see eye to eye to eye on one thing, though: It’s not too late for Ortiz, only 27, to realize his full potential.

“I know what people think,” Ortiz said at a Los Angeles press conference to promote the Dec. 13 Amir Khan-Devon Alexander card, on which he’ll fight. No opponent has been determined. “I’m sure they’re rolling their eyes and writing me off like they always do. …

“When I come back and win the belt again, you know what they’re going to say? ‘We just knew it.'”

When people think of Ortiz, they don’t think about his impressive victory over Andre Berto that saw him win the WBC 147-pound title in 2011.

And they think of Ortiz’s last two ill-fated fights, a TKO against Josesito Lopez – the result of a broken jaw – and a second-round knockout against Luis Collazo.

Talented? Ortiz is definitely that. Mentally soft? That’s how many people feel at the moment.

Ortiz, who has been in the ring only once (against Collazo in January) in the past two and a half years, has spent more time on various-sized screens than he has fighting opponents and his image. He took part in several projects, including the film “Expendables 3” and television’s “Dancing with the Stars” since 2013.

Now, he said with conviction, he has set his second career aside to see what he can do in his first.

What can Ortiz be?

Robert Diaz, the Golden Boy matchmaker, won’t make predictions but said he knows three things: 1. Love him or not, Ortiz is fun to watch. 2. He has ability. Few dispute that. And 3. His youth will work in his favor in this latest return to the ring.

“The fans have to understand that this is a young guy,” Diaz said. “He’s not a 40-year-old guy coming back. If that were the case, people could say he’s doing it for the money or whatever. He’s a young fighter and he hasn’t lost to just anybody. If he was losing to last-minute opponents or guys like that, I would say, ‘Victor, take a different route. This isn’t for you.’

“But he lost to Mayweather and Luis Collazo. Before he lost to Khan, Collazo was one of the most dangerous fighters out there. If Victor fights guys like that and loses, he’s criticized. If he doesn’t fight these guys and wins, he’s criticized. He can’t win. … Victor has the skills and I know he can punch. I’d like to see him fight the winner of the main event (Khan vs. Alexander). Wouldn’t that be exciting?”

Joel Diaz, who has been working with Ortiz since the summer, also sees a high ceiling. He agrees with the matchmaker, describing Ortiz as quick, skillful and a hard puncher with both hands.

At the same time, the trainer acknowledges that one overriding question must be answered: Does Ortiz have the mental toughness to succeed at the highest level?

Those are strong words from a fighter’s current trainer but nothing he wouldn’t – and hasn’t – said to Ortiz’s face. Diaz’s goal: Do and say everything possible to make sure Ortiz never looks for a way out again.

Ortiz was asked at the press conference what it’s like to work with Diaz, whose gym is in the small desert town of Indio in southeastern California. He paused … and then smiled weakly. “Hard,” he said. “Very hard.”

That’s Diaz’s plan. The trainer and those in his stable – including former welterweight titleholder Tim Bradley – are pushing Ortiz as hard as they can to see whether he’ll crack. So far he hasn’t, at least not to a significant degree.

The road ahead is long though. Diaz said Ortiz’s confidence is low after the loss to Collazo. They are in a rebuilding process.

“Victor sparred a real tough kid [on Monday], a welterweight who doesn’t have the greatest ability but the kind of guy who never steps backward,” Diaz said. “You can hit him 100 times and he keeps coming. He gets stronger as the rounds go on. I put Victor in with him on purpose. If he’s going to break, he’s going to break here. And he did good, even in tough situations.

“Around the fourth round (of six) though, [Ortiz] slowed down a little and started to hold … so I started talking to him while he was sparring. He says, ‘C’mon, Coach, stop talking. You’re confusing me.’ I said, ‘Really? You want me to stop talking? I’m guiding you.’

Bradley also is playing the role of mentor.

The conqueror of Manny Pacquiao is known for his skills and athleticism but left no doubt about his toughness in a grueling war against Ruslan Provodnikov, one in which Bradley was almost stopped. For Bradley, quitting wasn’t an option.

“The other day Victor and Tim went to the [running track],” Joel Diaz said. “They were stretching. Tim told him, ‘Boxing isn’t easy; it’s a tough, f—ing sport. You have to show what you’re made of. … One thing I’m telling you: When you get in the ring, you a finish the fight. Look at me. I was knocked out against Provodnikov and I kept fighting. I always look at it like this: My family is going to eat or your family is going to eat. I need to feed my family.’

How much potential does Ortiz have?

“A lot,” Joel Diaz said. “He has the natural ability to fight and power in both hands. There are a few punches he doesn’t know how to throw because no one taught him. Once he gets those down, I think he can do some serious damage.

“And I can see his confidence starting to come back. Once that’s back, he could be unstoppable.”

Ortiz undoubtedly has some work to do to rebuild his belief in himself. You wouldn’t know it by talking to him though.

Disappointments, he said, are inevitable. Everyone gets knocked down. He seems to understand now more than ever that the goal is simply to get up when it happens.

“I don’t consider those things bad,” he said, referring to his losses. “You run into things in life. Someone told me, ‘This is just setting you up for greatness. Just shake it off.’ Honestly, that was a little hard to swallow but I can understand that when I think about it.

“I’m going to take my time now, work hard and get back into the rankings – where I belong.”