Bernard Hopkins on Sergey Kovalev: ‘I know everything about him’ 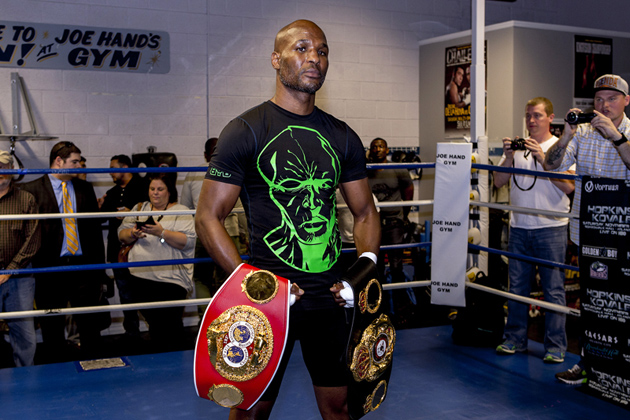 As a fighter who is swiftly approaching half a century in age and who will enter the ring on Saturday opposite arguably the most devastating puncher he will have ever faced, Bernard Hopkins claims to know exactly what he is up against.

In fact, the aging warrior asserts that by the time he climbs through the ropes against Sergey Kovalev at Boardwalk Hall in Atlantic City, he will know as much about Kovalev as his rival knows about himself.

“I’ve been watching this guy; I dug up amateur fights of this guy,” said Hopkins, who turns 50 in January. “I know how he breathes; I know how he sits down. I know where he sits down, what he thinks. I know everything about him.”

Hopkins will put his IBF and WBA light heavyweight titles on the line against Kovalev’s WBO title in an HBO-televised match-up. Already the oldest man to both win a major title, having twice accomplished that feat, Hopkins is also the oldest to unify.

“This is nothing to sneeze at; that’s the main thing,” said Hopkins. “But just being able to be around as long as I’ve been and still fresh as a daisy, I believe and I’ll prove it Nov. 8.”

A future Hall-of-Famer, Hopkins won a unanimous decision over previously unbeaten Tavoris Cloud in March 2013 to extend his own record as the oldest man to win a significant crown.

Hopkins first set the record at the age of 46 by outpointing Jean Pascal for the WBC title in May 2011 before being dethroned following a majority decision loss to Chad Dawson in April 2012.

“There’s no fighter I wouldn’t put my record up against,” said Hopkins. “In this era, in any class. I put the work in to have the track record and be taken seriously.”

Hopkins’ triumph over Trinidad added the WBA title to his IBF and WBC belts, unifying the 160-pound division for the first time since 1987 and tying Carlos Monzon with his record 14th defense.

After he lost to Taylor and then endured an immediate rematch loss, Hopkins rose into the light heavyweight division for victories over Antonio Tarver, Winky Wright, Kelly Pavlik, Enrique Ornelas and Roy Jones Jr., his lone defeat in the division prior to Dawson coming by way of split decision against Joe Calzaghe.

Two of Hopkins’ biggest wins were over Tarver and Pavlik in June 2006 and October 2008, respectively, with both fights taking place at Boardwalk Hall in Atlantic City.

Although Hopkins won his last appearance at Boardwalk Hall by unanimous decision over Karo Murat in October 2013, he is not invincible there, as evidenced by his loss to Dawson 17 months earlier.

“I have the same thoughts on Kovalev that most people here do. He’s a dangerous puncher,” said Hopkins of Kovalev, 31, who is 13-0-1 with 13 knockouts in his past 14 fights.

“He has an over 90 percent knockout rate and anyone who fights this guy has the opportunity to not be the same. We won’t take anything away from this guy because he’s real. But on Nov. 9, we don’t want anyone saying what they aren’t saying now.”

From Jones to Taylor to Calzaghe to Dawson, the men who have vanquished earned victories over Hopkins were not known primarily as fighters with power but also with speed, boxing skills and athleticism – unlike Kovalev.

“Kovalev is a threat to anybody. It won’t be an easy fight, even if it looks easy to you. I don’t just have to beat the man but I have to beat a lot of people. They’re either going to watch me win or watch me lose and I don’t mind playing that game. I don’t believe in luck,” said Hopkins.

“I believe in whoever brings the best of themselves and whoever sacrifices to be victorious will win. There’s no definition really behind it. Just enjoy it; understand it and realize that you might not be alive to see it again…come Nov. 8 on HBO, you get to watch artwork. You’re watching Miles Davis and Louis Armstrong with gloves on.”

Click here for a video of the making of Hopkins-Kovalev