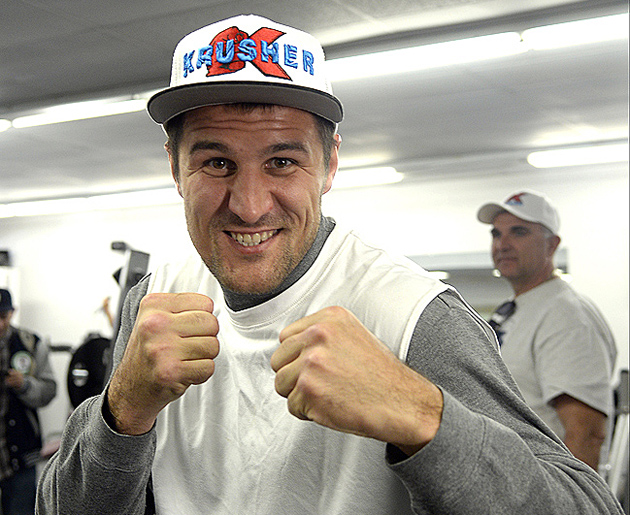 Sergey Kovalev agrees that Bernard Hopkins is “an alien,” adding, “I don’t really understand” what he is saying.

Hopkins puts his IBF and WBA light heavyweight titles on the line against Kovalev, his WBO counterpart, at Boardwalk Hall in Atlantic City on HBO.

Nicknamed “The Alien,” Hopkins (55-6-2, 32 knockouts) will be doing so just over two months before he turns 50 in January, having become the oldest man to both win a major title – he’s done that twice – as well as the oldest to unify.

“It is not easy to overlook Hopkins,” said Kovalev, 31. “I think when he’s 60 years old, he’ll be in the same condition. He’s an alien but I have to send him to the moon and maybe from there, he’ll go by himself to Mars.”

Hopkins first set the record at the age of 46 with a unanimous decision over Jean Pascal for the WBC title in May 2011 before losing it by a majority decision to Chad Dawson in April of 2012.

Kovalev (25-0-1, 23 KOs) is 13-0-1 with 13 knockouts in his past 14 fights, and was last in the ring for a second-round stoppage of Blake Caparello in August. Kovalev was dropped in the first round by Caparello, whom he floored twice in the final round.

Although Kovalev is accustomed to finishing off his opponents, Hopkins said the Russian fighter will be in “alien” territory against him.

Kovalev, for his part, implies that much of Hopkins’ talk is either foreign, ignored or simply goes over his head.

“I don’t really understand what Bernard is saying,” said Kovalev. “It doesn’t matter what he says. Even if I understood, I wouldn’t care. I don’t worry about him. I’ll go into the ring and do my job.”

Click here for a video of the making of Hopkins-Kovalev