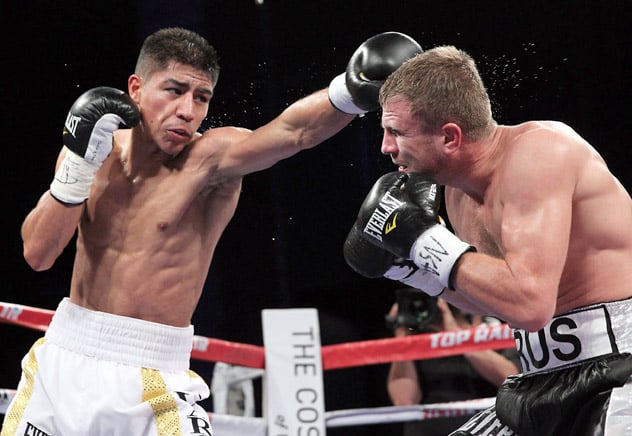 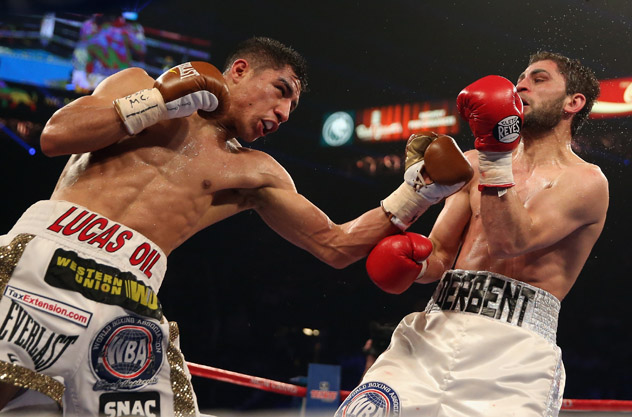 Jessie Vargas has a new trainer, a new strength and conditioning coach, and could soon be competing in a higher weight class.

“I have a new team with Roy Jones (Jr.), and I have Angel Heredia, the strength and conditioning coach who worked with Juan Manuel Marquez when he beat Manny Pacquiao. We’re going to be stronger than ever, with more endurance than ever and with more heart, and we’re going to be in better shape and better everything,” said Vargas, 25.

A resident of Las Vegas, Vargas said he discovered that he would lose former cornerman Ismael Salas in August when the latter accepted a coaching position abroad.

“A little bit before we were to start the training camp for DeMarco, Ismael Salas, my last trainer, he took on a deal to train some fighters in England. From what he was telling me, they were offering him a good amount of money that he was happy with,” said Vargas.

“That was a little bit surprising that it happened, because he was so unsure whether he was going to say yes or no. I told him that I wished him all the best, but I told him that I’m a fighter that’s out of Las Vegas. My family is in Las Vegas, my fans are in Las Vegas, so I can’t see myself going anywhere else, especially as far away as England. When he made the decision to take off for England, I was left to train myself.”

But fortune smiled on Vargas, who met Jones at the four-division titlewinner’s fight academy in Las Vegas.

“It was just coincidence. He told me, ‘You know what, man, I’ve seen you fight, and I would like to see some improvement. I would like to see you work on this, and on this here and to throw your punches like this, with more power.’ He told me to come into his office one day,” said Vargas.

Although Vargas didn’t immediately mentioned Salas’ exit to Jones, he did show up at Jones’ training facility the next day.

“I had to take him up on his offer, and within a half an hour of him teaching me a few things, I said, ‘Wow, he has a lot to show me, and a lot to teach me, and a lot of knowledge about the game,'” said Vargas.

“That’s when I opened up about my training situation and I asked him, ‘I would like for you to train me,’ and he liked the idea, and he said, ‘Yes, I’ll train you,’ and we’ve been together ever since. There’s a nice bond developing and we have a lot of mutual respect for each other.”

Vargas will be facing his third straight southpaw in DeMarco with the goal of challenging left-hander Pacquiao in the future. In fact, Vargas-DeMarco will support Pacquiao’s WBO welterweight title defense against rising WBO 140-pound beltholder Chris Algieri at the Cotai Arena.

“I expect a tough, rugged fighter to be in front of me, and a fighter who is going to come out strong. But he’s going to feel the power, and he’s going to see the speed. As soon as the first bell rings, he’s going to be in for a big surprise, because he’s going to realize that he’s not in with the same fighter he saw win my last fight,” said Vargas.

“I feel that I’m going to be the bigger fighter, the more intelligent fighter, and the more experienced fighter. I know that he has had a lot of experience, but he’s not seen a fighter of my caliber, and I’m going to show that on Nov. 22. I take nothing from him. He has guts and he’s strong, but I think that I have so much more to show than in the past.”

Although Pacquiao is said to be considering a drop into the 140-pound division, Vargas said he has spoken to Top Rank CEO Bob Arum about rising in weight.

“I am considering a move up very soon. I want to stay as long as I can at 140, but I’m pretty sure that I’m moving up after this one. I have spoken to Bob about the weight already before this fight, and he wanted me to defend the title once more before considering some big opportunities up ahead,” said Vargas.

Since losing his WBC lightweight title to Adrien Broner in November 2012, DeMarco, 28, is 3-0 with two knockouts as a welterweight. He was last in action for a unanimous decision over Lanardo Tyner, who floored DeMarco in the first round.

Vargas said DeMarco will see a more fluid boxer in him, given his exposure to Jones.

“Roy is such an intelligent individual that he can explain something to you and he knows so much about the game that he can replicate exactly what he wants you to do, and it makes it so much easier to understand and so much easier to do things. He tells me to ‘Try this,’ and I try it, and then, bam, it comes through. I feel so much more comfortable in the ring. Plus, I have a lot of advantages,” said Vargas.

“I feel much more comfortable with my attacks, transitioning from offense to defense and back. He’s helped me out plenty in such a short amount of time, and I’m very thankful for Roy taking on the task. I have more technique and more talent and I’m going to show it off on that night. I’m going to be the bigger man and the stronger man. I have a big heart, and I’m going to show that off, too, so expect fireworks.”

Jean Pascal: Roy Jones Jr. will be in my corner vs. Don George