Dusty Hernandez-Harrison stops Michael Clark in the first round 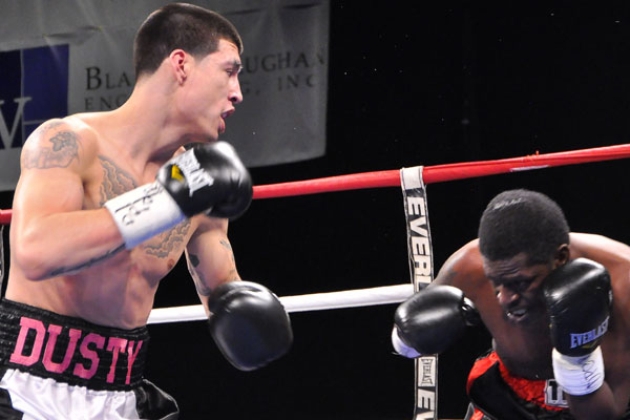 Welterweight prospect Dusty Hernandez-Harrison used an overhand right to knock out Michael Clark in the first round on Saturday night at the Constitution Hall in his native Washington, D.C.

“We watched tapes and thought there might be an opportunity with an overhand right,” said Hernandez-Harrison, who weighed in at 146 pounds compared to 149 for Clark. “I felt great and learned a lot preparing for this bout. It felt great to fight at home, and I really appreciate the support.”

Hernandez-Harrison had suffered an ankle injury that forced the cancellation of a scheduled Sept. 27 bout against Hector Munoz that had been slated for the Constitution Hall.

“The injury, the physical and mental side, that goes with it,” said Hernandez-Harrison, who is 5-0 with two knockouts during 2014. “I was prepared for 10 rounds and just saw an opportunity and took it.”

Hernandez-Harrison was coming off a unanimous decision over Wilfredo Acuna in July which took place in support of WBA middleweight titleholder Gennady Golovkin’s third-round stoppage over ex-beltholder Daniel Geale in the big arena of the Garden in New York City.

“Dusty performed like the top welterweight prospect in the world, and showed patience despite the excitement of fighting in front of his hometown fans,” said Jeff Fried, Hernandez-Harrison’s promoter with All-In Entertainment.

“Dusty learned he can overcome an injury, a postponed bout and go out and perform at an elite level. That is what a world champion does and Dusty is on his way to that championship. Dusty will be back in the ring very soon and continuing his journey as one of the future superstars of boxing. He is ready for the next step.”

Quarles rebounded from a unanimous decision-loss to Corey Rodriguez in August, and Sharpe is 0-14-3 in his past 17 fights, being stopped seven times in that stretch.