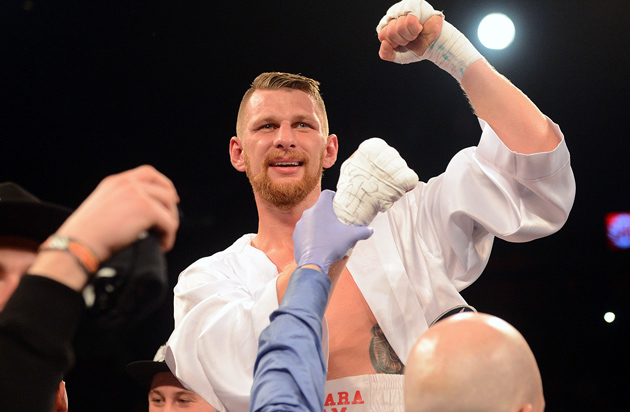 Light heavyweight contender Andrzej Fonfara won a hard-fought decision over game Doudou Ngumbu in the main event of a Showtime tripleheader on Saturday at the UIC Pavilion in Chicago. Fonfara won the entertaining 10 rounder by scores of 98-92, 97-93, 97-93.

Ngumbu, a 32-year-old fringe contender from France by way of Congo, started fast and troubled THE RING’s No. 8-rated light heavyweight with his awkwardness and aggression in the first two rounds, but Fonfara (26-3, 15 knockouts) got his offense going in Round 3, which made for a competitive fight despite the somewhat one-sided official scores.

Ngumbu (33-6, 12 KOs) outlanded Fonfara in spots, usually connecting with wide overhand rights and sneaky hooks, but the “Polish Prince,” who was fighting in his adopted hometown, was the busier of the two. Fonfara, who lost for the first time in 16 bouts when he dropped a unanimous decision to RING/WBC champ Adonis Stevenson in May, put forth the more consistent offense, scoring with stiff jabs, one-two combinations and left hooks to the body.

A counter left hook rocked Ngumbu into the ropes in Round 5, but to the globe-trotting fringe contender’s credit he remained game and continued to take the fight to the local favorite as much as he could during the second half of the bout. He simply didn’t let his hands go enough and lacked the punching power to win rounds against Fonfara, whose high workrate, heavy hands, iron will and solid chin reminded fans why he is a player in the 175-pound division and is also a lot of fun to watch.

However, his flat feet, average hand speed and complete lack of head or upper-body movement reminded most observers why he will probably never win a major world title.