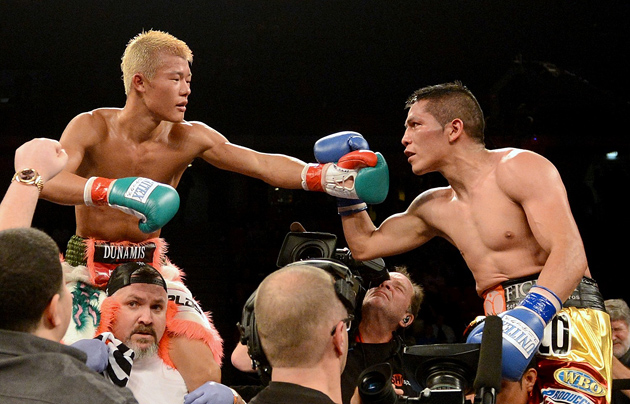 Undefeated bantamweight titleholder Tomoki Kameda defended his WBO belt with a split decision over Alejandro Hernandez on the Andrzej Fonfara-Doudou Ngumbu undercard on Saturday at UCI Pavilion in Chicago.

Kameda (31-0, 19 knockouts) made good use of his size and speed advantages in the first seven rounds of the fight, outworking Hernandez as he pressed the smaller man to the ropes. However, Hernandez, a former two-time title challenger at flyweight and junior bantamweight, began to letting his hands go and walking to the Japanese favorite in Round 8.

In Round 9, the 23-year-old titleholder suffered a cut on the outside area of his left eyelid, which gave Hernandez an opportunity to take the fight to the bigger man and the 28-year-old Mexico City native went for it, putting Kameda in a shell for most of the round.

Kameda appeared to resume control of the bout in Round 10 with a stiff jab and lateral movement, but he coasted a little bit in the final two rounds, which may account for the close nature of the official scorecards. Hernandez (28-11-2, 15 KOs) closed the strongly, but it was too little to late. The veteran, who has faced quality opponents during his career (though he seldom beats them), is now 0-3 in WBO title bouts.

Kameda, the youngest of Japan’s famous fighting brother trio, did not make the statement he had hoped in his second consecutive U.S. appearance. He is famous in Japan thanks to his older brothers, Koki and Daisuke, and is even known in Mexico, where he moved to when he was 15 years old, but he’ll need to close the show a little better than he did on Saturday if he hopes to earn the respect of U.S. boxing fans who often ignore fighters in the sub-featherweight divisions.