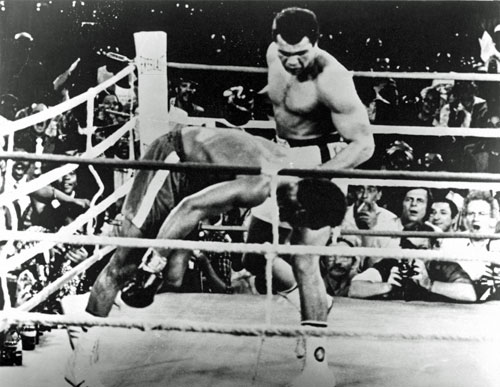 I was asked during an interview on a U.K. radio talk show whether I thought the Rumble in the Jungle – Muhammad Ali’s historic eighth-round knockout of George Foreman, which took place 40 years ago in what was then Zaire – was the biggest fight of all time.

I said, no. I thought the second fight between Joe Louis and Max Schmeling during the rise of Nazism was bigger. I second guessed myself after I hung up the phone but, after more reflection, I still believe Louis-Schmeling II was the most important fight ever – perhaps the most important sporting event ever.

To be sure, there have been a number of iconic fights.

A good place to start might be the Jack Johnson-Jim Jeffries fight in 1910, which was dubbed “The Fight of the Century.” It took place during the pathetic Great White Hope era, when white racists were so determined to bring down the black champion they lured Jeffries out of retirement only to watch him get knocked out in 15 rounds.

Blacks everywhere celebrated but the result also sparked race riots across the country that claimed many lives in a number of cities. Still, it was an important event in the advancement of blacks.

“I think it gave blacks a sense of empowerment, a sense that, ‘Given a chance to compete on equal terms, we can compete and win,'” said Randy Roberts, an historian who has written a number of books on boxing.

A faded Johnson finally lost the title to Jess Willard in 1915. No black heavyweight fought for the title again until Louis in 1937.

Louis was a young, fast-rising sensation when he lost in 1936 to the German Schmeling, who had announced before the fight that he had found a weakness in Louis he would exploit. Louis was stopped in 12 rounds.

Schmeling became a hero in his country and an important symbol of Adolph Hitler’s perceived Aryan superiority in the buildup to World War II. Thus, the world was riveted when Louis, who took the title from Jimmy Braddock in 1937, agreed to face Schmeling a second time in 1938.

The fight was important strictly in boxing terms. Louis said openly that he wouldn’t feel as if he were the true champion until he beat Schmeling. The matchup was more than that, though. It was a battle between good (Louis) and evil (Schmeling), one with the potential to either bolster or debunk Hitler’s twisted perspective.

America was still far from a just society but it evidently had come some way from the days of Johnson, for Americans of all colors and creeds looked past Louis’ race and supported him enthusiastically over Schmeling.

Of course, Louis, focused like never before or afterward, embarrassed Schmeling and the Nazis by brutally knocking out their man in only 124 seconds. The Germans weren’t so superior after all. This time whites and blacks celebrated simultaneously after a black man knocked out a white man.

Two other fights involving Ali were very important, his first and third meetings with arch rival Joe Frazier. The first fight, shortly after Ali’s conviction for draft evasion was overturned, took place in 1971 at Madison Square Garden in New York City. In terms of glitz, Ali-Frazier I might be unrivaled. It matched two undefeated heavyweights during the golden era of the division and attracted the biggest names in the entertainment business to the arena.

The Thrilla in Manila in 1976, Ali-Frazier III, also was enormous. Ali had already beaten Foreman to regain the championship and was defending against his nemesis in the rubber match of their not-so-friendly three-fight series. The world watched in awe as the two engaged in one of the most brutal battles in boxing history, Ali emerging victorious when Frazier couldn’t come out for 15th round. Afterward, Ali described his experience as “next to death.”

The Rumble in the Jungle probably was more important than these fights for one reason: It made Ali.

Foreman was seen much as Sonny Liston and Mike Tyson were before and after him: As unbeatable. The big, bruising 1968 Olympic gold medalist was undefeated (40-0) and had knocked out all but three of his opponents. Ali was 32 and clearly not the fighter he once was, having split two close fights with Ken Norton and defeating Frazier in their second fight the previous year. Ali was a star, known the world over, but he was a clear underdog.

That’s why it was so dramatic when he not only won but scored a stunning knockout. He had done the impossible, which sealed the perception of him as the tongue-in-cheek label he always had for himself: The Greatest. If Ali wasn’t the most revered athlete in the world before that fight, he certainly was afterward.

“The result was is what made the fight so important,” Roberts said. “I don’t think it was an inherently important fight. ÔÇª If Ali had been defeated, if he had been knocked out, I don’t think it would’ve been a big fight at all. People would’ve said, ‘Ali was over the hill.’

“I think it became legendary because of the rope-a-dope, the fact Ali beat a fighter considered indestructible. It allowed Ali to reinvent himself. After this fight and then the Thrilla in Manila, he had a resume no heavyweight was ever going to top.”

Again, there have been other important fights. Dempsey-Tunney II, Leonard-Hearns I, Tyson-Holyfeld II are only a few more on a very special list.

None tops Louis-Schmeling II in terms of magnitude and significance. Ali-Foreman probably comes closest because it gave rise to a legend.