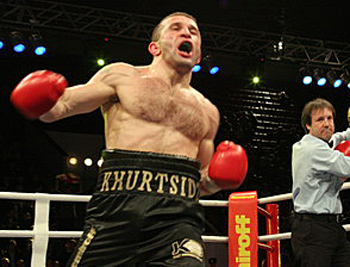 But as long as he relies on savvy ring generalship and heart, there may be little that could get in Khurtsidze’s way of challenging for another world title.

Khurtsidze struggled early, but dominated the rest of the way in stopping Eddie Hunter in Round 5 at Florentine Gardens on Thursday. The Georgia-born Khurtsidze improves to 29-2-2, 18 knockouts. Hunter, who resides in Seattle, drops to 10-11-2, 4 KOs.

It was Khurtsidze’s sixth victory in a row since his 12-round unanimous decision loss to Hassan N’Dam N’Jikam in October of 2010.

Hunter was able to hang in there with Khurtsidze during the first two rounds, using his height and reach to score from the outside. Undaunted, Khurtsidze was able to slip some of Hunter’s punches, retuning hooks and crosses to Hunter’s head.

Within the first 20 seconds of the Round 3, Khurtsidze dropped Hunter along the ropes with a combination. Hunter got up and fired back punches, but was stunned by another Khurtsidze combination at the end of the round.

Khurtsidze was relentless the rest of the way, keeping Hunter on the defensive during the second half of the fight. Hunter tried to fight back, but was beginning to take a lot more punishment with each passing minute. In the fifth round, Khurtsidze landed a hard combination to the head that prompted Hunter’s corner to throw in the towel. Referee Ray Corona waved the fight over at 2:13.

Junior middleweight prospect Stanyslav Skorokhod stopped David Lopez in the second round. The Ukrainian-born Skorokhod (8-0, 6 KOs), who trains at the nearby Wild Card Boxing Club, dominated the action, keeping the southpaw Lopez on the defensive.

In the second round, Skorokhod stunned Lopez (4-11-3) with a right uppercut to the head. That punch brought about a cascade of blood from Lopez’s nose. As the round progressed, Lopez was battered repeatedly by Skorokhod, which might have prompted Lopez’s corner to throw in the towel.

Referee John McCarthy waved the fight over at 1:46.

– Junior middleweight Urmat Ryskeldiev knocked out Bernardo Guereca in the first round. Ryskeldiev (10-3-1, 6 KOs) dropped Guereca with a left hook to the stomach, prompting referee Ray Corona to wave the fight over at 2:27 as Guereca (17-22-1, 4 KOs) remained on the canvas, writhing in pain.

– Junior featherweight Juan Roman was successful in his professional debut, winning a four round unanimous decision over Gabriel Braxton (1-6). All three judges scored the bout 39-37 in favor of Roman.