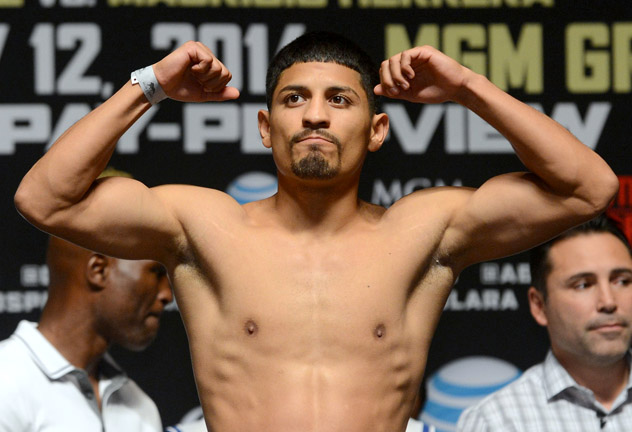 The Dec. 13 Showtime-televised tripleheader will be headlined by former titleholders Amir Khan and Devon Alexander in a welterweight bout, with support from Keith Thurman and Leonard Bundu in a 147-pound clash of unbeatens.

Also on the card will be three-division title winner Abner Mares in a featherweight bout, and former welterweight beltholder Victor Ortiz. Mares and Ortiz will fight opponents to be determined.

“A huge main event with two former champions looking to take a major step back towards a title shot, undefeated fighters going head-to-head on the undercard, our last big show of the year,” said De La Hoya.

“Dec. 13 at MGM Grand will have it all. Golden Boy Promotions is finishing 2014 strong, and will move into 2015 continuing to make good on our promise to make the most exciting fights for boxing fans.”

In his last fight in May, Khan (29-3, 19 knockouts) scored a one-sided unanimous decision over former welterweight titleholder Luis Collazo, whom he floored three times on the undercard of the Floyd Mayweather-Marcos Maidana rematch.

“Getting back in the ring is all I’ve been looking towards these last few months. I want to show everybody that I’m a major force at 147 pounds, and I’m ready to take on the best,” said Khan, 27. “This fight with Alexander has been on the table for a while, but it is finally happening, and I plan on winning impressively to show that I am truly one of the best welterweights in the world.”

Alexander (26-2, 14 KOs) is coming off a unanimous decision victory over Jesus Soto Karass at in June, and has faced seven current or past world titleholders in his last nine fights. Alexander’s run includes decision victories over two of Argentina’s most devastating punchers ÔÇö Maidana and Lucas Matthysse.

“I’ve wanted this fight for a long time,” said Alexander, 27, whose lone defeats are to two-division titlewinner Timothy Bradley and former IBF titleholder Shawn Porter. “I’m ready to show that I’m worthy of this opportunity and the opportunities ahead after I win on Dec. 13. I’ve worked hard my entire life and now the pressure is on to really show what I can do.”

Last December, Thurman scored a ninth-round technical stoppage over Jesus Soto Karass, and, before that, he registered a 10th-round knockout of previously unbeaten Diego Chaves in July 2013, flooring the Argentine once each in the ninth and final rounds.

“I can’t wait to get back in the ring and defend my title,” said Thurman, who has the WBA’s “regular” belt [Note: THE RING recognizes Floyd Mayweather Jr. as the WBA titleholder.] “I’m going to give all my fans the performance of a lifetime and prove why my name should be at the top of the welterweight conversation.”

A resident of Lazio, Italy, who was born in Sierra Leone, “The Lion” Bundu has scored knockouts in four of his past six victories, but will be fighting on American soil for the first time against Thurman. Bundu is also the current European welterweight titlist, holding the belt since June 2011.

In consecutive bouts against Italy’s Daniel Petrucci, Bundu battled to an eighth-round technical draw in June 2011 before winning their rematch by unanimous decision less than five months later.

“Dec. 13 is going to be the biggest night of my professional career thus far,” said Bundu, who turns 40 on Nov. 21 – two days before Thurman’s 26th birthday.

“To be fighting in the United States, in the fight capital of the world, Las Vegas, on Showtime, against one of the most promising American prospects is a dream come true. But Keith Thurman doesn’t scare me. I know that I have what it takes to win and truly make a name for myself throughout the boxing world.”

Andrade (21-0, 14 KOs) has won his past two fights over previously unbeaten Vanes Martirosyan by split decision for the vacant belt last November, and scored a seventh-round stoppage of Brian Rose in June. In January 2013, Andrade unanimously decisioned Freddy Hernandez on Showtime.

“There is no way I’m letting go of my belt,” said Andrade, 26. “Jermell Charlo is a good fighter, but nothing is going to stop me from defending my belt and raising my hand in victory on Dec. 13. I am confident that this will be a fight fans won’t want to miss.”

In his past two fights, Charlo (24-0, 11 KOs) has unanimously decisioned Gabriel Rosado in January and Charlie Ota in May.

“I am beyond excited to finally get a shot at a world title. This is what I’ve been waiting for. I’m ready to be a world champion,” said Charlo, 24, the twin brother of fellow 154-pound contender Jermall Charlo. “Nothing is going to stand in my way. Andrade is the champion and I’m not looking past him at all, but this is my time. I know it. The title will lead to bigger and better things and that is what I’m all about.”

Mares (27-1-1, 14 KOs) was last in action in July, surviving a cut over his left eye during a unanimous decision over rugged Jonathan Oquendo on the undercard of Canelo Alvarez’s split decision victory over Erislandy Lara.

Oquendo represented Mares’ first fight since August 2013 when he was dethroned as WBC featherweight titleholder following a shocking first round knockout loss to Jhonny Gonzalez. Mares was THE RING’s No. 5-rated pound-for-pound fighter entering the bout with Gonzalez, who floored him twice.

Mares, 28, was in his only fight under trainer Virgil Hill against Oquendo, and has since returned to longtime cornerman, Clemente Medina, under whom he debuted as a fighter and won his three title belts.

“I am so happy to be back at MGM Grand after my recent win in July,” said Mares. “My ultimate goal is another shot at a world championship and a win on Dec. 13 will help me get there. I plan on putting on a great performance and showcasing my skills once again.”

Ortiz (29-5-2, 22 KOs) was last in action for a second-round knockout loss to Collazo in January. Ortiz was ending a 19-month ring absence, having been cast for a role in the third installment of Sylvester Stallone’s The Expendables and participating in Dancing With The Stars during his time away from the sport.

Ortiz had previously been in the ring in June of 2012, when he suffered a ninth-round stoppage loss to Josesito Lopez after which he required a two-hour surgery to repair a broken jaw.

“I’m excited to get back into the ring. I got caught in my last fight,” said Orti, 27. “But I’m ready to get back to work and improve my game. I know what it takes to win and that is what I plan on doing on Dec. 13. I’m thankful for the opportunity and looking forward to giving fans a great show.”