Change is good for Gabriel Rosado 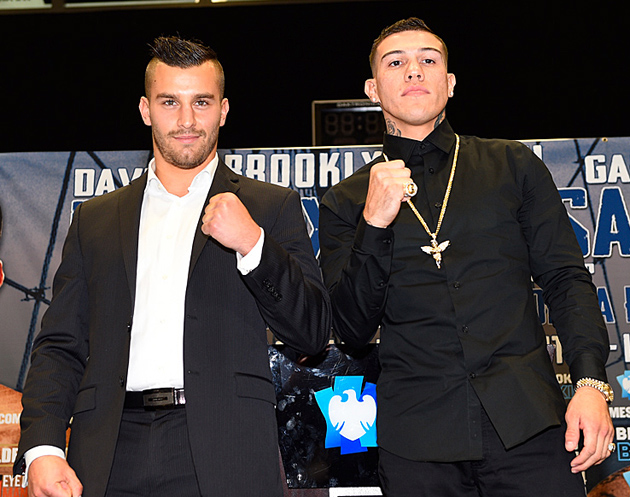 BROOKLYN, New York – Gabriel Rosado wants you to believe he’s changed. That losing against top contenders has been worth it, filling him with more resolve, more experience and a new perspective.

That when he faces David Lemieux in the Montreal KO artist’s U.S. debut on Dec. 6 at Barclays Center he’s going to exhibit levels of his game that fight fans have not yet seen.

There have been some things that have changed for Rosado, who was at a Wednesday press conference at Barclays to kickoff the Golden Boy Promotions event. The Philadelphian has a new trainer in veteran Jesse Reid, a new outlook, and a new driving goal to win for the first time – inside a boxing ring – since he stopped Charles Whittaker in 10 rounds on Sept. 21, 2012.

Rosado lost his last three of his last four fights – granted, the losses were to the undefeated trio of Gennady Golovkin, Peter Quillin and Jermell Charlo – which has stuck him, once again, with the “opponent” tag, a stigma he carried throughout much of his early career.

He’s in the underdog role again the 25-year-old Lemieux, who’s looking at Rosado as a stepping stone towards possible fights with Golovkin, Canelo Alvarez or Miguel Cotto.

“I’m really looking forward to this fight,” Lemieux said. “My training camp has already started and I am in great shape. I want to take this opportunity to prove that I represent a real threat to the middleweight division. Gabriel Rosado is a tough fighter and he has fought a lot of talented boxers and has established his credibility. This will be a good test for me and I’m working really hard to deliver an amazing performance.”

Rosado is coming off his longest stretch of “boxing ring” inactivity in his career. It’s been an 11-month gap between his last fight inside a ring, the January loss to Charlo, and now.

[Editor’s note: Rosado’s stoppage of middleweight fringe contender Bryan Vera in a new combat sports league’s main event in August does not count as a professional boxing match because it was conducted under different rules.]

That time was consumed by surgery on his left eye to clean out scar tissue, give his body time to heal and to stage the fight against Vera which took place in a pit with two-minute rounds in something called “Big Knockout Boxing.”

In Rosado’s mind, the Vera fight counted. He was able to recoup that easy feeling he once had with pair of boxing gloves on. He enjoyed himself, relentlessly attacking as usual, and winning, which he hasn’t been so accustomed to doing lately.

“This is like a new beginning for me,” Rosado admitted. “This time around, after working with Jesse Reid, my new trainer, I’m getting fed a lot of different information and I think I have a lot more focus being away from Philadelphia, and I train a lot better when I’m in Los Angeles.”

Rosado said he moved to Los Angeles from his native Philadelphia about six months ago to work with Reid. He stressed that it was a tough move splitting with long-time trainer Billy Briscoe, who Rosado had been with for 10 years.

Only 28, “The King” said he had felt stale for some time, and was looking for a new set of eyes to pick him apart and piece him back together again.

“I think I just reached a point with my last trainer that we weren’t moving forward, and Jesse is so experienced and has been in the corner of 25 world champions,” Rosado said. “It’s definitely coming along great. I think I got to the point where I went from Golovkin to Quillin, and dropping to 154 against Charlo, and that wasn’t smart. I suffered making that weight. I wasn’t having any fun.

“Boxing has been a part of me. I’ve always had fun with boxing. I thought going into the Charlo fight I had a chance, but I started struggling to make the weight, and I felt pretty bad with getting bad calls. I needed to move to Los Angeles and I had to make this move. Jesse cuts me no slack. When I’m not doing something right, he’ll get on me about it. He stays on top of me and pushes me to get better.”

One of the toughest things Rosado has had to do in his career was parting with Briscoe. In Philadelphia boxing circles, the two were inseparable. If you saw one at a club show, chances are, you would see the other. But Rosado explained it was for the better, and it was an amicable split.

“I wouldn’t have gotten this far if it weren’t for Billy, I give him all the credit,” Rosado said. “It reached a point where being in Philly and doing things the way I was, I went to Billy that I had to make a move. Billy told me he wished the best for me. I think what you’ll see in this fight. You saw that in the Vera fight. That fight brought out a more technical side, I was faster, sitting on my shots, and that’s something I want to do against Lemieux. My last few fights before that, I was going for the knockout and that can affect you.”

So Rosado does not want to force the issue against Lemieux. He’s enjoyed running on the beach, and enjoying some clean mountain air, instead of the gritty, cement-cracked Philly streets.

“It makes it a lot easier to work out and I travel a lot, so it wasn’t that big of a culture shock for me,” Rosado said. “I’m in a good place right now.”