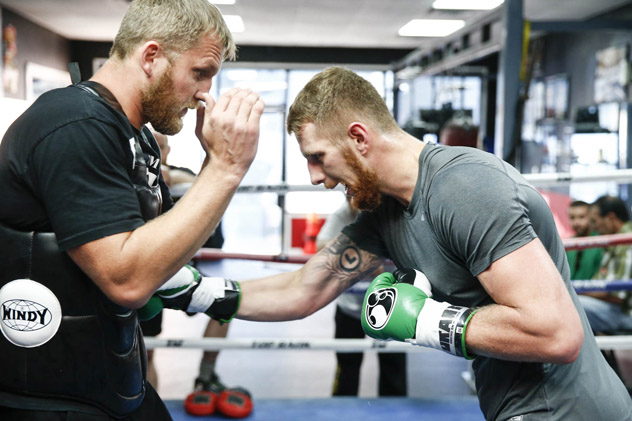 Make no mistake: Andrzej Fonfara wants a rematch with RING/WBC light heavyweight champion Adonis Stevenson, but he’ll have to get beyond Doudou Ngumbu on Saturday to get it.

Fonfara faced Stevenson in May in his last fight, rising from knockdowns in the first and fifth rounds of a unanimous decision loss, but not before flooring the southpaw in the ninth.

“My next step is the rematch with Stevenson, because I feel I can beat him,” said Fonfara, 26, who brought a run of 15 straight victories, 12 by knockout, into the clash with Stevenson. “I don’t know if he’ll take the fight, but if I win this one and become a mandatory challenger at some point, then he’ll have to fight me. I want to be the champion.”

For Fonfara (25-3, 15 knockouts), that journey begins with a Showtime-televised bout at Chicago’s UIC Pavillion, where the Polish fighter will make his 14th appearance against Ngumbu (33-5, 12 KOs) in a co-featured match with RING No. 9-rated bantamweight Tomoki Kameda defending his WBO belt against Alejandro Hernandez.

“I’ve seen a couple of his fights,” said Fonfara, whose last loss prior to Stevenson was by second-round knockout to Derrick Findley in July 2008. “I know he’s quick and has a different boxing style, an odd style. He’s fast and sneaky, but if I want to be the best and get a rematch with Adonis Stevenson, then I need to beat guys like him. I know he’s fought tough opponents in Europe, and he’s used to fighting 10 or 12 rounds.

“He doesn’t have the strongest punch, but he has solid technique and he’s fast. It’s very exciting to be fighting back in Chicago, to be fighting in front of my fans. It’s a huge motivation for me. I want to show everyone that I’m in great shape. We’ll see, if I get a chance to knock him out I’ll knock him out. If not, I just want to win the fight. It doesn’t matter how, I just want to win the fight.”

Ngumbu will be fighting on American soil for the first time, and is coming off a unanimous decision over Johnny Muller that represented his second win since falling by split decision to Igor Mikhalkin in July 2013.

“It’s a huge honor to be able to box on U.S. soil,” said Ngumbu. “The time difference and travel isn’t an issue for me. I’ve fought all over the world so I know how to adapt … We took Fonfara very seriously because he’s a well-known boxer, not just in the U.S. but in the world. So we didn’t take him lightly.