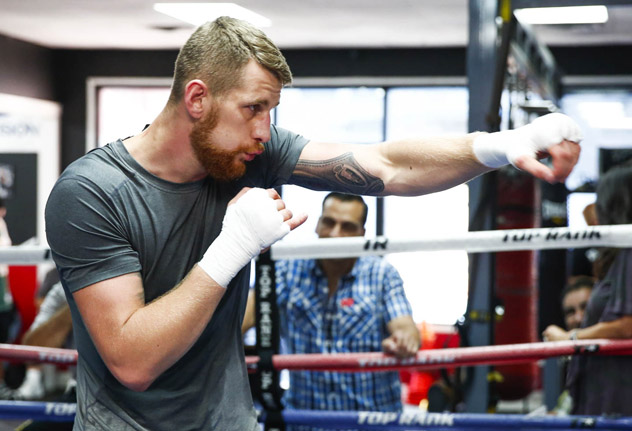 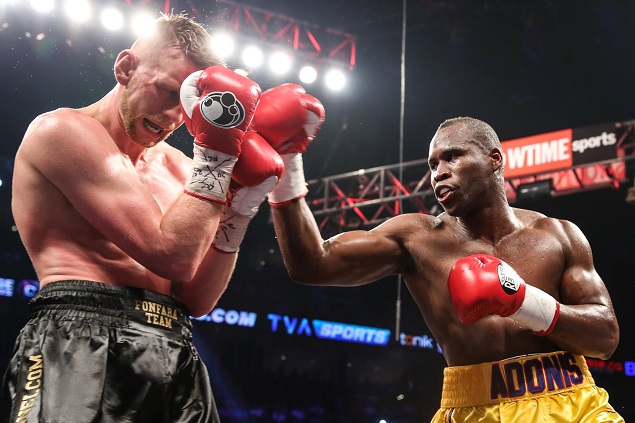 Andrzej Fonfara took all Adonis Stevenson could muster for nine rounds on May 24, before mounting his own offense and dropping the defending light heavyweight champion, almost causing the upset.

Although Fonfara (25-3, 15 knockouts) lost a unanimous decision, he put up a spirited effort and hopes to one day get a rematch with Stevenson. However, first he has to take on French-based Doudou Ngumbu in his adopted home region of Chicago on Saturday.

“He’s not a bad fighter,” Fonfara says of Ngumbu. “He’s very tough and wants to win each time he steps into the ring. He doesn’t come just to collect a check, he wants to beat me and get a chance on Showtime to show what he is made of.”

‘The Polish Prince,’ who set up camp for the third time in Big Bear, California, isn’t looking past Ngumbu but hopes victory will put him once again in line for a title fight.

His trainer Sam Colonna, famed for working with several other prominent Polish fighters including Andrew Golota and Tomasz Adamek, sees this as the perfect opportunity for his fighter to put down a marker in the light heavyweight division.

“The way he’s learning and progressing, you’re looking at the next future champion of the world,” said Colonna.

“If we win this fight there will be a lot of opportunities for us. There are many good up-and-coming fighters at 175 pounds; it’s a very hot division.”

Anson Wainwright – What are your thoughts on facing Ngumbu?

Andrzej Fonfara – This is a good fight for me and for him. I come back from the last fight with Stevenson and I want to show good boxing on Nov. 1. I want to win, a fighter like Ngumbu I must beat if I’m going to speak about world championship fights.

AW – What do you feel Ngumbu brings to this fight in terms of strengths and weaknesses?

AF – He moves a lot, he’s fast and hard to land a punch on him because he moves.

AW – What would you say are your strengths?

AF – Powerful punch, good powerful right hand, use the jab, use the pressure and keep boxing waiting for a good punch (to land).

AW – You’re training for this fight in Big Bear. Tell us about that?

AF – Yeah, this is my third camp in Big Bear, like always, hard work. I’ve got a couple good sparring partners. (The) whole team is here. I feel good, we run a lot, we’re sparring, we do hiking.

AW – Did you spar with Gennady Golovkin before his fight the other week?

AF – No, we don’t spar. We trained together in one gym.

AW – In your last fight you gave a spirited effort against Adonis Stevenson.

AF – That fight was a lot of experience because I did 12 rounds at championship level. Stevenson is a very good fighter, he won a decision. This fight gave me motivation to come back in the future better and stronger.

AW – You took a lot of heat early in the fight but were able to come on strong down the stretch dropping him and hurting him?

AF – Yeah because I am from Poland, I am Polish warrior. I put good work in the camp, we worked very hard, I spent like 10 to 12 weeks preparing for this fight and that’s why I got the power to get back up from the knockdowns.

AW – You were born and brought up in Poland, what was that like?

AF – I was born in Radom but lived in a small city, Bialobrzegi (between Radom and Warsaw). Then I moved to Warsaw, the capital, and I started boxing there. Then I have 120 amateur fights, this helped to get the experience to start pro fighting. I had first fight in Poland then I moved to Chicago and I continued here in the United States.

AW – As you mentioned you moved to Chicago. You were only 18. How did that opportunity to move come about?

AF – I signed a contract with Polish/American boxing group, then I moved here, got one fight here and I choose to stay here in United States because everybody wants to fight in the United States. I always dreamed of fighting here, like the best fighters in the world.

AW – If we look through THE RING magazine ratings at light heavyweight, could you share your comments on each listed boxer.

C – Adonis Stevenson – He thinks a lot in the ring, he’s a strong guy, he’s got good punch. He’s good fighter but like I say I want a rematch and next fight I beat him.
1 – Bernard Hopkins – Is old school, very smart guy. That’s why he wins all his fights. What more can I say? He’s old school and one of the best fighters in the world.
2 – Sergey Kovalev – He’s dangerous and the best light heavyweight now. He has good precision to punch, good distance. He’s very good. We’ll see how he goes with Hopkins because he never fought a boxer like Hopkins.
3 – Jean Pascal – Strong guy but I don’t think he has heart to fight, but still good fighter. I think he’s weak mentally but still very physical guy. Strong guy. One of the best fighters in the light heavyweight division.
4 – Juergen Braehmer – Same thing, experienced guy. He fights only in Germany, he brings his opponents there. I don’t want to say he’s not good but he’s the weakest of the (champions) in the light heavyweight division. (Editor’s note: Braehmer holds the WBA “regular” title, which is not recognized by THE RING.)
5 – Beibut Shumenov – Not experienced guy. He needs more fights to be a better fighter.
6 – Isaac Chilemba – I see him last time where he fought in Atlantic City when Kovalev fight with (Blake) Caparello. He moves good but I don’t think he has strong punch, he is still a good fighter.
7 – Eleider Alvarez – Very good guy, strong guy, he’s like a light heavyweight prospect.
8 – Andrzej Fonfara – (laughs) I don’t like to say too much on me. Everybody saw my fight with Stevenson. I got heart to fight, I got good conditioning and powerful punches. I want to be a world champion and I think next year will be a good year for me.
9 – Nadjib Mohammedi – I don’t know this guy. I can’t tell you much.
10 – Gabriel Campillo – He’s a good fighter, technical fighter, I beat him. He’s a good fighter but he doesn’t have strong punch. I spar with him before my fight with Stevenson. He is still a good fighter and has good skills to be a top fighter in the world.

AW – How do you see Hopkins-Kovalev going the week after your fight?

AF – You never know. It’s boxing. I see it going two ways, one Kovalev wins inside six rounds by KO, but if not, if he does not knock Hopkins out in six rounds, he could lose a decision. If Kovalev wins, he wins by knockout.

AW – Away from boxing what do you enjoy doing?

AF – I have a gym with my partner and best friend who helps me with training, he’s my coach too. I train a lot. I am a soccer fan. My favorite team is Legia Warsaw. Only training and boxing, it’s my life and destiny.

AW – Do you have a message for Ngumbu?

AF – I think he prepared good for this fight because this fight is tough for him.