Reveco cancels flyweight title defense vs. Saengthep due to an injury 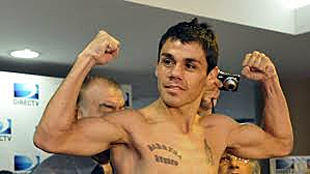 BUENOS AIRES – Argentina’s Juan Carlos Reveco has canceled his WBA flyweight title defense against Thailand’s WBA flyweight interim titlist Yodmongkol Vor Saengthep (34-2, 20 knockouts), which had been postponed until Oct. 31 from its original date of Oct. 17, due to an injury in his left arm.

The injury was described by Reveco’s spokesperson as “a sort of muscular fatigue, almost a tear” in Reveco’s left biceps.

Prior to that, Reveco (34-1-0, 18 KO) had suffered a small cut on his right eyebrow during a sparring session in the last week of September, and decided that the cut was not bad enough to call off the bout, but rather to postpone it just a few days. The cut allegedly required five stitches.

Promoter Osvaldo Rivero indicated that the rest of the card will take place regardless of Reveco’s absence, with local female standout Yesica Marcos defending her WBA super bantamweight title on against Mexico’s Estrella Valverde.