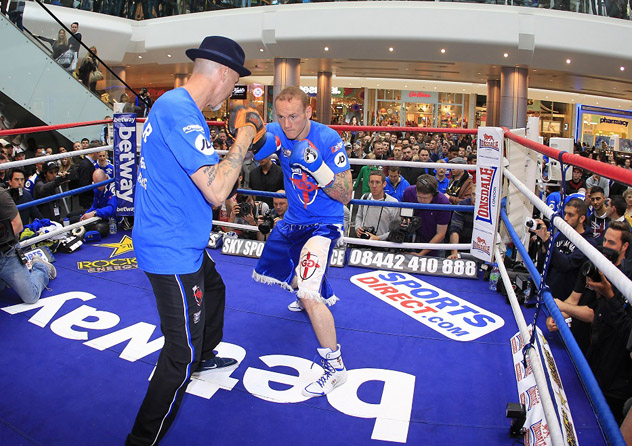 Groves (20-2, 15 knockouts) gained his first win in over a year with last month’s unanimous decision over Christopher Rebrasse in a WBC eliminator at Wembley Arena in London.

“We’re pleased to get George out on another big UK show. He will face a tough test against Douglin and cannot afford to look past him,” said Nisse Sauerland, Groves’ promoter. “George will need to approach this as if it were a world title fight or could risk losing the WBC mandatory position.”

In victory over Rebrasse, Groves, 26, recovered from back-to-back losses in the ninth and eighth rounds to IBF titleholder Carl Froch in November and May, respectively.

“I’m looking forward to getting back in the ring. This is a chance for me to impress on a big card. I plan to steal the show,” said Groves, who became the the mandatory challenger to beltholder Anthony Dirrell.

“It’s a calculated risk. Lose this fight and I lose my shot at Dirrell. But I want to stay active. I want to box as regularly as possible and I’m confident I can get the job done.”

Known as “Momma’s Boy” because his mother is his trainer, Douglin (17-3, 10 KOs) has won three consecutive bouts, two by knockout, since losing back-to-back by fifth-round knockout to Jermell Charlo in June 2012 and unanimous decision to Jose Angel Rodriguez in January 2013.

Douglin, 26, won his last fight in June by unanimous decision over Charles Whittaker.

“This is a big opportunity for me. Win this fight and I’m a step closer to realizing my dream of becoming world champion,” said Douglin.

“Groves is a great boxer. It will be a tough fight but I’m ready to cause an upset. I’m coming to fight my fight and to beat Groves on his home turf.”

On a card to be broadcast by Sky Sports on pay-per-view in the United Kingdom, Bellew is 6-1-1 with four knockouts since losing by majority decision to then-WBO titleholder Cleverly in October 2011 at Echo Arena.

Cleverly, 27, has also excelled since rising into the cruiserweight division, having scored knockout victories over Shawn Corbin in May and Alejandro Emilio Valori in July. In victory, Cleverly bounced back from a fourth-round knockout loss to Sergey Kovalev, who took his WBO 175-pound title in Aug. 2013.