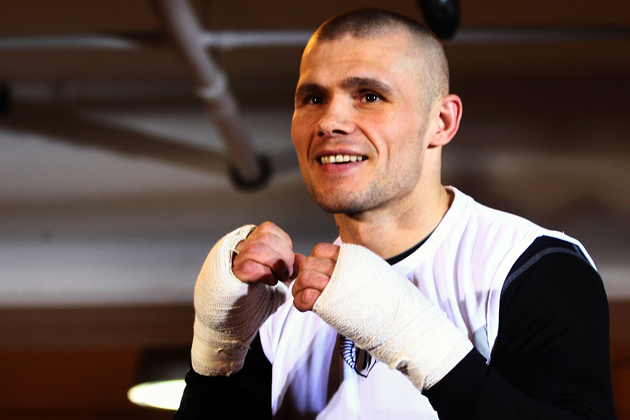 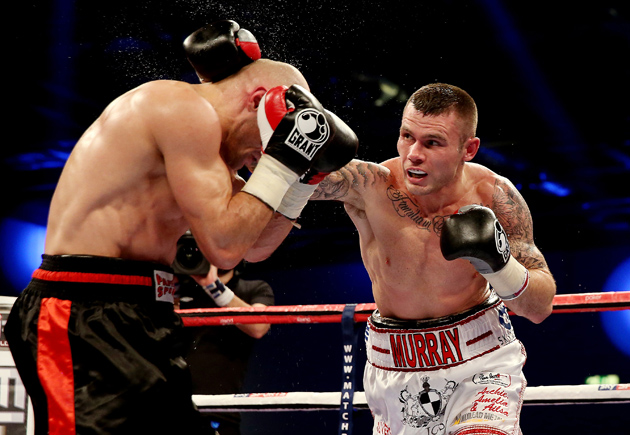 Martin Murray (right) in action with Sergey Khomitsky during their middleweight bout at ExCel on Dec. 14, 2013 in London, England. Photo by Scott Heavey/Getty Images

This Saturday night British middleweight contender Martin Murray faces Domenico Spada, in Monte Carlo, and victory over the experienced Italian could lead him to a third world title shot in early 2015.

Earlier this year Murray (28-1-1, 12 knockouts) was snapped up by South Africa-based promotional group Golden Gloves who secured two fights, in as many months, for their new attraction. The overmatched Ishmael Tetteh retired after six, in April, and then Murray outclassed the durable Max Bursak over 12 rounds.

Spada might be capable of asking one or two questions of Murray, although the talented box fighter from St. Helens, England isn’t losing any sleep over it.

“Spada is a standard, tough, textbook boxer,” said Murray, who is THE RING’s No. 6-rated middleweight. “It’s a new challenge, but one that I’ll be prepared for. He’s mixed in decent company, but hasn’t faced anyone like me and I’m willing to prove that on fight night.

“I’ve shed the rust and I’m coming into this one with real momentum. I’ve benefitted from being active and camp has gone extremely well, so I expect to win and win in style. Spada is going to bring an awkward game, but I’m looking forward to getting the job done.”

The middleweight division has gone through a real shake up since Murray contested for two world titles. Felix Sturm, who drew with the Englishman in 2011, is on a steep descent and the injury prone Sergio Martinez, who won a controversial decision over Murray, is most probably finished as a world class operator following a one-sided defeat to Miguel Cotto.

“The Martinez fight was a great opportunity for Cotto to collect another title at a new weight class, but he’s never (been) a middleweight,” said Murray. “The guy is elite level and could fill arenas doing a six rounder, but my feeling is that he’ll give up the WBC belt. A guy like Cotto doesn’t need a title and he’s just putting the finishing touches on his legacy.

“I have heard that he could take on Canelo Alvarez at a catch weight, which is ridiculous and prevents genuine middleweights from getting opportunities. It’s just a part of boxing and, again, that would be orchestrated to give Canelo the chance at being a two-weight world champion.”

In December Andy Lee and Matt Korobov collide for the vacant WBO middleweight title, which was given up recently by Peter Quillin. Murray respects Lee’s skills and gives the affable Irish southpaw a real chance against the unbeaten Russian.

“I rate Andy Lee and always have,” said Murray, in earnest. “He was almost forgotten about when fans were talking about me, Darren Barker and Matthew Macklin but he deserved to be included. He was ignored because he was based in America and that’s why I stuck up for him. Having said that, I know I beat Andy Lee if we meet in the future.

“Korobov was good in the amateurs and has done everything asked of him in the pros. My only complaint is that he’s been neglecting his boxing skills recently and is loading up a lot. I’ve watched him for several years and his style seems to have changed. Korobov is still a top fighter but Andy Lee definitely has a shot in this one.”

One of the biggest surprises at 160 pounds was former undisputed champ Jermain Taylor regaining the IBF portion of the title from Sam Soliman this month. Due to Taylor’s notorious medical history and some disturbing pre-fight behavior, the bout was widely condemned by the boxing fraternity.

Murray said, “A lot of people were concerned about Taylor competing, given the fact that he suffered a brain bleed a few years ago. It was just a horrible match-up in general and those two fighting for a world title was, frankly, disappointing. I would beat the pair of them, but what can you do?

“We offered Soliman very good money to come to Monte Carlo and he declined. Now Taylor holds the IBF title and I doubt that belt comes out of America for the foreseeable future. Al Haymon manages Taylor and he is enormously influential in boxing. He also has Quillin and Danny Jacobs so, if anything, he’ll line up Taylor with one of his own fighters.”

RingTV.com’s conversation with Martin Murray took place just prior to Gennady Golovkin’s second-round demolition of Marco Antonio Rubio on Saturday. Murray would be happy to accept a fight with any middleweight carrying a belt and he certainly didn’t expect to see the WBA version change hands in Carson, California.

“Rubio is tough but I don’t expect him to put a dent in Golovkin,” said Murray who, like every other 160-pound fighter, respects “GGG” immensely. “From a personal point of view, I hope he takes Golovkin past the midway point because I want to see what he has late in a fight. The thing is I expected Daniel Geale to do that and we know what happened there.

When asked what would follow a win over Domenico Spada this Saturday night the response from Murray was to be expected.

“My main focus is Spada and then I’ll leave everything up to Golden Gloves. I know they’re working hard to open doors and, sooner or later, I will be involved in a big fight against one of these world champions.”

Based on Murray’s height (6-feet) and the myriad of British talent at 168 pounds, this reporter thought it appropriate to ask if a move to super middleweight is imminent. Carl Froch, George Groves and James DeGale all reside on or around world level and Callum Smith is making up the rear. Murray’s inclusion in that mix would be very interesting indeed.

“My trainer (Oliver Harrison) and I have always said that I’ll be even better as a super middleweight than a middleweight,” said Murray. “We’ve discussed that at length. The problem is that my opportunities are at middleweight at the moment, so I need to push for something to happen at 160 pounds. If I move up now then I’m just rebuilding in a new weight division.

“If I got an offer of a huge fight at super middleweight, against someone like Froch, or one of the other champions then I’d take it with both hands. Without that type of scenario then I’d be going backwards. As soon as all my opportunities are exhausted at middleweight then I’ll definitely consider the step up.”