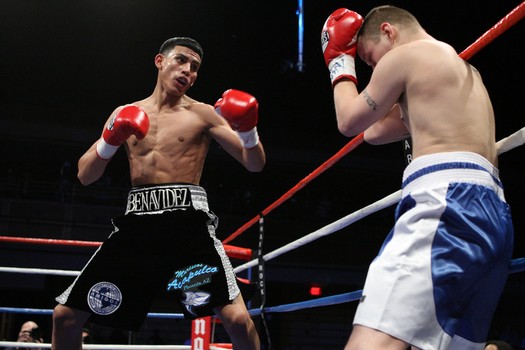 Junior welterweight Jose Benavidez Jr. insists it is “the right time to go into a big fight” with Mauricio Herrera on Dec. 13 at the StubHub Center in Carson, Calif., even hoping to have benefited from sparring with Manny Pacquiao.

Benavidez (21-0, 15 knockouts), 22, will be in his fourth fight of the year against the seasoned Herrera (21-4, 7 KOs) in support of a main event featuring Tim Bradley against Diego Chaves on HBO.

Coming off a majority decision victory over former title challenger Johan Perez in July to rebound from a disputed majority decision loss to RING champion Danny Garcia in March, Herrera, 34, has touted his experience over Benavidez, who has gone eight rounds just once and no more than six in any other bout.

“This is the right time for me to go into a big fight,” said Benavidez, who scored a first-round knockout of Henry Auraad in his last fight in July. “I promise I will win and get the title and bring it home to Phoenix.”

Herrera even dismissed any notion of a height disadvantage, standing 5-foot-7 and-a-half compared to the listed 5-foot-11 for Benavidez, whose past includes sparring with Pacquiao.

“I’ve been around great fighters all of my life. So while training at Wild Card, I got into the ring to spar with Manny Pacquiao. That was a fantastic experience,” said Benavidez.

“Now it’s time to step up and take on Herrera. I was first offered a 10-round fight but I said no. I want to go the full 12 rounds and get that [interim] title belt from him.”