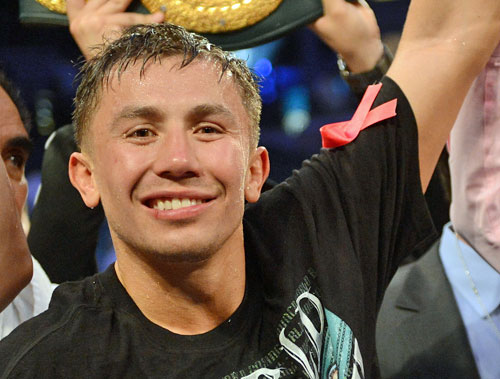 Gennady Golovkin: The outcome of Golovkin’s victory over Marco Antonio Rubio on Saturday at StubHub Center was predictable, although many believed the tough Mexican would last more than one-plus rounds. The surprise was the stir Golovkin caused in Los Angeles. Tickets sold out almost immediately after they went on sale and standing-room only areas were added, which produced a record crowd of 9,323 at the outdoor tennis arena. The fans in attendance were mostly of Mexican ancestry but seemed to be rooting for Golovkin over their man. They know a special fighter when they see one. And, of course, the gifted Kazakstani didn’t disappoint those who had come to see another brutal knockout. He landed a right that hurt Rubio and, moments later, a left hook sent him crashing to the canvas and ended the night. It was his 18th consecutive knockout, the kind of streak that is so intriguing to his growing number of followers. Afterward, Golovkin was typically humble, another trait the Mexicans and others like about him. He said a few words in Spanish to acknowledge the fans. “Buenos noches,” he said. And, several times, “Muchas gracias.” He knows the most important segment of the boxing market when he sees it. In the end, Golovkin-Rubio wasn’t much of a fight. But it sure was fun.

Who’s next for Golovkin? Golovkin (31-0, 28 knockouts) apparently will fight next in February in Monaco, which is part of a plan to build him as an international brand. A likely opponent is Martin Murray if Murray beats Domenico Spada on Saturday in Monte Carlo, although that has not been settled. The big question is what comes after that? Tom Loeffler of K2 Promotions, who guides Golovkin’s career, said the plans for February could change if Julio Cesar Chavez Jr. agrees to fight GGG around that time. Bob Arum, Chavez’s promoter, suggested to Loeffler that the matchup is possible but it doesn’t seem likely, at least not so soon. So who else? Golovkin, the WBA middleweight titleholder, would like to fight RING and WBC champ Miguel Cotto for obvious reasons: The matchup would be a big money-maker and unify titles. The problem is that Cotto could opt to fight Canelo Alvarez in May in an even bigger promotion – and easier fight – instead. Perhaps Golovkin could face the winner of Cotto-Alvarez in September. Another possibility is Carl Froch. And, if you like longshots, Jermain Taylor’s name came up. Rumors indicate the newly crowned IBF titleholder has suddenly become a possible opponent for Floyd Mayweather Jr. In the meantime, Golovkin can only say that he wants to face the best fighters around his weight. That’s all everyone wants.

Nicholas Walters: Many experts predicted Walters would beat Nonito Donaire on the Golovkin-Rubio card. Donaire seemed to be in decline and the Jamaican was on a terrific run of dominating performances, although he had never beaten anyone of Donaire’s stature. The fact he did so in such sensational fashion – a sixth-round knockout – was a big step in his career. Walters was hurt in the final seconds of the second round but stormed back to cut and put Donaire down in third and dominate the rest of the way. The end came as a result of a concussive right to the head, from which Donaire couldn’t recover, giving Walters (25-0, 21 KOs) the WBA featherweight title and a tremendous amount of respect from the boxing community. Indeed, that’s the kind of statement that fascinates fans and opens the eyes of television executives who are always looking for big attractions. And, unlike Golovkin, there are a number of good possible opponents. A slugfest against Jhonny Gonzalez would be fun as would matchups with fellow Top Rank fighters Vasyl Lomachenko and Evgeny Gradovich. Abner Mares is among other possibilities. Bottom line: It’s going to be a fun ride.

Nonito Donaire: The irony in the aftermath of Donaire’s crushing loss to Walters is that he seemed to find previously missing passion in the first few rounds of the fight. He fought effectively and with purpose, something we hadn’t really seen in recent fights. Then Walters, too big, too strong and too good for him, hurt the Filipino-American and all that changed. Donaire continued to try but his body language changed; he clearly became prey struggling to survive and ultimately failed. I think he demonstrated in the first few rounds that he can still fight at a high level. The question is: Does he want to? He said something revealing after the fight: “I can’t compete with guys like Walters.” The problem is that he must compete against the best in the world to remain relevant. Otherwise, what’s the point? Donaire is fighting and talking like a boxer whose heart is no longer in the game. Thus, retirement probably isn’t too far off. I’ll remember him as a class act. He said after the fight on Saturday: “He beat the sÔÇöt out of me.” How many fighters are that honest? And his series of thrilling knockouts earned him both fans and recognition as one of the best fighters in the world. How many fighters can claim that?

Rubio (59-7-1, 51 KOs) had a rough few days. He failed to make weight by 1.8 pounds and, because he was so depleted, he didn’t even try a second time. That cost him $100,000 of his $450,000 purse, which had to be as painful as Golovkin’s punches. And most observers figured he’d last at least four or five rounds, as he was known for his toughness and hadn’t been stopped in years. Instead, he survived only 4 minutes, 19 seconds. I guess $350,000 will help ease the pain somewhat. ÔÇª Edwin Rodriguez (25-1, 16 KOs) defeated light-punching Azea Agustama (17-2, 9 KOs) by a near-shutout decision on the Golovkin-Rubio card, Rodriguez’s first fight as a light heavyweight. He was coming off a one-sided loss to Andre Ward in November. ÔÇª Former cruiserweight titleholder Steve Cunningham (28-6, 13 KOs) stopped Natu Vasinia (10-1, 8 KOs) in seven rounds on Saturday in Philadelphia. The victory was Cunningham’s third in a row, keeping him in the mix of viable heavyweights.