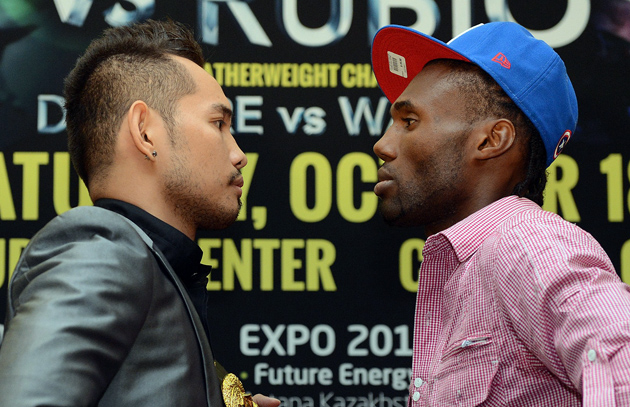 RingTV.com has a live round-by-round update of tonight’s sixth-round technical knockout by unbeaten RING No. 3-rated featherweight Nicholas Walters over RING No. 4-rated Nonito Donaire, who was floored twice and dethroned as WBA beltholder at StubHub Center in Carson, Calif.

Donaire rose on unsteady legs to be the count, but referee Raul Caiz had seen enough and waved an end to the bout.

Walters, 28, had an overall advantage in punches landed (85-to-40), power shots (41-to-36) and jabs (44-to-4) in the bout, representing his fifth consecutive stoppage victory. Donaire was bleeding from cuts over both eyes.

Donaire, 31, had last been action for a fifth-round technical decision that dethroned Simpiwe Vetyeka as WBA beltholder in May, scoring a fourth-round knockdown en route to winning his sixth major title (as well one RING championship) in a fourth weight class.

On the Donaire-Vetyeka undercard, Walters scored a fifth-round stoppage of two-division titleholder Vic Darchinyan, whom he dropped once in the second round and twice in the fifth.

Donaire has twice beaten Darchinyan, stopping him in the fifth round as flyweights in July 2007 and again for a come-from-behind ninth-round knockout in November, one bout prior to Darchinyan’s loss to Walters.

Fighters have both been introduced by ring announcer Michael Buffer.