Gennady Golovkin: the making of a Los Angeles boxing attraction 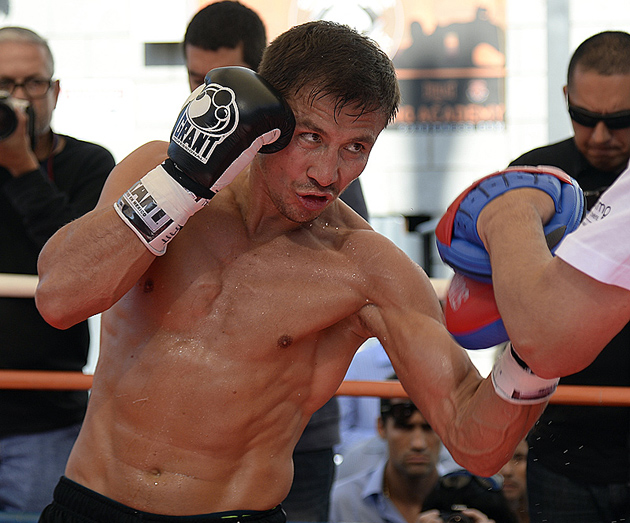 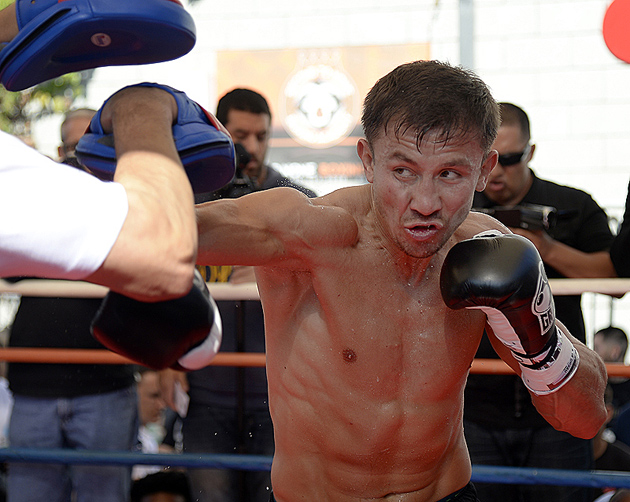 Gennady Golovkin is known for his punching power in the ring but the undefeated WBA middleweight titleholder may prove to be a box-office powerhouse in Southern California. Photo by Gene Blevins-Hoganphotos

The StubHub Center in Carson, California, where the HBO-televised middleweight showdown will take place, will be packed beyond capacity by the time Golovkin and Rubio step into the ring. The event, which is being called “Mexican Style,” is such a hot ticket among Southern California fight fans that the 8,000-seat outdoor arena has been expanded three times to accommodate the demand.

Mexican Style, which is supported by an excellent featherweight matchup between Nonito Donarie and Nicholas Walters, officially sold out one month ago, according to Tom Loeffler of K2 Promotions, which promotes Golovkin.

Loeffler had StubHub (formerly known as Home Depot Center) add bleachers around the arena, which made 384 seats available. They sold fast, which was a pleasant surprise to Loeffler. It should be noted that Golovkin, the undefeated WBA titleholder who is viewed as the main attraction of the event, is making his California debut on Saturday.

“When we made the fight we knew it would sell well and that it would likely sellout but we weren’t expecting it to be sold out a month in advance,” he told RingTV.com at the Golovkin-Rubio media workout on Wednesday in Santa Monica.

So what was it about this event that drove fans of the greater Los Angeles area crazy?

“I think it was great chemistry between Golovkin’s popularity and a well-known and respected opponent,” Loeffler said. “We have Golovkin, who is bringing in new fans, and a proven veteran like Rubio, who lets hardcore fans know they’re going to get a real fight. Fans just reacted to it.”

They are still reacting to it.

Once the bleacher seats were bought up, 280 standing-room tickets were put on sale. Fans obviously don’t mind not having an actual seat for this show because those tickets also sold quickly.

On Tuesday, K2 released another 288 tickets for the concourse level around the arena. Needless to say, there will be more than 8,000 fans on hand to witness Golovkin-Rubio.

“There will be 1,000 more fans at this fight than there was for any other event ever held at StubHub,” Loeffler said. “We hit a grand slam with this one, a clear sellout. We couldn’t have hoped for a better a result.”

Loeffler, a successful boxing manager in the 1990s who entered the promotional part of the game with the Klitschko brothers 10 years ago, is understandably proud of the accomplishment.

Golovkin (30-0, 27 knockouts), a 2004 Olympic silver medalist from Kazakhstan, was largely unknown in the U.S. when Loeffler signed him to K2 in early 2012. The powerful technician, 29 at the time, lived in Germany where he turned pro in 2006 and fought almost exclusively until 2009.

Golovkin had begun training with Abel Sanchez in Big Bear Lake, California in 2010, but fighting in America and making a name among U.S. fans remained a dream for the former amateur star.

However, starting with his U.S. debut against Gregorz Proksa in September 2012, Golovkin – “GGG” to his ever-growing legion of hardcore fans – quickly established his now-fearsome reputation by brutally stopping a string of solid fighters, with all of his fights in America showcased on HBO.

All of Golovkin’s previous HBO appearances took place in the Northeast, including three bouts in Madison Square Garden. Golovkin’s last bout, an impressive third-round TKO of former IBF/WBA titleholder Daniel Geale on July 26, took place in the main arena of the storied New York City venue, where around 8,500 fans showed up to witness his brand of power and ring generalship.

What could explain the high level of anticipation?

It certainly doesn’t hurt that Rubio, a puncher in his own right with 51 knockouts in 59 victories, is a Mexican national. However, it was Golovkin, not Rubio, who was mobbed by Mexican fans at the kick-off press conference held at El Paseo restaurant in the historic Olvera Street area of Los Angeles.

There’s something about Golovkin’s clean-cut, humble out-of-ring demeanor and his seek-and-destroy style inside the ring that resonates with the same fans that once idolized Julio Cesar Chavez Sr., as well as the children of those fans.

There’s a “Mexican Style” rap video that has taken off since it was posted on Youtube.com last week. The rap – which was written and performed Mario Ruiz and Omar Cruz, two young Mexican-American Los Angeles residents – isn’t about Rubio, or Julio Cesar Chavez Jr., or Canelo Alvarez. It’s about Golovkin.

“All those stories and features and videos that came from the many media lunches we’ve done in Southern California made Golovkin a Los Angeles fighter before he ever fought here,” Bahrmasel said. “I’ll bet we’ve done a dozen [media lunches] since 2012.”

With Golvokin training in Big Bear and Loeffler’s office based in Santa Monica it made sense for K2 to hold press conferences – usually informal lunches at Le Petit Greek in Los Angeles, Traktir Russian restaurant in West Hollywood, the Marriott hotel in Manhattan Beach or the Radisson hotel at LAX – before Team GGG broke camp to leave for the next fight. Media lunches, which were attended by beat writers from the Los Angeles Times, Daily News, the Associated Press, and most of the major boxing websites, were even held when Golovkin fought outside of the U.S. and off HBO.

“We always had him in front of the media here,” said Loeffler, who also set up Golovkin appearances at major Los Angeles entertainment events, such as the Emmy Awards and the L.A. Kings season opener at Staples Center. “That laid the foundation for this response.”

Some have assumed that Golovkin will fight exclusively in Southern California going forward, given the response to Saturday’s fight. Not so, says Loeffler.

“It depends on the opponent,” he said. “If it’s Miguel Cotto, the East Coast makes sense. If it’s Canelo or Chavez Jr., it’s the going to be on the West Coast.”

Loeffler added that Golovkin, who has fought twice in Monaco since his U.S. debut, will continue to fight overseas.

“There’s always going to be an international fight because Gennady wants to fight three and four times a year and HBO can’t accommodate his activity,” he said. “Golovkin has fans in other countries. Saturday’s fight will be televised live in Germany on Sat-1, in the UK on Sky Sports, in Russia on Russia 2 and on three networks in Kazakhstan.

“Plus, he’s got potential opponents in other countries. There’s Carl Froch and Martin Murray in Britain. There’s Arthur Abraham or the winner of Abraham versus the winner of [Robert] Stieglitz-[Felix] Sturm in Germany. There’s Mikkel Kessler in Denmark.”

In other words, there’s more than enough GGG to go around.