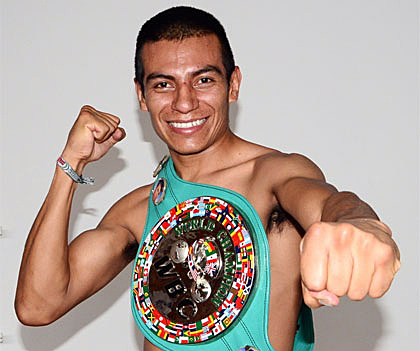 Do not judge a book by its cover.

Robinson Castellanos, who had been stopped in his previous bout almost eight months ago, carried 10 career losses into his fight against undefeated Ronny Rios on Friday.

He seemed like a sufficient test for Rios, but one where the Mexican-American contender would be able to get through to get the victory.

That was until the second round.

Castellanos dropped Rios in Round 2 of their “Golden Boy Live!” main event televised on Fox Sports 1, and finished him off three rounds later for an upset victory at Fantasy Springs Resort Casino in Indio, California.

Within the past few years, Rios shed the prospect label, landing into contender status with victories over Rico Ramos and, most recently, Andrew Cancio on April 14.

He told RingTV.com this week he wanted to fight Castellanos, who was stopped in his last bout on Feb. 15 at the hands of Rene Alvarado. Prior to the loss, Castellanos had won 11 bouts in a row, including victories over Celestino Caballero and Alberto Garza.

As predicted by Rios, Castellanos took the initiative from the opening bell, pressing the attack and trying to force Rios to fight defensively. About midway through the first round, a cut appeared along Castellanos’ left eye. Referee Ray Corona ruled the cut was from an accidental clash of heads, although replays showed it was likely from an overhand right from Rios.

Midway through the second round, a combination to the head noticeably hurt Rios. Moments later, a garage of punches dropped Rios to the canvas. After getting up, Rios tried to fight back, but would have done himself favors had he held on to Castellanos. Rios was able to make it out of the round.

While Rios tried to fight back instinctively or tried to score from the outside during the next couple of rounds. Castellanos repeatedly landed to the head with awkward right hands and the occasional hook.

At the end of the fourth round, a barrage of punches from Castellanos almost dropped Rios to the canvas. Rios was hurt as he walked back to the corner, to the point a ringside physician had to check on Rios after the round ended.

Rios went out for the fifth, but Castellanos greeted him with a vicious wave of punches that hurt him again. Referee Ray Corona saw enough and waved the fight over at 11 seconds.

After the fight, Frank Espinoza, Rios’ manager, announced on the Espinoza Boxing Twitter account that Rios was taken to a nearby hospital for observation.

Orozco won a 10-round unanimous decision over Martin Honorio in his last bout on May 15. A former world title-holder, Forbes entered the ring on Friday night having lost five bouts in a row.

As the bout progressed, Orozco committed himself to attacking the body with more regularity. He was able to get himself within punching range to land to the head as well, but would get countered by Forbes to the head on occasion.

While there were times when Orozco may have presses the action to try and get the knockout win, he was content to box his way to a decision.

All three judges scored the bout 80-72 in favor of Forbes.

After an even first round, it was all De La Hoya for the rest of the fight. With his cousin Oscar De La Hoya watching from ringside, De La Hoya landed the more telling blows throughout the first, particularly with the right hand to the head. Ruiz attempted to hold his ground, but was unable to withstand the more pinpoint accuracy of De La Hoya.

There were points during the last two rounds of the fight where De La Hoya landed an abundant amount of punishing rights and lefts to the head. Referee Jerry Cantu kept a close eye on Ruiz, but Ruiz was able to fight back, although outgunned and made it to the final bell.

All three judges scored the bout 60-54 in favor of De La Hoya.