Bob Arum: Ramirez ‘would mop the floor with’ Chavez Jr. 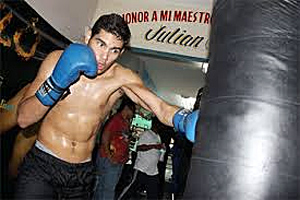 Each of the fighters is a resident of Sinaloa, Mexico, separated by approximately two hours driving distance. Ramirez, 23, is from Mazatl├ín, and Chavez, 28, from Culiacan.

So a fight between Chavez Jr. and Ramirez would be huge and Top Rank Promotions CEO Bob Arum said he would be “happy” to make it happen.

“You know, I would love to fight Julio Cesar Chavez Jr. In that fight, I think that you would see a war,” said Ramirez of Chavez Jr., a former WBC middleweight titleholder. “I think that our styles are perfect for each other and no one would be disappointed in it. I think that the guy who would win it is going to be the guy who is better prepared and in better shape. That would be 12 rounds of hell for the both of us and you know I’m going to win.”

Arum is much less subtle than Ramirez regarding whom he believes would emerge victorious.

“They come from the same province in Mexico,” said Arum of Ramirez and Chavez, the latter of whom has competed recently as a super middleweight. “Chavez, in a million years, wouldn’t fight this guy. Ramirez would mop the floor with him. You can put that on the record.”

Chavez (48-1-1, 32 KOs), meanwhile, is coming off a 168-pound unanimous decision over Bryan Vera in March, having won their previous bout by controversial unanimous decision in September 2013. Chavez-Vera I happened in California at a 173-pound catchweight because Chavez was not able to make the originally contracted limit.

Although he has been at odds with Chavez and the boxer’s manager, Billy Keane, over contractual issues, Arum insists that his contract is valid.

“Our position is and our lawyers tell us that we still have one more fight with [Chavez],” said Arum, “and I’m happy to make that one fight be against Ramirez.”