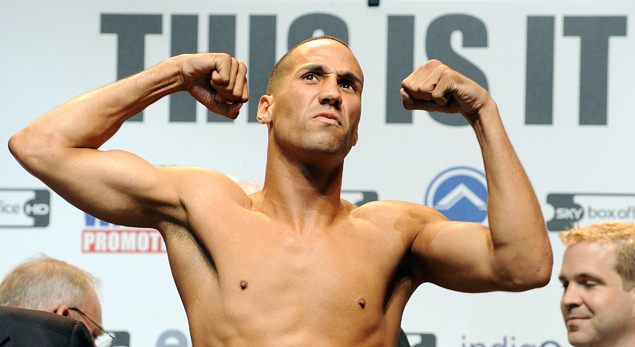 DeGale (19-1, 13 knockouts), a 2008 Olympic gold medalist from Great Britain, has won nine straight fights, four of them by knockout, since losing a majority decision to George Groves in May 2011. In his last fight in May, the 28-year-old contender stopped previously undefeated Brandon Gonzales in four rounds.

DeGale-Periban will happen on the undercard of a cruiserweight rematch between former light heavyweight titleholder Nathan Cleverly (28-1, 14 KOs) and Tony Bellew (22-2, 14 KOs).

“This is like a second final eliminator as if I don’t beat him, I don’t box for a world title,” DeGale said in a press release. His fight with Gonzales was an IBF eliminator to face beltholder Carl Froch. “It’s a good test. He took Sakio Bika close, and he had J’Leon Love all over the place, and should have finished him off. He’s not a typical Mexican. He can box on the back foot, and he’s going to come to fight.

“That will bring out the best in me. I am looking forward to it. It’s on a great show, so roll on Nov. 22. I didn’t want an eight-round keep busy fight. I wanted a name that will impress people when I win in style, and it will set up a fight with Carl. It’s not about me fighting Carl though, it’s about me getting my shot at the world title and making history by becoming the first British gold medallist to win a world title.”

The 30-year-old Periban (20-2, 13 KOs) is coming off a unanimous decision loss in May to J’Leon Love that had followed a draw with Badou Jack in September 2013 and a majority decision loss to Sakio Bika for the vacant WBC belt in June 2013.

“I appreciate this opportunity and will be putting in a huge effort into training, to win and to put on a great show in the UK,” said Periban. “I lost a close decision to Bika for the WBC title, and I want another shot. When I beat DeGale, I hope for a shot at Carl Froch, but first, I am focused on Nov. 22 and taking him out.”

Also on the card will be bantamweight Jamie McDonnell against Walberto Ramos, the winner of which could be in line to face WBO titleholder Tomoki Kameda. In another bout, super middleweight Callum Smith will take on Nikola Sjekloca in an eliminator for the right to challenge WBC titleholder Anthony Dirrell.