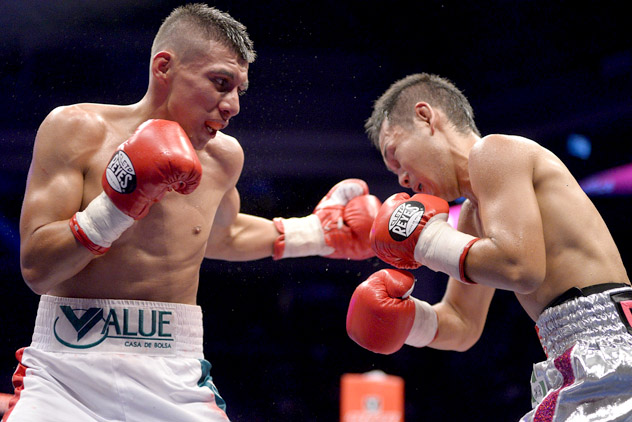 THE RING’s No. 2-rated strawweight Francisco Rodriguez will vacate his IBF belt and rise into the junior flyweight division, according to Sean Gibbons of Zanfer Promotions.

Rodriguez dethroned Katsunari Takayama by decision for the IBF belt last month in a 12-round battle that is widely considered a Fight of the Year candidate. The 21-year-old Mexican took the WBO’s belt from previously unbeaten Merlito Sabillo in March.

Rodriguez’s camp notified the IBF of the situation on Oct. 1, according to an e-mail from the organization’s Championships Chairman Lindsey Tucker.

“Francisco Rodriguez has decided, basically, since he was struggling to make 105 pounds, he’s looking to make his mark at the higher weight now,” said Sean Gibbons of Zanfer Promotions.

“Rodriguez has not confirmed his intention of vacating the WBO belt, but we do understand that he is having trouble making weight, and that he is planning on moving up,” said Jose Izquierdo, general secretary of the WBO.

“As a matter of fact, he will be fighting a 10-rounder in the Philippines coming up at 108, and then, I guess that we’ll discuss his plans after that. But it looks like he’ll move up to 108, and perhaps campaign at 108.”

Sauerland Event has entered into an agreement with a new German television partner in SAT.1, which will broadcast its fighters starting in 2015, according to the promotional company’s website.

The move was announced on Thursday in Berlin, Germany, at a press conference at the Hotel Adlon,

“We are very happy to have found a new and accomplished television partner for the German market.There are exciting times ahead,” said Kalle Sauerland.

“This was one of the major factors in our negotiations with SAT.1. We not only want to show the best, but also our young fighters on their way to the top. That is and will always be our concept.”

The new partnership with SAT.1 represents a break for Team Sauerland with current broadcaster ARD, whose contract will soon expire.

“We want to thank everybody at ARD for a long and successful collaboration,” said Sauerland. “This was not an easy step as ARD wants to continue to broadcast boxing. But the show must go on, and we are excited to ring in a new era with ProSiebenSat.1. Boxing in Germany will be bigger than ever.”

Sauerland has worked with fighters such as RING cruiserweight champion Yoan Pablo Hernandez and WBO super middleweight titleholder Arthur Abraham as well as Juergen Braehmer. Sauerland also lists former titleholder Mikkel Kessler of Denmark and English boxers George Groves and David Price among its roster of boxers, although WBO cruiserweight beltholder Marco Huck has announced that he is severing ties to Sauerland.

“This collaboration is a milestone for boxing in Germany. With this deal, SAT.1 will become the leading television channel for boxing in Germany,” said Karajica. “Together with Team Sauerland, Felix Sturm and SES Boxing we will stage superb events, which will set a new standard.”

HASSAN N’DAM ON JERMAIN TAYLOR: ‘HE IS REQUIRED TO FIGHT ME’

During a unanimous decision over Curtis Stevens in an IBF eliminator bout on Oct. 1, N’Dam had scored an eighth-round knockdown to secure a mandatory shot at the winner of Taylor-Soliman.

“I’m on the quest to become world champion again. The first big step was my fight against Curtis Stevens,” said N’Dam, 30, a winner of four straight fights since falling by unanimous decision to then-WBO beltholder Peter Quillin, who floored him six times in October 2012.

“I am now the No. 1 mandatory challenger in the IBF, and Jermain Taylor is the new champion, so he is required to fight me. So that is the next step in my quest. I look forward to fighting him. Jermain Taylor is a good boxer, a respectable boxer. I’m really happy to fight him. It’s going to be an exciting fight. After Jermain Taylor, my goal is to unify all the other titles.”

Also at ringside was Quillin, 31, who vacated his belt last month rather than face Korobov. Quillin, like Taylor, is advised by Al Haymon, and is, no doubt, seeking to fight Taylor.