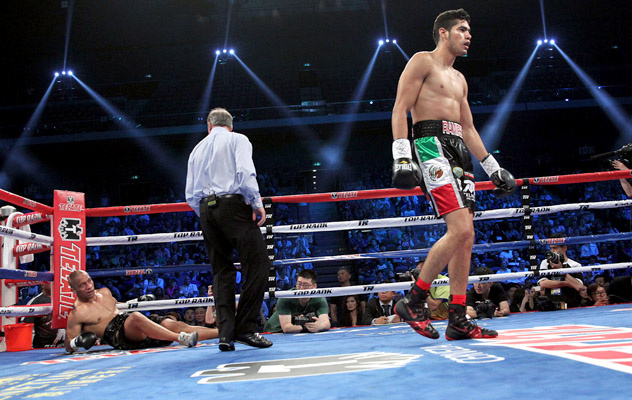 July 19, 2014: Gilberto Ramirez leaves a fallen Junior Talipeau behind on his way to a first-round stoppage in Macao, China. Photo by Chris Farina/Top Rank Promotions.

Super middleweight Gilberto Ramirez truly believes he is the next big thing to come out of Mexico.

A southpaw whose idol is former champion Julio Cesar Chavez Sr., Ramirez (29-0, 23 knockouts), 23, will get some perspective on his appeal and drawing power against rugged Fulgencio Zuniga (27-9-1, 24 KOs) at the Alamodome in San Antonio, Texas on HBO Latino.

Ramirez will be walking the path of Chavez Sr. at the Alamodome, where his hero battled to a disputed draw with Pernell Whitaker in September 1993.

“Julio Cesar Chavez Sr. is my idol,” said Ramirez, who has become known for his vicious body attack. “I’ve always tried to follow what Chavez has done in his fights. He just always attacked the body, so I’ve tried to do the same thing and to follow in his footsteps.”

In addition, Alvarez drew nearly 40,000 to the Alamodome in his lone appearance there, represented by a unanimous decision over previously unbeaten Austin Trout in April 2013.

Fans in San Antonio have also embraced Chavez Jr., whose fights at the Alamodome are comprised of unanimous decisions over John Duddy, Marco Antonio Rubio and Brian Vera.

“I think that my hunger is greater those two guys’ hunger,” said Ramirez. “I think that I’m capable of doing better than they have so far and I think that I will be better in the future. I know that I can be a big star.”

Ramirez shared his thoughts with RingTV.com on Thursday in the following Q&A:

RingTV.com: Can you discuss your theory about body punching?

Gilberto Ramirez: You know, in the gym, when I first started out, they always said, “When you hurt the body, then the head’s going to come down with it.” So that’s been my motto. I know that, eventually, the body attack is going to break them down. That’s why I do it, so it’s all been a result of my work in the gym. That’s something that I was taught to emphasize ever since I was little.

RingTV.com: Is Chavez Sr. the fighter whose body-punching style you have idolized or you emulate?

GR: Since when I saw Julio Cesar Chavez Sr., who is my idol, go to work on the body, I have always liked the body work that he has done. He was always going to the body. So, like I said, Julio Cesar Chavez Sr. is my idol, so I’ve always tried to follow what he’s done in his fights. He just always attacked the body, so I’ve tried to do the same thing and to follow in his footsteps.

RingTV.com: Do you aspire to similar status as that of Canelo Alvarez and Julio Cesar Chavez Jr. in Mexico?

I think that I’m capable of doing much better than they have so far and and I think that I will be better in the future. I know that I can be a big star. I think that I have everything. I know what I can be but I have to work at it. You have to put the work in and that’s what I’m doing.

RingTV.com: What does it mean to be on HBO Latino as a headliner in San Antonio?

GR: This is a great opportunity, especially coming into a town where there’s a lot of boxing history here. I know that Julio Cesar Chavez Sr. fought here and it’s just a great opportunity for me. But you have to go in there and do the job. You have to impress and that’s what I’m going to do. I want to be known as one of the best in my division and as one of the best boxers in the world.

So this is giving me the opportunity to put myself out there. This is the kind of exposure that I need. I’m very happy with everyone on my team and with everyone who has been behind me and gotten me to this point.

RingTV.com: Do you need to knock out Zuniga to satisfy your goal?

GR: I’m preparing myself the best that I can and I’m working very hard in the gym. I’m going to go in there and try to dominate. I want to dominate this guy. If the knockout comes, great but if it doesn’t, I’m just looking to deliver a dominant performance and for everyone to enjoy the fight. I’m going to work hard but I’m not going to pressure myself and say that I’ve got to knock everybody out.

If it comes, then it comes but if it doesn’t, then I just want to be impressive. You hope that you get a good crowd out there and that you have support. That’s what I’m looking for. I think that it’s going to be a great show.

I think that you’re going to see something special. I know that we’re going to have a lot of fans there. I want to invite all of the great fans in San Antonio to come out and to see a great fight. I don’t think that anyone there will be disappointed.

RingTV.com: Have you ever envisioned a fight with Chavez Jr. and, if so, how would that go?

GR: You know, I would love to fight Julio Cesar Chavez Jr. In that fight, I think that you would see a war. I think that our styles are perfect for each other and no one would be disappointed in it. I think that the guy who would win it is going to be the guy who is better prepared and in better shape. That would be 12 rounds of hell for the both of us and you know I’m going to win.